The addition of a third antibiotic is taking its toll. I feel icky, really icky. Just 3 more days of Cubicin via IV, and I am seriously counting the days. Swallowing my old friends bactrim & minocycline twice a day every day for the foreseeable future is easy compared to the Cubicin. It’s not as bad as the Biaxin was; holy Toledo that stuff was wicked bad. Not only did my tummy suffer its wrath, it messed with my mind, too, and I’m halfway submerged in the crazy pond as it is.  Pretty sad when I rank antibiotics the way most people rank the Sweet 16 teams. Wonder what an abx bracket would look like. I don’t even want to know.

I’m finding solace in things like homemade chicken & dumplings, sans chicken (thank you, Staci!) and a gigantic foil pan of homemade macaroni & cheese (thank you, Leanne!). Between the abdominal swelling from the Big Dig and the constant influx of simple carbs, I don’t have a thing to wear. But given the choice between barfing and shopping, I went shopping. 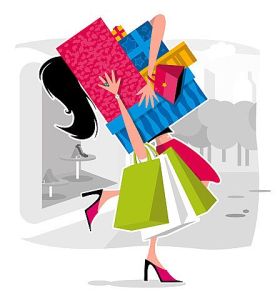 Urban dictionary defines “retail therapy” as the act of shopping as an outlet (pun intended?) for frustration and a reliever of stress. It’s also crucial when you have nothing that fits, despite your own mistaken impression that the ridiculously complicated surgery would actually improve your shape. Retail therapy is scientifically proven to cure what ails you. Imelda Marcos said it best: “Win or lose, we go shopping after the election.” Marcos’s kryptonite was new shoes. It’s estimated that she left behind 2,700 pairs of shoes when she fled Malacanang Palace in the mid-80s and felt the combined judgement of the world coming down on her. That’s a lotta shoes.

Well, I like shoes too, and while I certainly don’t have 2,700 pairs, I did need one more pair of cute but comfy shoes for strolling the wineries in Napa this weekend. Enter TOMS Shoes, and their awesome “One for One” campaign. You’ve heard about it: for every pair of TOMS shoes sold, TOMS donates a pair of shoes to a needy child.

It all started 5 years ago when a big-hearted and entrepreneurial guy named Blake Mycoskie noticed that kids in Argentina didn’t have shoes. Blake started the TOMS company, and quickly returned to Argentina with 10,000 pairs of shoes. As of last September, the company has donated more than 1 million pairs to kids all over the world. As you can see from the pics on TOMS website, there are now lots of happy kids looking quite stylish in their TOMS shoes. A million pairs of shoes. That makes Mrs. Marcos look like a bit of an amateur.

My question, of course, was why did a guy named Blake name his company TOMS? Who is Tom?

Here’s your trivia lesson for the day: there is no Tom. Blake is Tom. But not in an alias way; TOMS stands for the Shoes for Tomorrow Project. No, it’s not an acronym, that would be the STP, which I think is a motor oil. And sounds way too close to STD. Not a good marketing idea.

So Blake came up with the Shoes for Tomorrow Project, but discovered that the name was too long to fit on the label and the shoeboxes. He shortened it to Shoes for Tomorrow, but still had too many letters, so he went with the derivative TOMS. The end.

Disclaimer: this is not a paid endorsement for TOMS. I wish. But then that would negate the feel-good effect of getting a pair of shoes I love while also helping out a child who has no shoes. I bought my TOMS fair & square, and while I have no intention of turning this blog into the Home Shopping Network, it’s nice to have something to talk about besides cancer for a change. 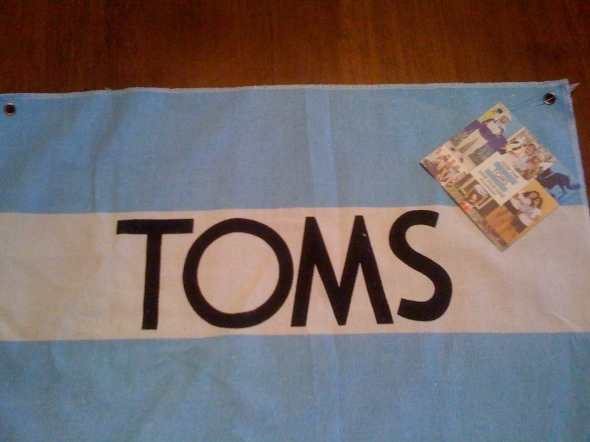