Most are familiar with Picasso’s 1955 sketch based on Cervantes’s Don Quixote. Done during his Blue, Rose, and Cubist periods, the “insightful, sassy, and ubiquitous” sketch has been described as “catchy and full of bright humor” by people who know a lot more about art than I do, but I do know that I’d be quite pleased to have those same attributes ascribed to this little blog.

The fact that Picasso’s sketch went on to become a minor masterpiece is funny in and of itself, but the idea that his inspiration for the masterpiece was a 5×9-inch nut-and-bolt sculpture of our literary hero and his trusty sidekick really makes me laugh. The little sculptures are themselves ubiquitous in Spain, and Picasso, who is said to have had a “sharp, roving eye” and to have been “constantly searching for likely subjects and was not hesitant to borrow from others” parlayed a simple souvenir into a bit hit. My eye isn’t as sharp, but it is roving and always on the look-out for inspiration for this little blog, so I like to think I have something in common with Senor Picasso.

Our recent and glorious trip to Napa provides me with a whole slew of inspiration. Today’s post is dedicated to Quixote winery. What an incredible place. They make great wine, too, BTW.

The winery was designed by Friedensreich Hundertwasser, an artist, architect, philosopher, and environmentalist from Vienna. “We’re here to give pleasure. With Cervantes’ Don Quixote as our muse, let us all explore the difference between appearances and reality and engage in the noble pursuits of a knight errant.” In designing and creating Quixote winery, he endeavored to “show how basically simple it is to have paradise on earth.” Well done, Herr Hundertwasser, well done.

Hundertwasser with René Brô in the Castiglione pavillon at Saint-Mandé near Paris in front of the mural they painted together, 1950 Photo: Hundertwasser Archive

Before I get into what makes this winery so darn special I must give a teensy bit of insight into Herr Hundertwasser. This guy was nuts, but in a good way. Not sure I’d want to be within spitting distance of him at a dinner party, but I sure do love his work. He’s a true artist, one who says wacky things like “Progression is retrogression and retrogression becomes progression,” and describes his paintings as “vegetative.” I believe him, too, because our tour guide at the winery told us that during the 10 years that Hundertwasser designed Quixote winery, he ran the California hills buck naked. He felt the need to become one with nature in order to impose this physical structure upon Her innate beauty. Hope he used a lot of sunblock. He believed in the power of nature, saying “You are a guest of nature. Behave.” This real-life Austin Powers was buried sans clothes and coffin, on his land in New Zealand in 2000 and a majestic tulip tree towers over his gravesite. Let’s all observe a moment of silence in honor of this nut-job artist.

Everything about this winery has character. Every single thing. Even the signpost, pointing the unsuspecting visitor toward an experience that will make ya go hmmmmm. Kudos to Doug & Amy Ashmore for suggesting this winery. In the multitude of wineries in Napa, it can be tricky to decide which ones to visit. The simple demands of time and liver space dictate that one cannot visit them all, so one must make choices. Listen, people: if you go to Napa at any point in your lifetime and fail to choose Quixote winery, I will never speak to you again.

And you’ll be missing out on an experience that defies words adequate to describe it.

This photo is tiny, and in all my Internet searching I couldn’t find one bigger, but look closely and you’ll see the man himself with a ruler. Only the ruler is bent. Because the man was too. He didn’t like straight lines, and the roof and floors of the winery are angled and slanted.

The winery itself is full of art. Cool stuff abounds, in the offices, even the restroom. This sculpture spoke to me. I love the lines, the exaggerated effects that all come together to tell a story. Then I read the story, on the front, and loved it even more: “Start a saloon in your own home. Go to your wife and give her a hundred dollars to buy a gallon of whiskey.” Now that’s a philosophy. 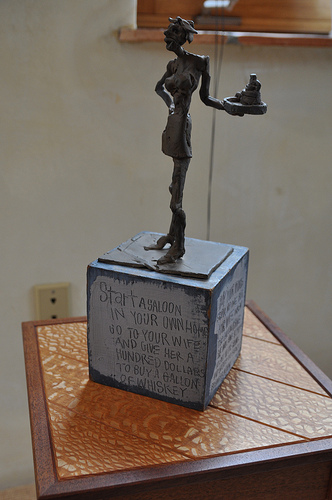 This creation was simply amazing. I don’t even know how to describe it, so here’s the rudimentary breakdown: cogs and wheels on the bottom powering thin metal spears upon which paper birds perch, and once the mechanism is engaged, flutter and fly at different heights and varying speeds. Wow. Just wow.

The column above and to the left, with the white body featuring a long crack, is emblematic of Hunterwasser’s genius. And his insanity. The story is that someone remarked within earshot of the artist that the building was ‘perfect.’ So he picked up a sledgehammer and smashed the column twice on purpose because nothing made by man is ever perfect. Though flawed, it can still be beautiful and even the imperfections can be delightful in their own right. Some said the crack should be “fixed” or covered up, but Mr H said no way, the crack is part of the beauty and tells an important story. What that story is may vary from person to person, but for me the story is that we are all flawed, yet remain upright. The Birthday Girl was also struck by this story, and immediately thought of my “cancer journey.” She made me pose for a picture in front of the cracked column, but I liked the artwork next to it more, so that’s the pic you’re getting.

The photo below is a photo of a photo in the tasting room at Quixote. I’d love to know the backstory, but suffice to say that I took this photo with Macy in mind, and fastforwarded many years to when she is a grown woman, and hopefully has a giraffe leaning in her window for a kiss. No idea who the woman is or what kind of relationship she has with that giraffe, and I don’t care. It’s a delightful portait of love plain & simple, and it made me think of my sweet little girl and her all-encompassing love for animals.

Hunterwasser’s goal in creating Quixote winery was to incorporate it into the existing terrain, and from the road, all you see is the golden turret on the far right. Mr H believed that a golden turret elevated man’s sense of self. 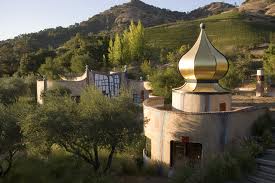 The path from the road up into the hills leads you to the white “tiled” entrance. Notice the curved line of the roof. No straight lines for Mr H.

Mr H believed that “color is king” and there is a feast of color for the eyes everywhere you look at Quixote, but sprinkled subtly and judiciously, so as to not overwhelm.

This photo is pitiful but is meant to convey the deep aquamarine of one section of a column. A small burst of color that expresses a whole lot.

More curved walls. I bet the contractor was ready to murder Mr H many times during construction.

The barrels are integral to every winery. Quixote’s barrels are colorful and expressive, natch. In the bottom photo, you can really see the slanted roof.

Even the windows, doors, and bookcases have character. The open doorway on the right leads into the tasting room.

The tasting room. The photo of the woman & her giraffe is on the ledge, just under the orange column. The light fixture was an explosion of white ribbon that looked more wedding bouquet than light. Beautiful.

And of course, the star of the show.

The tasting was sublime. Delicious wine with cheese & crackers peppered with charming asides about the artist and the process that resulted in Quixote winery.

Trevor and Keith soaking up the patio after the yummy tasting. Keith is utilizing one of the built-in stools that are conveniently placed there for the spent wine-taster.

There exists a group photo of us on this patio, but I can’t find it and am frustrated by looking. Lisa? Thad? Diana? Whoever has it, send it to me, por favor.

The road to Quixote winery leads to an experience I’ll never forget. The art fed my soul. The design amazed my senses. The man who is Hunterwasser wowed me. The wine made there satisfied me and made me smile. And the time spent in that spectacular place with forever friends sustains me. 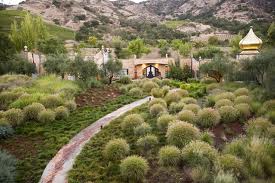 3 Comments on “Quixote deserves a post of its own”