This morning’s watch party, aka reason to open champagne at 9:00 a.m., was a smash success. We had all the elements of a good party: fun people, plenty of good food, copious amounts of alcohol, and high-quality people-watching. 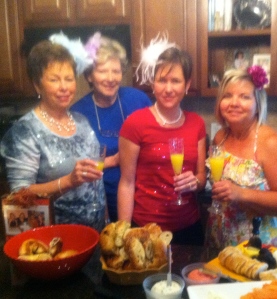 The ladies sported fascinator hats popularized by the new Duchess of Cambridge. Seems fascinators have become all the rage since the ever-fashionable Kate favors them. Mine was the lamest one at the watch party, because it was a last-minute addition to my garden-party frock and in the interest of full-disclosure, is a clip-on flower belonging to Macy. I grabbed that out of Macy’s hair-art drawer right before the party started rather than fashioning a fascinator out of feathers, as our guests did. Jill’s mom, Joan (visiting from St. Louis) and my mother-in-law, Jody (visiting from Kentucky) had grey and lilac feathers respectively. Jill’s was blush pink, and all were lovely.

They paled in comparison, however, to Keith’s head-covering.

Embracing the royal occasion and tradition of “frivolous, oversized hats,” Keith came up with the mother of all hats. Whimsically created with found objects, this inspiring chapeau featured a jaunty elephant, which provided the height so desired in an outlandish hat. Candace from “Phineas and Ferb” contributed a nice diagonal line and bolt of bright red. The one lone eyeball from an unseen creature in the center of the hat sends a playful yet contemplative message.

I hope those girls Beatrice and Eugenie don’t get wind of Keith’s creation. They might storm the party and gobble him, and his hat, right up. 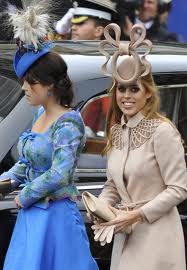 It’s been said that these girls were trying to send a snarky message because their mom, Sarah Ferguson, was purposefully excluded from the royal wedding. Sweet Lord, I hope that’s the reason they chose those hideous hats.

Yesterday I wrote about William perhaps missing his mom, Princess Diana, on his special day. In my effort to avoid seeing any photos or footage of the royal wedding before my delayed watch party, I didn’t hear anything about whether there were intentional efforts by the newlyweds to include Diana’s memory, so I was super happy read this quote from William, about giving his mom’s engagement ring to his beloved: “It’s my mother’s engagement ring. Obviously she’s not going to be around to share any of the fun and excitement of it all — this was my way of keeping her close to it all.” Very nice, Wills.

There were several intentional tips of the hat (or fascinator) to Diana. Kate selected the same flowers that Diana had in her bridal bouquet. The Sweet William and lily of the valley flowers made for a demure bouquet that carried a powerful message.

Kate’s mom, Carole Middleton, chose a dress that was designed by one of Diana’s favorite designers, Catherine Walker.

Diana worked with Walker for much of the 16 years between her wedding to Charles and her untimely death, and it’s estimated that Walker designed some 1,000 frocks for the late princess, including the black dress in which Diana was buried. Walker is credited with some of Diana’s most iconic outfits.

I was glad to see that William and Kate made such an endearing effort to include Diana in the wedding. This screen shot of William next to a photo of his mama makes my heart sad and glad at the same time. Genetics are a powerful thing, and the mannerisms that parents impart to children, unbeknownst to the child, speak volumes. The fact that William exhibited the same nervous half-smile with a slightly bowed head that his mama used to exhibit is a small shard of hope that exists after the loss of someone dear. I’m sure Diana would have given her eye teeth to have been at that wedding, but hopefully she was shining down on the newlyweds and emitting some powerful motherly love.

My favorite image from the day was not of either William or Kate, nor a celebrity. 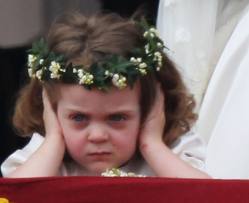 It was William’s goddaughter, standing next to Kate on the palace balcony after the ceremony. There was a cool flyover of vintage fighter planes, and it must have been too loud for this little darlin. She reminds me a lot of the little darlin who lives at my house.

Here’s the tiniest member of the royal wedding party silently protesting, while the newlyweds share a smooch in front of the immense crowd. 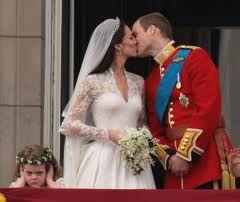 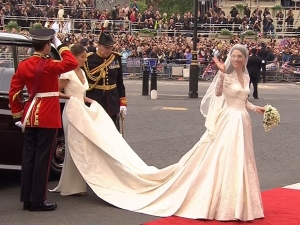 and in her second outfit for the after-party, which something tells me Diana would have given an enthusiastic two thumbs up.

I think Kate would have similarly approved of our fascinators.