← Cinco de Mayo
A blow-out end to my cancer-versary →

I’m not going to get all nostalgic and

wonder where the time has gone, but it’s fun to see the “before” and “after” pics as my baby boy grows up. His face hasn’t changed all that much, even after 12 years.

This birthday started off like all the others, with a special birthday breakfast on his personalized plate. The menu may change over the years, but the plate is the same.

He was impatient, like his mama, and decided he was ready to enter this big, wonderful world a little ahead of schedule. In fact, I hadn’t finished my birthing classes or packed my hospital bag when he announced that he’d be making his way into the world. Me being a schedule-driven kind of person, and not having finished the classes or read ahead in the What to Expect When You’re Expecting book, I didn’t realize that when your water breaks, your baby is going to be born, whether it’s ahead of schedule or right on time.

That was my first lesson in parenting. The lessons continue to come, 12 years later.

We’ve learned a lot in the last 12 years, about how fun little boys are, especially this boy. As a baby, he was always smiling, eternally happy, and we learned that he had the most infectious giggle. I know, I know, every parent thinks their kid is special, but when it came to giggling, he really was.

This kid smiled all the time, and didn’t care if he was hot or cold, wet or dry, he smiled. As long as he wasn’t hungry, he was happy.

We got used to seeing that big smile that lit up his whole face. Nowadays, he’s a bit less gratuitious with the smiles, but when he does offer one, it’s golden. 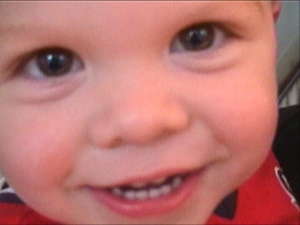 His hair used to be golden, too, come to think of it. How precious was he??? 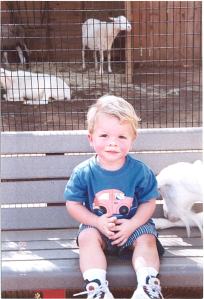 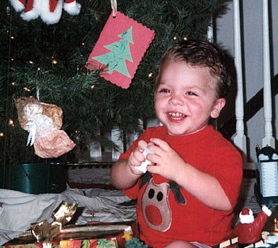 This is a rare shot of him not happy & smiling. Must be the fact that his shirt says Harvard and not Duke that’s got him down. 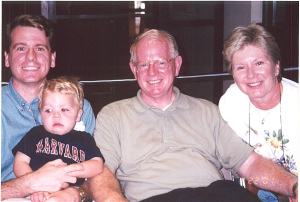 Whether sporting an ear-to-ear grin or a shy smile, Payton was such a happy guy and such an easy baby.

As he got older and his smiles became less plentiful, there were still times in which he knew he was obligated. This kindergarten school picture is my favorite example. He knows he is supposed to smile, and he will, but everyone’s gonna know it’s not his idea. 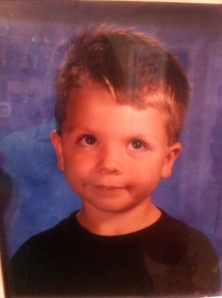 Every once in a while I can still get him to strike a pose.

In the early days, he loved cars & trucks & things that go. In fact, that was the name of one of his favorite books, by Richard Scarry, and one double-page spread features a huge pile-up of all the vehicles in Busytown. We’d spend hours looking at that one page.

P and his friend Brock spent a lot of time playing with Matchbox cars, dump trucks, school buses, and anything with wheels. 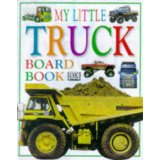 We read this book so many times, it fell apart. Literally. We taped it back together but eventually had to buy another one. That child knew the name of every type of construction vehicle and from a young age could distinguish between an articulated dump truck and a lowboy. Lucky for him, living in Houston and driving on Hwy 59 afforded us lots of glimpses of all kinds of trucks. When we happened upon a construction site, it wasn’t at all unusual for me to pull over so he could watch the trucks.

His 2nd birthday party had a fire truck theme. I still have this little outfit, hanging in his closet.

Before his 3rd birthday party, he would become a big brother to Macy. Oh, how his world changed when that little girl entered the scene. He was very protective of her, and yelled at a lady who admired Macy in the grocery store: “DON’T LOOK AT MY BABY!”

Seeing his baby sister for the very first time, the day she was born. He was probably ready to go home and play with his Thomas the Train set.

Macy’s pretty good at looking out for herself these days, but I hope her big brother always protects here nonetheless. The day we came home from the hospital he held her briefly on the couch while Maddy the wonder dog supervised. May he always be there to carry her beach pail. 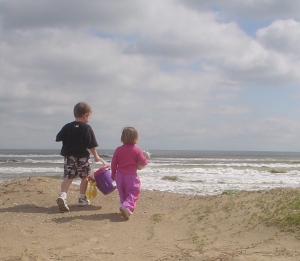 Pay’s  love of trucks was soon replaced by his love of baseball. He had an athlete’s body from Day One.

At age 2, he was hitting a pitched ball, and he hasn’t stopped yet. Some of the best-ever days were spent under the big tree in our front yard in Durham, Payton wanting nothing more than to hit a pitched wiffle ball, over and over.

We spent a lot of time in that yard playing baseball, and his love of the Red Sox was established early and took root. I’ve lost count of how many Red Sox shirts that boy has, but I can safely say a lot.

Every Halloween his costume has been a version of a baseball player, with the exception of Luke Skywalker one year.

Pay turned 5 right before we left North Carolina to come home to Texas. We celebrated Pay’s birthday that year at the Durham Bulls minor league ballpark, and he got to race Wool E. Bull, the team mascot. You’ve never seen a more determined runner. He used to pump his left arm when he ran. Wonder when he stopped that. 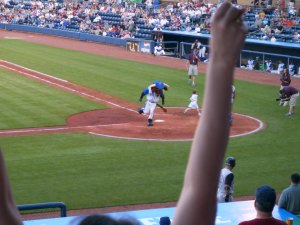 No more truck-themed parties for this boy. It’s been all-baseball, all the time for many, many birthdays.

Back home, our little slugger started kindergarten. I love that his backpack is almost as big as he is on the first day of school.

And yes, he’s wearing his beloved Red Sox jersey, with #5 on the back for his hero, Nomar Garciaparra. I still have that jersey, too. It’s such a piece of Payton’s personal history. Now it seems so tiny I can’t imagine how he used to fit into it, but he did, and he wore it often.

He played his first Little League season that kindergarten year. It was the first of many seasons we’ve spent at the ball fields.

Way back then and to this day, I can always spot him from afar when he’s standing on base. There’s something about his body language that changes when he’s on the field: heightened awareness, ultra-alert, and 100 percent in his element. He looks like such baby compared to the first baseman for the other team.

No matter what uniform he wears, he plays his heart out and strives to win. He’s all business on the field, and in between innings, when his team is gathering hats & gloves to take the field, he’s always the first player on the field. 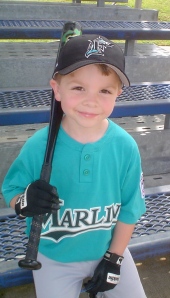 To him, 2nd place might as well be last. The few times his team has come in 2nd, we’ve had to hide the 2nd-place trophy for a few days, until he gets over being a sore loser. Lucky for him, his team usually wins, and his trophy shelf runneth over.

Some of my all-time favorite pics of my boy and his favorite sport; practicing to be a major leaguer, listening to the National Anthem: 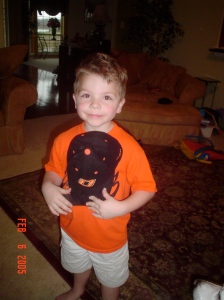 A little kid in a big stadium:

Showing off all those teeth, ecstatic to be back in Boston heading for Fenway: 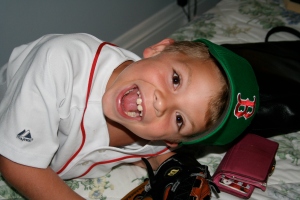 Lounging at a Galveston beach house, wearing the home-town team shirt for a change: 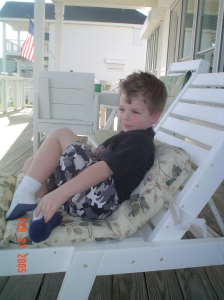 Watching the home-town team with Dad a few weeks ago:

Occasionally he wears a shirt not featuring a baseball team, and it looks like this. Hamming it up with his ladies:

And chilling with us, too: 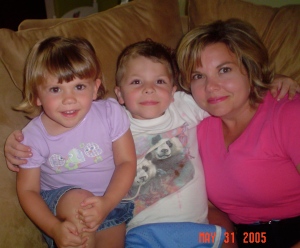 Occupying the office of Sugar Land mayor for a bit: 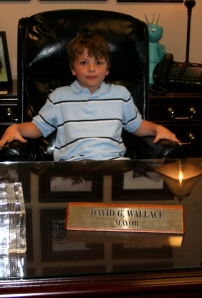 Even more rare than a photo of Payton not in a baseball shirt is a photo of him bundled up. This kid despises wearing warm clothes, so savor this shot of him playing in the snow in Durham. You won’t likely see it again anytime soon. In fact, when we left Texas for North Carolina, he didn’t even own a coat. We bought that one there, and probably left it there when we came home. 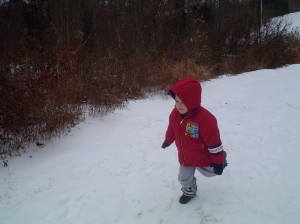 Other than a baseball uniform, I think the last time he wore long pants was at my mom’s funeral. He was in 1st grade. No way I was getting him in a suit, though, like his cousin Andrew, and I could almost hear my mom chiding me to leave the poor boy alone. She wouldn’t have cared if he’d come to her funeral in a Red Sox jersey.

He loves to play outside–preferably in shorts & a t-shirt– and learning to ride a bike without training wheels was a big day.

He’s a junk-food-junkie who thinks one serving a day of fruits & veg is one too many.

I think he was more excited about the corn dog than being at the Texans’ game when Monday Night Football came to Houston this year. Great seats and a field pass, but all that boy could talk about was the grub.

The first time he caught a fish, he was so excited to eat it, but when he tasted it, he wasn’t so sure about it. 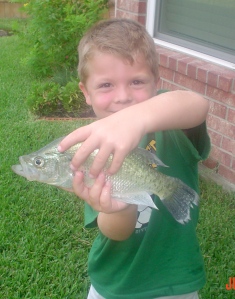 I love the look on his face as he takes his first bite.

Whether in full color

Whether his hair is long

or somewhere in between,

I adore this child and am so glad he’s mine. Can’t wait to see what the rest of your life looks like, son.

6 Comments on “I’ll call him Twelvie”