← Baseball blues
Life is so uncertain → 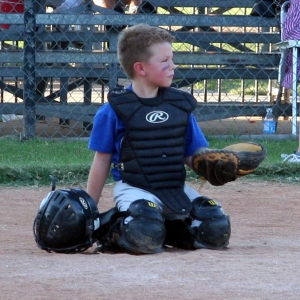 I mentioned in a previous post that Payton got his baseball skills from my dad, and then I remembered that my dad made Payton a scrapbook for his 8th birthday of his (Dad’s) athletic memories.  It’s pretty cool. My dad is a good writer, and he has an amazing memory. He remembers things like the score of a particular game in 1956, and all the names of his teammates from high school. It may be a few years more before my kids appreciate the heritage that my dad has presented them, in the form of his narrative, photos and press clippings, but it will be there, when they’re ready.

P’s baseball lineage is the real deal. I wish we had home movies of my dad playing baseball, because I’m guessing his body language and motions looked a lot like Payton’s. In fact, there are certain ways in which Payton stands or walks that really remind me of my dad.

In the cover page of the scrapbook, my dad wrote a letter to Payton in which he said, “I cannot begin to tell you how much fun, excitement, pleasure and enjoyment I had as an athlete. Also, I met many new people who have remained my friends all my life. I know how much you love playing, and I hope you continue to play and that when you conclude playing, that you have as many fond memories as I still have today.”

And my favorite part of the cover letter is the P.S.:

“Remember to always be nice to your Mom. You will never have another person in your life who will care for you and love you as much as she does.”

And that’s the truth.

My favorite article in the scrapbook is the one entitled “Hard-Hitting Katapodis Adapts to ‘Bad Luck’ Breaks.” There’s no date on the article, but it was his junior year so it was in the late 1950s. The article starts by saying “The Aggies better watch out. At least that’s the prophecy given after hearing Golden Hurricane baseballers such as right fielder Leon Katapodis say, ‘I’d give anything I’ve got to beat the Aggies.'”

Now I know where Payton gets his trash-talking skills, too.

The article goes on to say “Probably wielding one of the heaviest bats as he has in other games this season will be Katapodis, who pounded out three singles and two doubles in eight tries agaist Northeastern State Saturday.” Sounds a lot like my son.

How about this for continuity among generations: ” ‘Kat’ as he is generally called has a long baseball history just as most other Hurricane diamond-men. After spending three years in the pee wee league and one in junior play, he graduated to Legion ball. Both his legion teams ended up in the state finals.”

Assuming Payton’s team emerges victorious from the sectionals tournament that begins tonight, he too will get going to the state finals.

We’re ready, but not assuming anything. We’re superstitious, like most baseball folks. The boys on the team each collected a sample of dirt from our home field last night, scooping the dirt into baggies, empty water bottles, and even an empty Altoids tin. They’ll sprinkle the home-field dirt on the field where they play tonight, bringing a bit of local mojo to the game.

Several boys on the team got mohawks after clenching the District championship, and several of the moms got baseball-inspired pedicures. 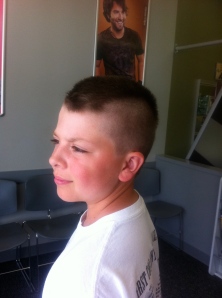 I’m not generally a fan of publishing photos of toes, as most of them are pretty weird looking, but you gotta see this: