← Victory after tragedy
Extra! Extra! Read all about the mighty Red Raiders →

All hail the Raiders!

The mighty Red Raiders beat the Pearland All Stars 15-6 last night to clinch the Sectional title. Cue the music.

You know what this means, right? We’re going to Tyler.

Payton upheld all of his superstitions for this series: wearing the same pants for each game since the last win, no matter how filthy with infield dirt and grass stains; eating the same meal after each game won; following the same schedule during the day on game days. Macy and I joined in the festivities and put red streaks in our hair for the do-or-die game last night.

Here’s the local story about last night’s glorious game. Hope you’re smiling as widely as I am after you read it.

What a sweet, sweet victory. Readers of this blog may have heard about the utterly crummy season this girl had last year, and how yours truly missed every bit of the Raiders’ victories and trip to the State Championship.

What a drag. Words fail me as I try to express just how crappy it was to miss all this last summer. I’m not sure if it’s even possible. I have tried, but I know I’ve come up short.

All throughout the All Stars series so far, part of me kept thinking, “wouldn’t it be nice if the boys won District and Sectional, and got to Tyler, again, so that I could see it this time?” But another part reminded that part that it’s not about me. It’s about the 11 boys on this team.

Lucky for me, those 11 boys came through and I WILL get to see it this time. I am one happy baseball mama.

I woke up the night before last, after our team beat the Pearland team to stay alive, thinking about the next game. All day yesterday, the day of the winner-take-all-loser-goes-home game, my thoughts kept turning to baseball. Payton was uncharacteristically nervous yesterday, and had a hard time eating his pre-game meal. Walking up to the fields yesterday, we had to pass the Pearland fans in their bleachers to get to our bleachers. There were a lot of them, and they were fired up. But when we got to our bleachers, we saw a sea of red. Folks turned out in droves to support the Raiders. Members of the 12-year-old All Star team lined the outfield fence and had 3 big flags, each with a different letter: F, C, and A for “First Colony American.” Those flags were flying even before our boys stepped onto the field.

The Raiders looked a tad bit shaky as the Pearland team came up to bat. It was 3-0 them to start, but the boys in red looked strong and confident. I knew they were going to come through, and by the 3rd inning it was 9-4 us. While anything can happen in baseball, I began to really and truly realize that we were close to clinching the coveted trip to Tyler, and that I was going to be there for it.

I’ve said it before, but it bears repeating: watching my kid on the field is one of life’s greatest joys for me. He’s in his element, doing what he loves most in the entire world. He’s energized and engaged, he’s a gamer. Baseball is his life, and he makes the most of it. Every single game. Seeing #11 come up to bat thrills me; watching his discipline at the plate, appreciating the mechanics of his swing, and hearing him make contact with the ball all work together to fill me with happiness. Knowing that he’s experiencing success in his most beloved endeavor is parental bliss.

The game was fantastic, and last night’s victory is so, so sweet. I’m still savoring it today, exhausted though I may be from the late-night celebration.

Seeing Payton on the field with his team after the game, awaiting their Sectional banner and pins from the District Commissioner was pretty great. 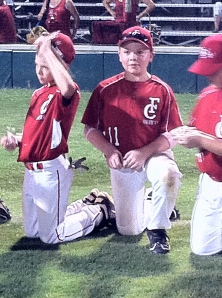 Seeing the boys come together and play like champions was redemption for a crappy summer last year. That summer will go down in history as the worst one ever. This one will be remembered as the best.

6 Comments on “All hail the Raiders!”