If you’re looking for a laugh or an inspirational story, you’ve come to the wrong place. I’m in a funk and there’s no amount of lipstick that’ll pretty up this pig (the funk, not me). My thoughts are scattered like leaves falling off a tree (if only that conjured up visions of the russet colors of fall, of leaves parachuting off of trees as they ready themselves for the change of season. That does happen in some parts of the world, but here, in the land of eternal summer, and in this infernal record-breaking, never-ending summer, the only leaves falling from the trees are brown and crackly, dead from the drought. How’s that for a cheery thought?).

I’ve been struggling the last few days. I’m frustrated with the pace of the healing from the latest surgery–yes, I’m a whole lot better, but I want to be done. I’m madder than a wet hen about the effect of the last surgery on my tennis game, and wonder if I’ll ever get my serve back. I’m worn out from the swirling, worrying thoughts of whether I’ll ever have the results I want. I’m both impatient for and dreading the next round of revision. I’m tired of being tired. I’m pissy about the fact that I’m still battered and sore. I’m ready to rip the port right out from under my skin because it catches on my clothes and shoots a sick sensation up my neck that reminds me the damn thing is sewn into my jugular vein. Oh, and it looks weird, too. I’m sick of cancer and all its many fallouts.

Normally, my solution to such a funk is alcohol. Lots of alcohol. Every night is ladies’ night when the funk shows up at my house. But there’s a niggling voice in the back of my head reminding me that alcohol is a major contributor to breast cancer, both initially and in terms of recurrence. And since not a day goes by that I don’t think about recurrence, perhaps I should avoid using alcohol as a balm for my beat-up soul. Dammit. Yet another way cancer has wreaked havoc in my world. If I can’t in good conscience comfort myself with booze, I’m in real trouble. This is no fun. 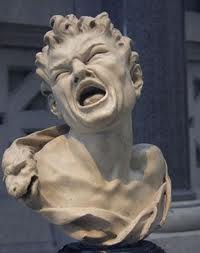 When I was diagnosed last year, Dr Dempsey gave me a stack of play money. She handed it to me and said it is very important currency. Each “dollar” bill was a free pass to be in a funk. To throw a fit. To have a pity party. As she put it, “to lay in bed watching Lifetime and eating ice cream.” I laughed and thought, pfffft! I won’t need that. I got this. Me and my positive attitude can kick this cancer no sweat.

While I am happy to report I’ve spent not one day in bed watching Lifetime and eating ice cream since cancer shat upon my head, I’m thinking I may need to pull out one of those dollars. How crazy is that — after all the crap I’ve been through, after seeming like I was finally getting close to the finish line, now I fall into the funk?

Don’t worry, I’ve already run through all the reasons I have to be happy: I’m alive, the worst is behind me, I’m not in the hospital, I have neither drains nor a wound vac attached to me, I’m cleared for exercise, I have great doctors and comprehensive insurance, I have a stellar support network, blah blah blah. Yes, all of that is true, and I know in my heart of hearts that there really is more good than bad  in my life. I know that one day this whole “cancer journey” will be a speck of dust in my rearview mirror as I travel along the grand highway of a happy life. But right now, the funk rules.

Those of you who are within shouting distance have been hearing about it. The frustration, the impatience, the pissy-ness. What you won’t hear, though, is “Why me?” because really, does it matter why? Not so much. What matters is how ya sweep up the mess that’s dumped on ya, and most days I’m armed and ready with the broom & dustpan. But for now, I’m frustrated, impatient, and pissy. And mad. I’m mad, too.

I’m mad that this damned cancer “journey” has to be so hard for so long. I’m all for rolling up my sleeves, gritting my teeth and getting through it. I fully support Winston Churchill’s idea of “If you’re going through hell, keep going.” I believe Eleanor Roosevelt 100 percent when she said “A woman is like a tea bag — you never know how strong she is until she gets in hot water.” I gather strength from Robert Frost telling me “The best way out is always through.” But geez, does it really have to be this arduous? The ways in which cancer robs us are seemingly endless, and breast cancer in particular is a repeat offender, a pathological thief.

I just read this article, “What’s It Really Like to Live Through Breast Cancer?” Today especially, I needed to hear other women’s stories. Valerie, age 52, said that “she needed symmetry. She needed things to be as they should. She needed, after two years of surrendering to the opinions of doctors and the input of the cancer Web, to have an ounce of control over her body.” Yeah, me too.

Renee, age 47, said that “when I had her mastectomy sutures taken out, I asked the surgeon to remove the Sharpie mark she’d made—the black line that went across my ribs like a big smile—and the surgeon asked what line? I pointed. Her eyes got big and she said, ‘That’s your incision, Renee. We opened up your body. We removed a lot of tissue.’ ”

There are lots of Valeries and Renees out there. One in eight women will be diagnosed with this dreaded disease in the United States alone. Worldwide, there are 1.3 million new breast cancer diagnoses a year. That’s more than a million women who will endure this disease. Of them, some 465,000 will die from it. But even those who survive it, like me, will carry the weight of the disease. The physical scars Renee spoke of are nothing compared to the emotional ones. People say we’re lucky that our cancer occurs in a body part that can be removed. True, but it also means that we see evidence of that cancer every day; if I had a kidney removed, I wouldn’t be confronted by the railroad tracks of a long, harrowing journey every time I undress.

Sure, it’s better to be scarred than dead. No question. But being alive doesn’t mean I have to be happy all the time. It doesn’t mean I won’t get in a funk and be frustrated, impatient, pissy, and mad sometimes.

But the funk will pass, hopefully sooner rather than later. Like in Carl Sandburg’s beautiful little poem, the funk, which can come in like a herd of elephants or on “little cat feet,” will overlook my city “on silent haunches,” and then move on outta here.

10 Comments on “Welcome to funk-ville, population 1”