“Sometimes I have to let go and mother myself, kiss the hurts away. Tell myself that sometimes bad things just happen. But writing about it helps a lot, it scrapes it out of the dark corner, holds it up to the light and somehow heals the wound. It borders on miraculous.”

I have no idea who wrote these words. If any of y’all know, will you tell me? This quote spoke to me, though, at some point, because I wrote it down, and today as I cleared off my desk I found it. Scrawled on a scrap of paper and placed in my “I’ll get to this later” pile, the quote has lingered, waiting for me to get to it. How very patient.

I’m pretty sure I didn’t write it (although I wish I had). Perhaps it spoke to me because of the idea of having to mother myself. Being a motherless daughter, I don’t often think about mothering myself, and yet I do. Making myself go to bed when instead I want to stay up all night reading my current favorite book. Being diligent about pulling that load of shirts out of the dryer and hanging them up instead of letting them sit indefinitely in a wrinkled heap. Wiping up the spills on the stove top now, not later, before they’ve hardened into an indeterminate glob of laminated goo.

In the early days of navigating life without my sweet mama, I actively avoided any mothering that might come my way. That hole in my heart was too new, too raw to allow anyone else to even attempt to approximate any of the things my mom did. Seven years later, I still eschew any overt mothering. Somewhere along the way, though, I must have started mothering myself a bit. I certainly don’t hold out any hope that the hurts can really be kissed away, although I do tell myself often that bad things just happen. Telling myself that doesn’t help my innate desire to question, to wonder about the reason, or to pick things apart in a futile effort to figure them out. Sometimes it just is.

Writing about the things, whether the bad things or the confounding things, does help. Perhaps that’s the line that most spoke to me in the above quote. Perhaps that’s the reason I jotted the quote on a scrap of paper and put it in the pile on my desk. I’m a big believer in writing as healing, which I why I sit in front of my computer, keyboard clacking away as the words fill the screen. For me, just getting the words out of my head and the thoughts onto the screen is therapeutic. 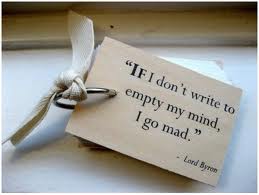 Writing about the good stuff and the funny stuff is important, but writing about the bad stuff is even more so. Like the mothering I inevitably do for myself, writing about the bad stuff helps make it better. Somehow it purges the toxic stuff from my soul and helps filter the insomnia-inducing worries that blanket me after the lights go out and the house is quiet. No matter how much distance I try to put between myself and the cancer “experience,” those worries return. Sometimes it’s the fleeting thoughts before a routine oncology visit, and sometimes it’s a more concrete feeling. Sometimes it’s a visceral assault, like the smell of the hospital that fills my senses when I’m just visiting. Sometimes it’s a random trigger that takes me back to the heat of the battle. Regardless of the form or the impetus, the worries remain. Hence the need to write. Hence the need to read the stories of others who have walked this path. Ray Bradbury explained it perfectly:

“If you stuff yourself full of poems, essays, plays, stories, novels, films, comic strips, magazines, and music, you automatically explode every morning like Old Faithful. I have never had a dry spell in my life, mainly because I feed myself well, to the point of bursting. I wake early and hear my morning voices leaping around in my head like jumping beans. I get out of bed to trap them before they escape.”

Knowing that I can drown out the insomnia-inducing worries with the “morning voices” is sublime. It borders on miraculous.

14 Comments on “Trapping the jumping beans”