Eulogy for the Martyred Children

On September 18, 1963, Martin Luther King, Jr., delivered the eulogy at the funeral for three little girls — Addie Mae Collins, Carol Denise McNair, and Cynthia Diane Wesley — who were killed by a bomb as they attended Sunday school at the 16th Street Baptist Church in Birmingham.  The fourth victim, Carole Robertson, was remembered in a separate service. 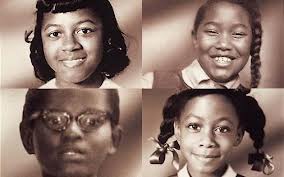 Robert Chambliss, a member of the Ku Klux Klan, used 122 sticks of dynamite to send a racially motivated message and end the lives of four innocent girls. The bombing became a turning point in the Civil Rights Movement, and the eulogy seems eerily prescient as the first victims of the Sandy Hook Elementary School massacre are laid to rest.

While Dr King’s speech addressed racism and segregation, the ideas he expressed in the eulogy apply to the bloodshed at Sandy Hook. As I contemplated the start of many funerals in Newtown, CT, I was compelled to re-read Dr King’s words and am stunned at how much they apply to our current-day tragedy. Yesterday, Noah Pozner and Jack Pinto were buried, and today funerals were held for Jessica Rekos and James Mattioli. As I try to wrap my head around the idea of tiny caskets holding 6-year-old children being lowered into the ground, I imagine Dr King shaking his head at the fact that while great strides have been made in racial equality, innocent children continue to die at the hands of disturbed men with weapons. Nearly 50 years have passed since Dr King spoke these words, and yet here we are again mourning the senseless loss of unoffending, innocent, and beautiful children.

“This afternoon we gather in the quiet of this sanctuary to pay our last tribute of respect to these beautiful children of God. They entered the stage of history just a few years ago, and in the brief years that they were privileged to act on this mortal stage, they played their parts exceedingly well. Now the curtain falls; they move through the exit; the drama of their earthly life comes to a close. They are now committed back to that eternity from which they came.

These children—unoffending, innocent, and beautiful—were the victims of one of the most vicious and tragic crimes ever perpetrated against humanity.

And yet they died nobly. They are the martyred heroines of a holy crusade for freedom and human dignity. And so this afternoon in a real sense they have something to say to each of us in their death.

They have something to say to a federal government that has compromised with the undemocratic practices of southern Dixiecrats and the blatant hypocrisy of right-wing northern Republicans.  They say to each of us … that we must substitute courage for caution. They say to us that we must be concerned not merely about who murdered them, but about the system, the way of life, the philosophy which produced the murderers. Their death says to us that we must work passionately and unrelentingly for the realization of the American dream.

They didn’t live long lives, but they lived meaningful lives. Their lives were distressingly small in quantity, but glowingly large in quality.”

5 Comments on “Eulogy for the Martyred Children”