← T-rage
This day in history → 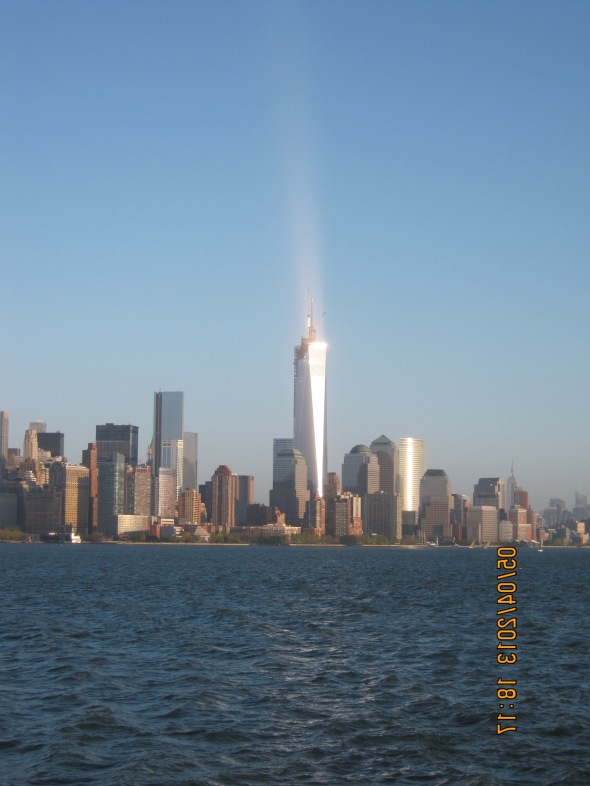 Yesterday I wrote about the anniversary of the September 11 terrorist attacks and my friend M, who I met through this little blog, sent me this photo. It’s the new Freedom Tower, built on the site on which the former World Trade Center stood. M and her son visited New York City this summer and happened upon this beautiful convergence of the financial district skyline and the new building as the sun was setting. The result: a stunning light shining from the new tower.

Looking at the play of light suffuses me with warmth, and it calls to mind the visual my yoga teacher uses while instructing us to concentrate on our breath. She says to imagine our slow, long, belly-tightening exhale as a plume of breath exiting through a small hole in the top of our heads. A concentrated ridding of toxins and stale air. That’s what I think of when I see M’s photo: out with ruin, in with new life. Signs of life.

The Freedom Tower stands 1,776 feet tall and, according to the Lower Manhattan Development Corporation,”serves as a beacon of freedom, and demonstrates the resolve of the United States, and the people of New York City.”

Surrounding the tower is the Reflecting Absence memorial, which pays tribute to the 2,986 men and women who died on that terrible day. I visited the memorial in February while on a girls’ trip with my bestie Yvonne, and I still haven’t found the words to describe the experience. It was a brutally cold, insanely windy day — I think the temperature was 27 degrees, which is this Texan’s version of hell — but the discomfort the weather provided seemed fitting as I began my trek toward the memorial. I walked from our Times Square hotel to Lower Manhattan, freezing my tail off the entire way. This idyllic shot of Central Park blanketed in snow looks tranquil, but within that tranquility were some mighty cold temps.

As I reached the Financial District, I noticed an increased police presence around the memorial — a sad reminder of the lasting effects of the terrorist attacks. Ditto the incredibly long process of getting through security to enter the memorial.

The memorial contains two giant pools of cascading water, each set where the Twin Towers used to be. The walls of water are the largest man-made waterfalls in the United States, and the deep, dark pit in their centers are an incredibly powerful symbol. The brochure from the memorial says that the pools are intended to be “a reminder of the Twin Towers and of the unprecedented loss of life from an attack on our soil.”

The names of those killed that day in New York City, Pennsylvania, and at the Pentagon are inscribed onto waist-level granite surrounding the pools. The six victims of the 1993 World Trade Center bombing are included as well. Seeing all the names is powerful, especially upon the realization that the names stretch all the way around the massive pools. Seeing multiple references to unborn children is crushingly sad. 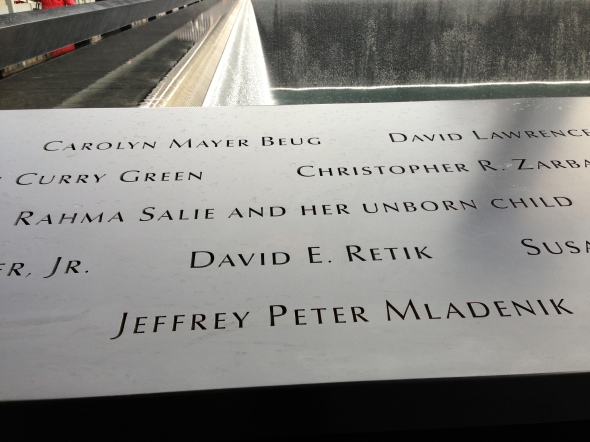 I also wonder why we need signs such as the one pictured below. Do people really have to be told not to scratch or sit on the panels containing the names?

And do people need to be told not to throw anything into the pools? Were I to see someone scratching, sitting or throwing things in this sacred place, I’d be sorely tempted to push them into one of the pools. 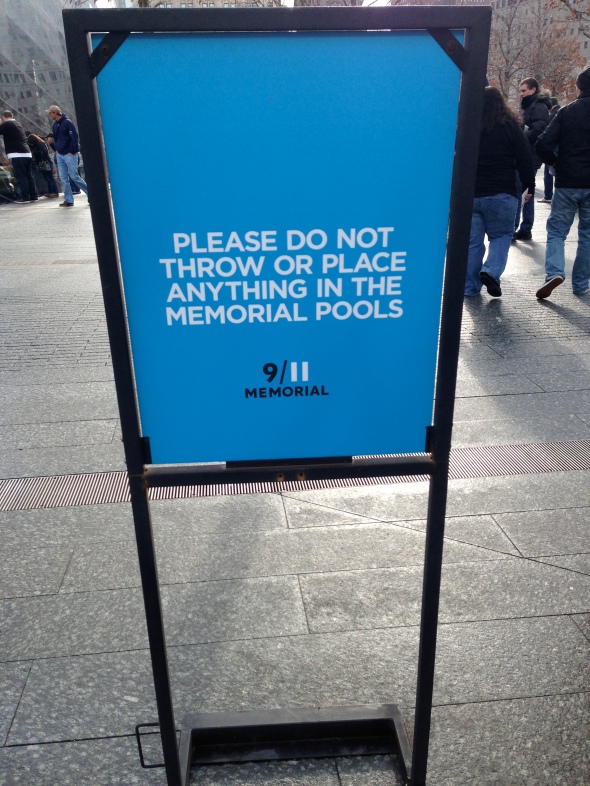 A shot of the Freedom Tower while still under construction.

The Survivor Tree, pictured below, is yet another symbolic piece of the memorial. (Apologies to the unnamed tourists who ended up in my photos.) 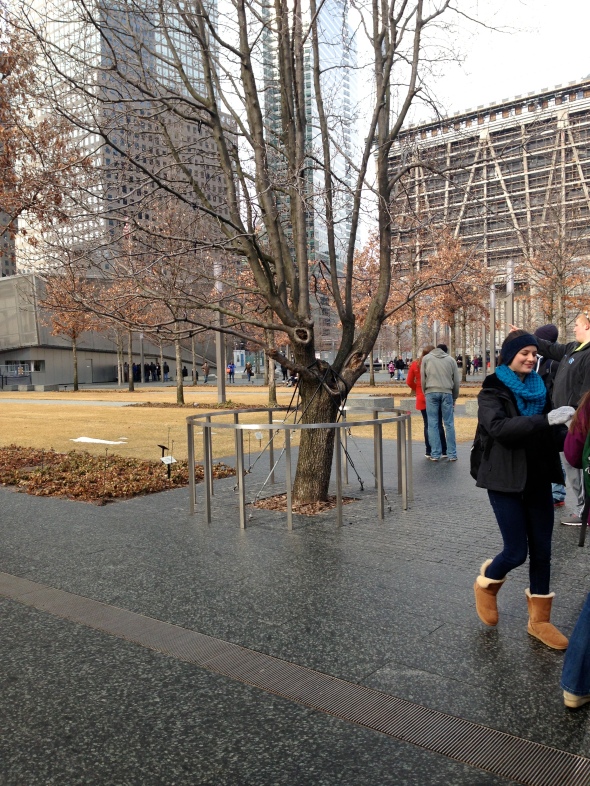 According to the memorial’s blog, The Memo, this tree endured the terrorist attack at the World Trade Center. A few weeks after the attack, the blackened, leafless tree was discovered in the rubble in the plaza of the World Trade Center. The ornamental pear tree was originally planted in the 1970s between buildings in the World Trade Center complex. Before September 11, the tree was tall and full. When it was uncovered after the attack, it was an 8-foot-tall stump with broken roots.  “The tree is a testament to our ability to endure,” Mayor Michael Bloomberg said. After the attack, the tree was nursed back to health at a nursery in the Bronx, where caretaker Richie Cabo said “It looked like a wounded soldier. When I first saw it, I thought it was unlikely it would survive.”

By the spring of 2002, though,  the tree showed signs of life, and Cabo knew the Survivor Tree would survive. “It represents all of us,” said Cabo. and the then-8-foot-tall stump with broken roots is now a 30-foot tall thing of beauty and is a popular site at the memorial. 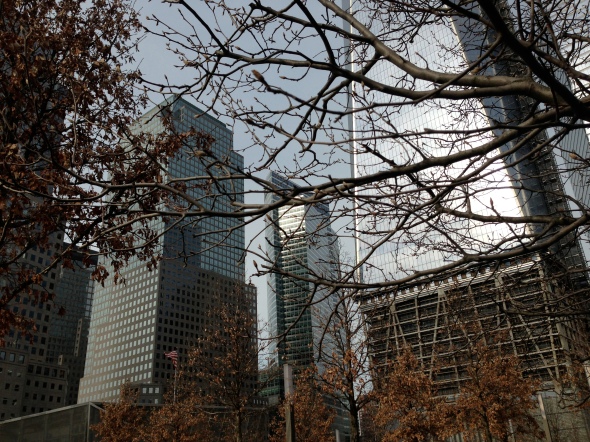 Like most of us, the Survivor Tree has faced hard times and has seen better days. Uprooted and damaged, yet showing signs of life.

As I left the memorial on that frigid day in February, I took one last look at the Survivor Tree and smiled as I noticed the tightly-closed buds forming on the branches. While it was still too cold and too early in the year for those buds to open and unfurl their renewal, they were there. Showing signs of life.

Leaving the memorial, the wind whipped in between the Financial District’s buildings. The sun dipped out of sight, and the temperature seemed to drop even lower. My feet hurt from my cross-town walk, and my face ached from being the only part of my body exposed to the cold. But my heart was warmed by the Survivor Tree, and by this random tourist in her chicken hat.

4 Comments on “Signs of life”