← Swaying palms
But did it really save her life? →

As if one case of breast cancer isn’t enough, how about two cases? 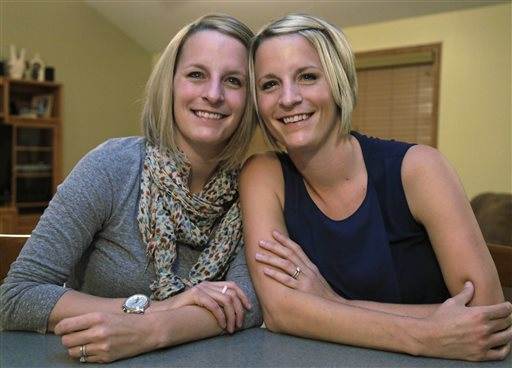 Identical twin sisters Kelly McCarthy and Kristen Maurer from Indiana share a lot of things — including breast cancer. The 34-year-old sisters saw first-hand how devastating cancer is when their mother died from colon cancer last year. Like so many struck by breast cancer, the sisters had no family history of the disease.

Apparently it’s not all that unusual, though, for identical twins to develop the same cancer, because they have the exact same genetic makeup. In addition, twins also have a mirror effect, with one twin getting cancer in one breast, and the other twin getting it in the other breast. McCarthy and Maurer were no different in this regard.

Their treatment was similarly influenced by each other: McCarthy was diagnosed first, with triple-negative breast cancer in her right breast, while 9 months pregnant. A week later, her baby was born, and shortly thereafter she started chemo & radiation, then had a mastectomy. Because of her sister’s diagnosis, Maurer got tested and found early-stage cancer in her left breast and had a bilateral mastectomy with tissue expanders and then implants.

McCarthy’s reconstruction was a bit different: instead of going the more common route of tissue expanders  to implant, she decided on a second mastectomy on the “unaffected” breast and flap reconstruction of both breasts. The problem was, she didn’t have enough fat & tissue to create two new breasts. I had a similar experience, sorta. Well, minus the identical twin sister, but sorta. I had extra fat before my DIEP reconstruction, aka The Big Dig, just not enough in my belly, the main harvesting site for DIEP surgery. Instead of having a twin sister donate her excess fat, I had to gain weight so that there would be enough excess in my belly. I went on the All-Butter-Lots-of-Cheese-Bottomless-Beer-Mug diet and packed on 12 pounds. Sadly, not all of it went to my belly (the rest I happen to be sitting upon as I type).

The worst part of the forced weight gain? No, it’s not the leftover junk in my trunk or the persistent craving for beer. It was the “Grab the Fat” game I had to play, more than once, with my plastic surgeons to determine whether my fat was fatty enough. Egads, I’d almost forgotten about the “Grab the Fat” game. I wrote about in this post,

“I thought I’d plumbed the depths of humiliation with the ‘grab the fat’ game we played more than once in preparation for reconstruction. In this game, the doc asked me to drop my drawers so he could grab my belly fat and determine if it was plump enough and plentiful enough to construct a new set of knockers. In a modified game of Twister, he had me sit, stand, and lean over to see just how much fat I had around my middle. Not once, but twice.

Humiliating doesn’t quite cover it.

But today, it was total humiliation, all humiliation all the time. I was basically splayed out like a deboned chicken on the exam table while he searched and plotted. Ladies and gents, just imagine your least favorite body parts being put under the microscope so to speak. Just consider for a moment being asked to stand up, sit down, and contort your body in the absolute least-flattering ways so that the softest, flabbiest, most-despised parts of your body are on full display. And then have those parts analyzed and calculated to determine just how fatty they are. We go to such lengths to de-emphasize these body parts, yet mine were being trotted out like the prize-winning hog at the state fair.”

McCarthy was fortunate enough to skip the “Grab the Fat” portion of the DIEP journey, but her sister probably endured it, because she donated her belly fat & tissue so that her twin could get reconstruction via DIEP surgery.  Maurer underwent abdominal surgery — not a tummy tuck, people, because there’s no free lunch in breast cancer  — to harvest the goods for her sister’s other breast.

How awesome is that??

Like most twins, McCarthy and Maurer share a close bond. But now, McCarthy said, “I feel closer. Her tissue is over my heart.”