Breaking news: a woman at my gym just told me about a CURE for CANCER.

It’s the news we’ve all been waiting for! The War on Cancer, launched by President Richard Nixon in 1971, is over!

I can’t believe this earth-shattering news hasn’t hit the airwaves yet. None of the major news organizations have broken the story yet.

Well, I suppose she’s just ahead of the curve. She must be a genius to know of this CURE for CANCER well before anyone else.

Here’s how it went down: This woman, whom I’ve never laid eyes on before, was chatting with an acquaintance of mine. We’re “gym friends” — we see each other at the gym and exchange pleasantries. She may know my name, but only because she hears the trainer yelling it when he wants me to quit chatting and get to work. I don’t know her name, nor do I know the name of the woman who knows the CURE for CANCER.

For simplicity’s sake, I’m going to call my acquaintance Francesca (because I’ve always liked that name), and I”ll call the woman who knows about the CURE for CANCER Koo-Koo Bird.

Francesca and Koo-Koo Bird were talking while on the AMT, my favorite cardio machine, when I climbed on next to Francesca; Koo-Koo Bird was on the machine against the wall. Francesca asked me how my newly repaired knee is healing (badly and slowly and painfully) and how my rehab is going (much the same). In the course of our chitty-chat she asked how long ago it was that I was diagnosed with cancer. Koo-Koo Bird’s ears perked up at the mention of cancer–likely because she was eager to tell me that she knows of the CURE for CANCER.

Koo-Koo Bird, who has a very thick Indian accent and a very soft voice, didn’t even bother asking my name before asking me pertinent details about my cancer diagnosis. I’ve never been one to shy away from answering direct questions, so I gave her the deets. She nearly fell off the AMT in her haste to tell me, in her heavily accented and soft voice, about the CURE for CANCER.

I still had a mile and a half to go on the AMT, so I was rather a captive audience and I listened to Koo-Koo Bird describe the magical powers of soursoap.

Francesca was all ears and asked Koo-Koo Bird to spell it. Koo-Koo BIrd wasn’t sure how to spell it, but said that her sister-in-law, who was diagnosed with breast cancer, chose to use it instead of chemo after her bilateral mastectomy two years ago and bam! her cancer is gone!

Well. That is interesting. Could it be, I asked Koo-Koo Bird, that the mastectomy rid her sister-in-law of the cancer, rather than the soursoap?

No, no, no, Koo-Koo Bird assured me. It was the soursoap that CURED her sister-in-law’s CANCER. It works, she said, very softly. It really works.

Francesca asked Koo-Koo Bird again how to spell it, for she must have missed the press releases and news stories about this miracle drug. Koo-Koo Bird said oh, it’s not a drug…it’s a fruit. 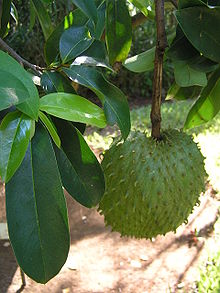 Well, why didn’t you say so, Koo-Koo? A fruit that can CURE CANCER. That makes perfect sense.

Francesca whipped out her iPhone right then and there, mid-stride on the AMT, to google the wonder fruit. She couldn’t find a darn thing about the magical powers of a fruit to CURE CANCER; probably because Koo-Koo Bird didn’t know how to spell it.

No matter, because Koo-Koo Bird told us everything we need to know about it. Except how to spell it. It’s grown in Central and South America as well as some Asian countries. It’s related to the paw paw and the cherimoya, the latter of which I know about because I’ve seen it on “Chopped.” When cherimoya is one of the mystery-basket ingredients, the contestants either start sweating because they know that the seeds are poisonous, or they risk being chopped because they don’t know that the seeds are poisonous. Not wanting to interrupt, I did not share that little tidbit with Koo-Koo Bird.

Koo-Koo Bird spent a lot of time telling me how soursoap is better than chemo and how it changed her sister-in-law’s life. Her sister-in-law apparently was at death’s door with breast cancer, until she started eating and juicing the soursoap that was delivered to her via FedEx fresh off a tree in some unknown tropical locale. Francesca asked if the wonder fruit is available in a can, and Koo-Koo Bird said she doesn’t know, but even if it does, you shouldn’t eat or drink anything that comes from a can because canned goods can CAUSE CANCER. Koo-Koo Bird then asked me if I ate a lot of canned foods before I was diagnosed. Before I could answer, she quickly and softly listed all the other CAUSES of CANCER: red meat, bottled water, and Tupperware among them.

How is it that with all the research I personally have done–which is a pittance compared to the amount the Hubs has done–I missed the data on soursoap? Koo-Koo Bird says it’s thousands times more powerful than chemo, and that it does not kill the non-cancerous cells, like chemo does. How did I not know that a high-alkaline diet is more effective than pharmaceuticals in fighting cancer? Koo-Koo Bird said that the role of alkalinity in diet was proven to be a CURE for CANCER before World War II and that the man who realized this was in the running for the Nobel Prize, but because he was a Jew he missed out on the prize and the credit for CURING CANCER.

Wait a minute, I said. Are you telling me that there’s been a CURE for CANCER all these years, but the world at large doesn’t know about it because of anti-Semitism?? Koo-Koo Bird turned quite serious and said yes.

Then she went on to tell me that soursoap could also cure anything from diarrhea to migraines to bed-wetting.

Koo-Koo Bird was quite adamant that I look into this wonder fruit that can CURE CANCER. I finished my sprint on the AMT and patted myself on the back for not telling Koo-Koo Bird exactly what I think of people who feel compelled to tout a CURE for CANCER. I smiled politely, told her it was nice to meet her, and ran like hell. Well, actually I hobbled like hell because my newly repaired knee does not and likely will not ever endorse running.

I did not tell Koo-Koo Bird that until she herself had cancer, she could never know how insulting and annoying it is to have some random stranger quiz you on what you did wrong to CAUSE your CANCER. I did not tell her that hearing her crack-pot nonsense touted as fact made me want to punch her in the brain. I did not mention that those of us who’ve endured a cancer diagnosis neither need nor appreciate unsolicited advice. I did not tell Koo-Koo Bird to pull her head out of her arse. I did not call her a tool.  I did not suggest that if there were a CURE for CANCER, we might have heard about it on the news or seen it online or read about it in a newspaper or magazine. I did not school Koo-Koo Bird on the fact that cancer is not one single disease, but a complex and multi-layered shitbox full of different diseases, and that even within one subgroup of cancer, like breast cancer, there are a million different combinations of factors and characteristics, so the idea of a CURE for CANCER is inherently misleading.

I thought about soursoap and Koo-Koo Bird for the rest of my workout. And when I got home, after peeling off my sopping-wet clothes and queing up the ice bags for yet another freezing session for my newly repaired knee, I took a little look-see into soursoap.

First thing I discovered is that it’s spelled soursop, not soursoap. I’ll have to tell Koo-Koo Bird next time I see her.

I’ll also have to tell her that while eating a varied diet and consuming foods like soursop that are high in vitamins B and C is a good idea in general, it’s not a panacea and it will not CURE CANCER.

Turns out that while soursop may have some overall health benefits, evidence of its cancer-curing properties having been tested on any actual humans is hard to find. In what may be a huge disappointment to Koo-Koo Bird, I didn’t spend much time researching it, so perhaps I missed the links to the clinical trials of soursop. In my limited research, I did find several references, such as one from Sloan-Kettering saying “human data are lacking” on soursop. There is plenty of data, however, showing that the fruit contains a heaping helping of annonacin, which has been shown in actual studies to lead to Parkinson’s when eaten in large amounts.

Well, I guess I’ll continue swallowing a Tamoxifen tablet every day for the next 3 years (minimum) and relying on CT-scans and MRIs instead of enjoying a bowl of soursop to CURE my CANCER.

Thanks for nothing, Koo-Koo Bird.