Posted: February 12, 2012 | Author: pinkunderbelly | Filed under: Uncategorized | Tags: Alex's Lemonade Stand, Barbie's measurements, Bratz dolls, pediatric cancer, The Rose Houston, True Hope dolls | 17 Comments
MGA Entertainment, maker of the controversial Bratz dolls, introduces its latest addition to the line at the Toy Fair in New York this week. Because the regular Bratz aren’t trashy and offensive enough, now MGA claims to be committed to and supportive of the fight against cancer by rolling out bald versions of the Bratz girls under the “True Hope” campaign.
Bratz girls before:

I thought the pinkwashing of products for breast cancer awareness was bad. Wait, I still do. But this takes the “charitable” marketing scheme to another level. At least the bald Bratz don’t look like hookers. Although the super-short plaid skirts, the over-the-knee socks, and the platform heels come close.

I don’t even know where to start. The blatant misspelling? The idea that being a brat is a good thing? The over-the-top tartiness of the original line of dolls? I’m not a fan of the original Bratz, so it’s no surprise that I’m not embracing the new line, either.

For those who are a fan of Bratz, whether the slutty version or the bald version, you may not get where I’m coming from. I will also allow for the possibility that a pediatric cancer patient may find comfort from a bald doll, albeit one that portrays a completely unattainable version of feminine beauty and one that might suggest to said child that heavy eye make-up is do-able during chemo. Bratz fans may find nothing wrong in the messages conveyed by the original Bratz gang to little girls, and perhaps will similarly find nothing wrong with bald Bratz dolls being sold under the guise of children’s cancer charities. But I have a problem with both.

Bratz dolls, IMHO, encourage impressionable little girls to focus on their image over all else. They introduce little girls to the idea of dressing like women, which is rife with problems and causes little girls grow up even faster. I’m not the only one with this opinion.

“When young girls have an open-ended toy—like a generic baby doll—it encourages creativity,” says Diane Levin, a professor in the early childhood education department at Wheelock College in Boston. “But the scenarios of Bratz dolls tells them how to play—to dress up, do your hair, go to fashion shows. The dolls encourage girls to think about themselves as sexualized objects whose power is equated with dressing provocatively.” While we women have come a long way, baby, in terms of equality, these dolls have the potential to reverse our course and send us back into the “mommies don’t go to college” mentality. If little girls get the message that they must be sexy to be valuable, we’re in real trouble.

The American Psychological Association did some research on this very issue and released its findings in the Report of the APA Task Force on the Sexualization of Girls. Girls are bombarded with images and messages that are not age-appropriate, which the APA Task Force says can have a negative impact on self-confidence, body image, self-esteem, sexual development, and mental health.

All that from a doll? You betcha.

Yet MGA’s CEO, Isaac Larian thinks otherwise. Shocking. He says that girls want Bratz because they are “beautiful,” and he denies the idea that there is anything sexual about the dolls. “I’m looking at a whole wall of them in my office, and I don’t see them wearing sexy clothes,” he says. 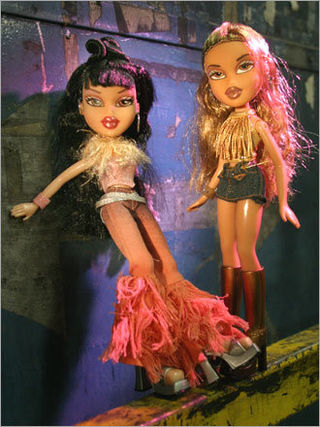 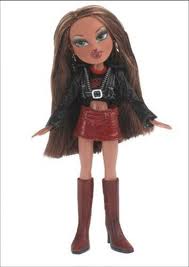 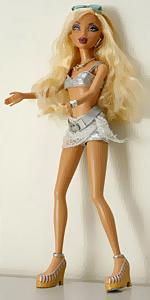 And from the Baby Bratz line:

Huh. Perhaps Larian needs to get his eyes checked. Or do a quick google images search, which is what I just did. Or perhaps his version of “sexy clothes” is different from mine. Since when are fishnet hose and over-the-knee boots part of the dress code for girls ages 4 to 8, which is the demographic targeted by Bratz? Since when are red lipstick, beauty marks, and adorned, itty-bitty panties cool for babies?

And what of the Bratz Web site, which promotes major superficiality and vapidness? While waiting for the transition from one screen to another, the message flashes “Please wait … it takes time to look this good.” Each doll’s “profile” used to include her “favorite body part” but that nifty little feature appears to have been axed.

More insanity from Larian, who says that “MGA’s mission is to provide joy and happiness to kids around the world. We believe children are our legacy and want them to be healthy, have confidence in their imagination and build their dreams into reality.” Like the reality of the body images of these dolls? And we thought Barbie’s proportions–estimated to be 39-21-33 and without enough body fat to menstruate, were totally whacked. At least Barbie preaches the message that girls can do anything they want to do, pursue a variety of careers, have financial and emotional independence from men, and become who they want to be rather than who society, or Isaac Larian, tells them they should be.

Larian says “We [MGA] have a responsibility to children and we take that responsibility very seriously.  The “True Hope” dolls are designed to support and comfort young girls and boys who so bravely endure cancer treatments.  MGA also wants to be an active supporter in the fight to develop lifesaving treatments for children.”

Maybe I’m splitting hairs, but it seems to me that if MGA really wanted to be an “active supporter” in pediatric cancer treatments and research, they’d donate more than the $1 from the sale of each doll, as currently planned. With a suggested retail price of $14.99 each, that $1 donation amounts to a pittance and reminds me of the pathetically paltry amount (an estimated 19 percent) of Susan G. Komen for the Cure’s proceeds that go toward breast cancer research. If you really want to make a difference, skip the dolls and send the $14.99 directly to a cancer charity. For pediatric cancer, I recommend St Jude or Alex’s Lemonade Stand. For breast cancer, you know I love The Rose, located right here in Houston. If you’re not sure which cause to donate to, check out Charity Navigator.

Maybe I’ve got it all wrong and the True Hope dolls will become a major tool in the battle against cancer. Maybe they will be the linchpin on which cancer research hangs. Maybe I’m cynical from the deluge of pink products purported to help eradicate the disease that kills more than 40,000 women in this country alone every year.  It’s estimated that more than 12,000 kids younger than 15 are diagnosed with a childhood cancer in the United States each year. I’d love to know how many of those sweet babies would want a True Hope doll.