Yesterday I turned 45. I’m on the far side of middle-aged and am four years into life after cancer. Whatever that means. I suppose I don’t have any idea what life after cancer means, other than the fact that nothing is ever the same afterward. In honor of growing another year older, I decided to read a “young adult” book, to see if I still knew what is young, hip, and/or cool. I had read several glowing reviews of The Fault in Our Stars by John Green. Despite those glowing reviews, I initially resisted reading this book, because I didn’t want to read a book about teenagers with cancer.

But that’s the thing about The Fault in Our Stars. It’s not about kids with cancer. The main characters, Hazel and Gus, have cancer, but the book is about so much more than their respective diseases.

I wondered how Green could write so convincingly and wrenchingly about the role that cancer does play in the book, if he had not been touched by disease himself. So I read an interview with him and learned that he worked as a chaplain in a children’s hospital and met lots of sick kids. In that interview he said, “When I was at the hospital, I met all of these young people who, yes, they were sick, but they were also many other things. They were funny and angry and sad, and they had all of the emotions that any other human has, all the desire, all the wishes. And that was what really resonated with me.”

That resonates with me, too, because it’s true. People who have had or currently do have cancer certainly have the same emotions, desires, and wishes as any other human. However, those emotions are often sent into overdrive, as we must confront things we aren’t prepared for or would rather not face.

Those desires are often perilous because of the uncertainty of our fate. As Gus so eloquently expresses it, “Almost everyone is obsessed with leaving a mark upon the world. Bequeathing a legacy. Outlasting death. We all want to be remembered. That’s what bothers me most, is being another unremembered casualty in the ancient and inglorious war against disease.”

“I think cancer in many ways to those of us alive today is similar to what tuberculosis was like in the 19th century. It’s so unfair: It takes the young, it takes the old. Sometimes you live, sometimes you die. And it’s very difficult to make sense of the reasons why it may go one way or another. It’s very, very difficult to imagine it as anything other than just cruel and cold and capricious. And that makes it difficult to imagine the universe as anything other than cold and capricious. And I wanted to be honest about that, because I wanted them to have to face, in the most desperate way, that overwhelming question, as T.S. Eliot called it, of how we’re going to organize our lives and what they’re going to mean.”

Hazel and Gus confront the capriciousness of whichGreen speaks. Gus talks about receiving an 85 percent chance of surviving his cancer: “I know those are great odds, but I kept thinking it was a game of Russian roulette. I was going to have to go through hell for six months or a year and then at the end, it still might not work.” Hazel points out that being her situation was completely different: as a Stage IV cancer patient, her “final chapter was written upon diagnosis. Gus, like most cancer survivors, lived with uncertainty.”  I had never before considered that a Stage IV patient might view herself as having a more certain future.

Hazel describes a scene that was very familiar to me during the multiple hospitalizations I had from the post-mastectomy infection: “The first thing they do is ask you to rate your pain on a scale of one to ten. I’ve been asked this question hundreds of times over the years and remember once early on when I couldn’t get my breath and it felt like my chest was on fire, flames licking the inside of my ribs fighting for a way to burn out of my body. A nurse asked me about the pain and I couldn’t even speak so I held up nine fingers. Later, after they’d given me something [for the pain], the nurse said, ‘You know how I know you’re a fighter? You called a ten a nine.’ But that wasn’t quite right. I called it a nine because I was saving my ten.”

Another quote that really resonated with me is this:

“Pain is like fabric; the thicker it is, the more it’s worth.”

While that is true, it’s also true that the more it’s worth, the more it costs. That’s why I’m saving my ten. 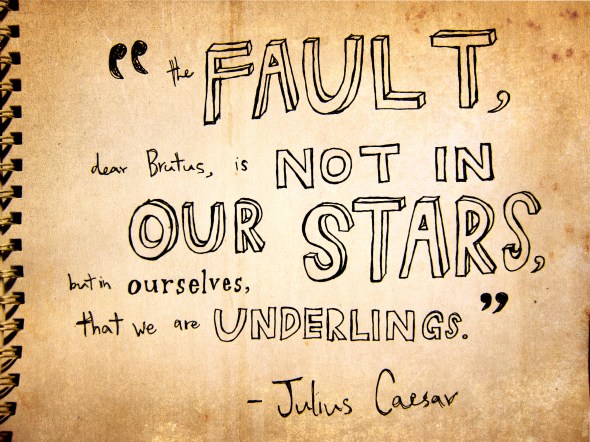