I’m a big fan of Sendak, always have been. Long before I became a parent, I had an affinity for children’s books. Years in advance of adding a crib, glider rocker, and Diaper Genie to my decor, I had an extensive library of children’s books. Even if I’d never had kids, I’d still have kid books. One of my most prized possessions is a set of four teeny, tiny books by Sendak. “The Nutshell Library” was published nearly a decade before I was born, but the stories are timeless. Alligators All Around, Chicken Soup With Rice, One Was Johnny, and Pierre A Cautionary Tale in Five Chapters and a Prologue may be tiny, but these stories pack a punch. I am physically unable to serve chicken soup without hearing Carole King’s song version of Sendak’s story in my head. “Sipping once, sipping twice….”

Sendak’s characters have been described as bossy, headstrong, and borderline obnoxious. Perhaps that’s why I like them so. In Pierre, the title character is a stubborn boy whose stock reply to everything is “I don’t care.”

Pierre learns to care, albeit the hard way, when a hungry lion enters the scene and tells Pierre that he will eat him up. When Pierre replies with his usual “I don’t care” the lion follows through on his threat. 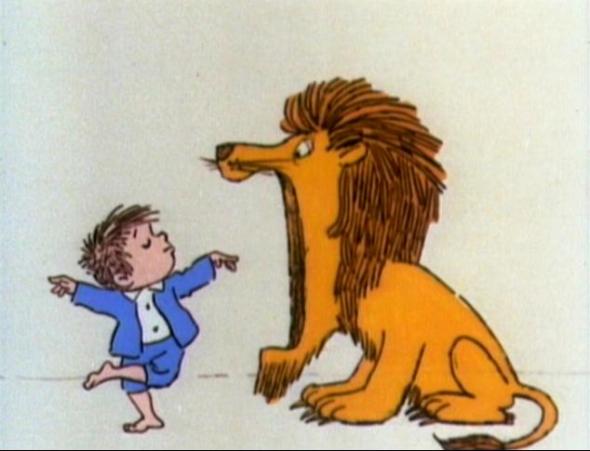 Some may consider this harsh for a kids’ book, but it’s a great lesson in (a) caring; (b) following through; and (c) karma. All important life lessons, in my opinion. The consequences to Pierre’s bad attitude are also foretold in the opening paragraph of the book:

“There Once was a boy named Pierre,

Who only would say, “I don’t Care”

Read his story my friend,

And you’ll find at the end,

That a suitable moral lies there.”

When my kids were tiny, there was a Little Bear cartoon that was a favorite in our house. I’ll never forget the day that Payton was at preschool and I turned Little Bear on anyway, because it was such a mainstay of our everyday routine. The books are another series with which I will never part. Perhaps one day I will pass them on to some special little children in my life. Perhaps. No promises.

Similarly, I cherish my copy of In the Night Kitchen. Not because it’s as special to me as Pierre and Little Bear; frankly, the story never grabbed me like the others did. It’s precious to me, though, because of the controversy surrounding main character Mickey’s nudity. Librarians were known to draw a tiny diaper on little Mickey’s bum to cover his nudie-bits. The book was subsequently banned and roundly criticized, which of course made it all the more appealing to me. Betcha the closed-minded book-banners would really get riled up if they knew that Mr Sendak lived an alternative lifestyle. Not that it’s anyone’s business. Long live Mickey and the Night Kitchen. “Stir it! Scrape it! Make it! Bake it!”

Sendak is of course best known for Where the Wild Things Are, the book that defined his career and blew the doors off the genre. No longer would “See Dick run” suffice as prose for the wee set. Published in 1963, Wild Things set Sendak’s career ablaze and upped the ante for anyone who wanted to succeed as a children’s book author. Although he claimed he was not a children’s author; he wrote stories “about human emotion and life,” as he told People magazine in a 2003 interview.“They’re pigeonholed as children’s books but the best ones aren’t — they’re just books,” he said. That’s what I’ve always loved about them. They’re just books. Some children’s books have much more complex storylines and deeper character development than many bestselling grown-up books (Twilight and 50 Shades, this means you). 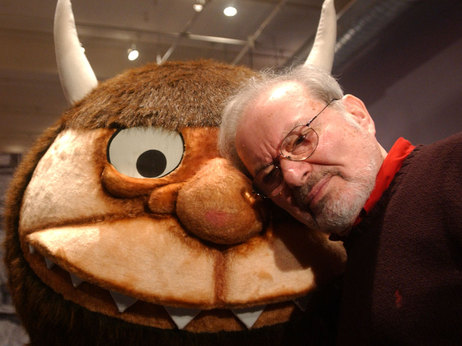 The genre of children’s books would never be the same after Wild Things. Gone was the puffy-cloud, happy-endings arena, and Wild Things depicted a defiant child, Max, in a scary place populated by giant monsters with big teeth (“And the wild things roared their terrible roars and gnashed their terrible teeth and rolled their terrible eyes and showed their terrible claws.”). In 2006, Sendak told NPR: “The idea of an American children’s book where the child is not perfectly safe was something that was new. I didn’t know it was new, I didn’t set out to break any new ideas. I was just doing what was only in my head.” Sendak reportedly modeled the monsters after his relatives — “who, in his memory at least, had hovered like a pack of middle-aged gargoyles above the childhood sickbed to which he was often confined,” per The New York Times. Somehow I’m picturing Sendak yelling “How ya like me now?” to those relatives.

Sendak’s illustrations are as stunning as his prose is riveting. What’s most amazing to me is that he was largely self-taught, which lends credence to the idea in my head that people who are great at something don’t become great by rote. It’s just there, it’s in them. Greatness is cultivated, refined, and harnessed, but it’s there. That greatness transfers seamlessly onto page after page of Sendak’s words and drawings. He defined generations of childhoods with his signature style: crosshatching, larger-than-life characters, not-always-happy endings. Countless kids learned to love the power of a good story after reading Sendak. The author received heaps of mail from kids, writing on their own or as part of a class project. In a NYT interview, Sendak told of one letter from an 8-year-old boy that stood out in his mind: “Dear Mr. Sendak,How much does it cost to get to where the wild things are? If it is not expensive, my sister and I would like to spend the summer there.”

Me too. I’d love to go to where the wild things are and, like Max, declare that it’s time to

I’m such a fan of wild rumpus.
I’m not such a fan of a world without Maurice Sendak. While his work will live on, I will miss his style, his message, his attitude. It’s a crying shame to think that there will never be a new Sendak character. No new Max or Mickey. No Jennie the terrier. No more Kenny or Really Rosie.
It seems appropriate to close with a quote by Maurice Sendak himself, who said “I cry a lot because I miss people. They die and I can’t stop them. They leave me and I love them more.”  I miss you, Maurice. RIP.

I love me some William Butler Yeats, and what better day than St Paddy’s Day to read a little verse by Ireland’s best? If you’re not familiar with Mr Yeats, today is your lucky day. Keep reading; below are my two all-time favorite poems of his. I love, love, love them both. If you don’t have any Yeats in your collection, click here and order some today. I know, I’m bossy but really it’s for your own good and you will probably thank me later.

But first, a little background info: Yeats was born June 13, 1865 (a fellow Gemini, and likely half-crazy like the rest of us twins). His dad was a painter, and Yeats was schooled in art but much preferred poetry, and broke with family tradition to pursue his craft. I’m glad he did.

He was quite a handsome guy, but wasn’t especially lucky in love. While hard to live that way, I suppose it provided much fodder for his written word. This is my favorite photo of him because of the messy hair and trendy glasses; he could totally pull that look off today, as we speak. I’m not so sure about the Colonel Sanders suit, though. That’s taking it a bit far.

I’m not much of a romantic, and am not very sentimental either (but not quite cold and heartless), but the sweetness of “When You Are Old” gets me every time. I suspect he wrote it about his true love, Maude Gonne (who, by the way, was not his wife; he asked several times but she refused, and they both married other people). The theme of unrequited love is there, among the deep shadows of her eyes and her “changing face.” Now that I too am an old lady with under-eye shadows and a changing (i.e., not so youthful) face, the message of this poem is even more powerful.

The first time I read “The Stolen Child,” I had to sit down and take it all in. It still has that effect on me. I’m already sitting, so I’m good now, but it does move me. I didn’t have kids at the time, was a carefree college girl, and motherhood seemed a very distant destination on that particular world tour. Now that motherhood is my permanent stop, the imagery of the child being lured away “to the waters and the wild, with a faery hand in hand” seems scary and cruel, yet still magical and tempting in its prose. It reminds me a bit of the

children’s classic Where the Wild Things Are, by Maurice Sendak, whose brilliance is not something I can do justice to in this space, so I will defer (for now). Again, if you’re not familiar with Where the Wild Things Are, click here and order it today.  And so before I get sidetracked and start rambling about how much I love all things Sendak, “Let the wild rumpus start!”

WHEN YOU ARE OLD
When you are old and grey and full of sleep,
And nodding by the fire, take down this book,
And slowly read, and dream of the soft look
Your eyes had once, and of their shadows deep;

How many loved your moments of glad grace,
And loved your beauty with love false or true,
But one man loved the pilgrim soul in you,
And loved the sorrows of your changing face;

And bending down beside the glowing bars,
Murmur, a little sadly, how Love fled
And paced upon the mountains overhead
And hid his face amid a crowd of stars.

THE STOLEN CHILD
Where dips the rocky highland
Of Sleuth Wood in the lake,
There lies a leafy island
Where flapping herons wake
The drowsy water-rats;
There we’ve hid our faery vats,
Full of berries
And of reddest stolen cherries.
Come away, O human child!
To the waters and the wild
With a faery, hand in hand,
For the world’s more full of weeping than you
can understand.

Where the wave of moonlight glosses
The dim grey sands with light,
Far off by furthest Rosses
We foot it all the night,
Weaving olden dances,
Mingling hands and mingling glances
Till the moon has taken flight;
To and fro we leap
And chase the frothy bubbles,
While the world is full of troubles
And is anxious in its sleep.
Come away, O human child!
To the waters and the wild
With a faery, hand in hand,
For the world’s more full of weeping than you
can understand.

Where the wandering water gushes
From the hills above Glen-Car,.
In pools among the rushes
That scarce could bathe a star,
We seek for slumbering trout
And whispering in their ears
Give them unquiet dreams;
Leaning softly out
From ferns that drop their tears
Over the young streams.
Come away, O human child!
To to waters and the wild
With a faery, hand in hand,
For to world’s more full of weeping than you
can understand.

Away with us he’s going,
The solemn-eyed:
He’ll hear no more the lowing
Of the calves on the warm hillside
Or the kettle on the hob
Sing peace into his breast,
Or see the brown mice bob
Round and round the oatmeal-chest.
For be comes, the human child,
To the waters and the wild
With a faery, hand in hand,
from a world more full of weeping than you.