Take your “policy” and shove it; Fish will walk!

The story of Austin Fisher is making the rounds, and I’m determined to do my part to keep it going. It’s especially appropriate today of all days, as it’s my sweet mama’s birthday. There’s nothing I’d rather be doing than wrapping a gift and making a coconut cream pie for her. Happy Birthday, Mom. I sure do miss you.

He certainly deserves to walk across the stage in Carrollton, Ohio, next month with the rest of his senior class and receive his hard-earned diploma. 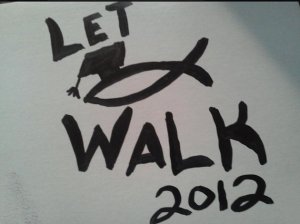 Austin’s mama, Teri, has metastatic breast cancer, which she’s been fighting for 7 years. That’s almost half of Austin’s life. Her one goal in her cancer battle was to survive long enough to see her son graduate high school. That goal was nearly compromised by a stupid policy and a dogmatic bureaucracy. Carrollton High School principals told the varsity baseball player that he could neither walk at commencement nor attend the senior class trip nor go to the prom.

Nope. Austin wasn’t going to walk or go on the trip or go to prom because he had 16 unexcused absences from school. Before this school year, Austin had perfect attendance.

Why was he absent? Not because he was cutting class or ditching school. He was caring for his mom while she was being pummeled by breast cancer. Teri Fisher says that her son is “her hero, her rock” and that with no adult male in the household, the role of caregiver was valiantly taken on by Austin. He willingly sacrificed to care for her, saying that school took a backseat to doing the day-in-day-out, hard work of primary caregiver.  “You never know how much time you have left and that was one of her big [goals]–to see me walk and get my diploma and go off to college,” Austin says.  “I wouldn’t change it, everything I did. Family first.”

I’m blown away by the depth of character of this young man. What a stellar example of priorities, commitment, and loyalty. We could all take note.

Austin’s aunt wrote a letter to the local newspaper once the story broke, to shed a little more personal light on the Fishers’s situation:

“A single mom juggling medical bills with the usual expenses of living, fighting a foreclosure, working her job, traveling to Canton for chemotherapy — no easy task. Throughout all of this, Austin continued to attend school as he could while caring for her, working two jobs, and participating in varsity sports.”

When Austin learned in January that he would not be able to participate in the much-anticipated rites of seniors such as commencement and prom, he and his mom went straight to see Principal Dave Davis but was told that “rules are rules” and “it’s policy” to deny these things based on the number of unexcused absences.

Thanks to the power of the people and the sweeping reform accomplished by social media, Superintendent Palmer Fogler reversed the decision yesterday, and Austin will get to walk, and Teri will achieve her goal of seeing her boy graduate.

The Facebook group “Let Fish Walk” played a part in the reversal, I would think. The group grew quickly, from a respectable 10,000 yesterday to some 32,000 members and counting today. A petition through change.org also helped, with some 100,000 signatures. FYI, the population of Carrollton is 3,211.

I’m thrilled for Teri and Austin. Kudos to the Carrollton school board for making the right decision, and to the world at large for being decent and giving a hoot about one family’s plight. Cancer sucks. It devastates families and wreaks untold havoc. But once in a while, something good and heartwarming comes from the vicious disease that steals so much from so many. Today that something is Austin Fisher and his mama Teri. As I remember my own sweet mama today, I’m crushed by her absence in my life and the fact that yet another birthday of hers comes and goes without her. She would have been 74 years old today. I wonder how much she would have changed had she been here the last 7 years: would she have finally stopped dying her hair blonde and let it go white, as she spoke of wanting to do? Would she be a little hunched-over and frail, or still the busybody, energetic dynamo we all knew and loved? One thing is for sure: she would be spoiling my children and fussing at me to leave them be, let them play, give them more treats. Another thing is for sure: the hole in my heart that will forever remain because of cancer.  I do hope that Austin Fisher never has such a hole in his heart.