At the risk of appearing to be more than a little bit pie-obsessed, I give you this: 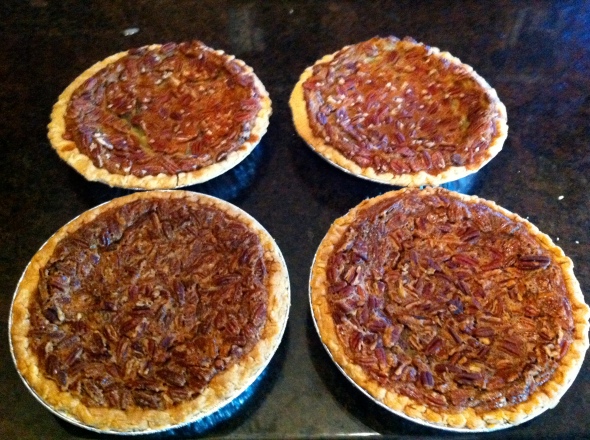 It’s Pie Day at the middle school, a tradition in which parents send pies for the teachers the Friday before Thanksgiving . It’s a small but sweet way of showing our thanks to the teachers for everything they do for our kids. Thanks to my get-‘er-done friend Amy Pace, I’m now a proud contributor to Pie Day. Two of these beauties are going to school, and the other two are going to friends: one who is recovering from surgery, and one who makes me hit it hard at the gym. There is something deliciously ironic about taking a homemade Derby pie–chock full of sugar, butter, eggs, nuts, chocolate chips and whisky–to my trainer at the gym.

As I might have mentioned before, I love pie. I don’t eat it nearly as often as I should considering the flood of good memories it gives me of my mom and her superstar pie-baking skills. I’m happy to pass that good feeling on to my friends and my kid’s teachers today. Pie for everyone!

A day of deliveries

I thought about titling this Deliverance, as in the iconic 1972 movie. Like the movie, this week has been fraught with a “grueling psychological and physical journey” as I once again maneuver the rapids of this cancer “journey.” Ok, this week hasn’t been so fraught with the physical journey, as the most taxing part of it has entailed sitting in doctors’ waiting rooms for hours on ends. Not exactly a physical trial, but what it has lacked in the physical hardships, it’s made up for in the psychological difficulties.

If you haven’t seen the movie Deliverance, consider this a tip: it’s not pleasant to watch. Yes, it has Jon Voight and Burt Reynolds, but it’s also got some inbred locals and some nasty mountain men. The term “squeal like a pig” will never seem the same after one particular scene in Deliverance. The “Dueling Banjos” may well be forever lodged in your brain as well. Good luck getting that “song” unstuck from your head.

In the movie, the city slickers take a canoe trip down a river in a remote part of Georgia. They want to travel an uncharted section of the river before a dam project forever changes the river’s course. Initially, the trip is thrilling and chock-full of natural beauty, but things take a decidedly ugly turn as the foursome gets separated and the river becomes rougher. Eventually, the men are face-to-face with the reality of survival as they struggle to prevail over nature and win back the ability to exist in a civilized manner.

Going toe-to-toe with the worst that nature dishes out is an epic journey, much like the cancer “journey.” Cancer has dished out some nastiness, and my body has struggled mightily in an effort to right the listing ship and get back to “normal.” This week has been far off of normal as I’ve encountered some trouble in getting to the next surgery, the oophorectomy. The surgery has always been in the plan, it was just a matter of when to do it. The time is upon me, but the OB-GYN I met with Monday left me with more questions than answers in what should be a settled matter. In addition to being hell-bent on reiterating the risks and espousing the wide-ranging unpleasantries of surgical menopause on a “young” woman such as myself, she introduced a new fly in the ointment by decreeing that a laparoscopic oophrectomy was not an option for me because of the existing abdominal scar from The Big Dig.

Cue the confusion and emotional scrabbling that occurs when a doctor brings up an issue I’m neither prepared for nor expecting.  Just as I’m wrapping my head around the new idea of open surgery and all its risks and recovery issues, everything changes. Now I feel compelled to get another opinion on whether this surgery can indeed be done laparoscopically. And that’s what I’m going to do.

So as much as I hate the idea of getting yet another doctor involved, and as much as it pains me to realize that this “journey” is yet again complicated by things beyond my control, I pulled my battered self up by the proverbial bootstraps and made the appointment. And I will endure more hours waiting for another doc to weigh in on my disheartening situation. Getting on the phone and scheduling an appointment doesn’t seem like that big of a deal, but when you’re confused, emotionally drained, and frankly, pissed off at the world, it is a big deal. It also means rehashing–again–my long, complicated history with breast cancer and infection, which truly is something I’d like to just forget, put behind me, and move on down the road. Where is that damned magic wand, anyway??

All this bitchin’ and moanin’ leads me to the reason for this post: the day of deliveries. Just when I was at my wit’s end and was beyond ready to give up and declare myself the loser in this epic battle, I hear the rumbling of the FedEx truck coming down my street and stopping at my house. Imagine my utter delight when a box appears on my front doorstep. 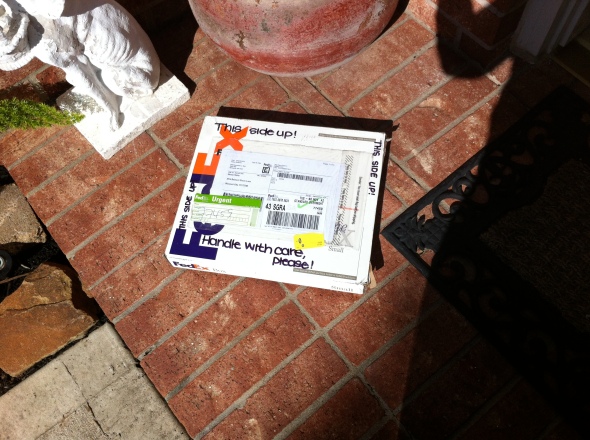 I get a monthly delivery from my oncologist’s to-your-door pharmacist, but this is way better. 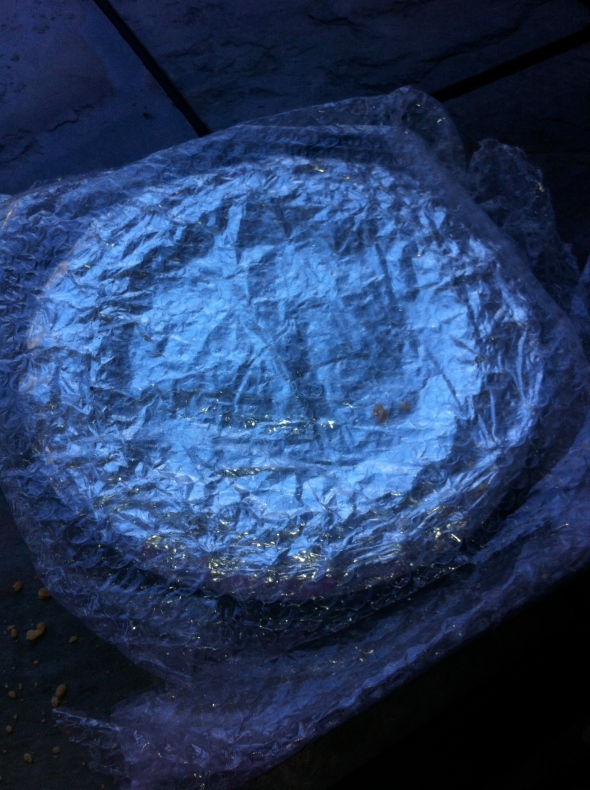 This delivery smells good, feels nice and weighty, and has a delicate crumb sneaking out of the wrapping. 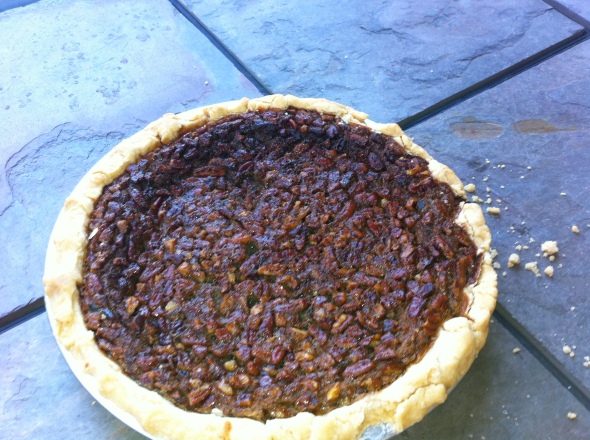 A homemade pie that’s magically appeared on my doorstep.

Just when I needed the boost that comes from a decadent treat, there it is.

I didn’t even think about waiting until after dinner to dig in. 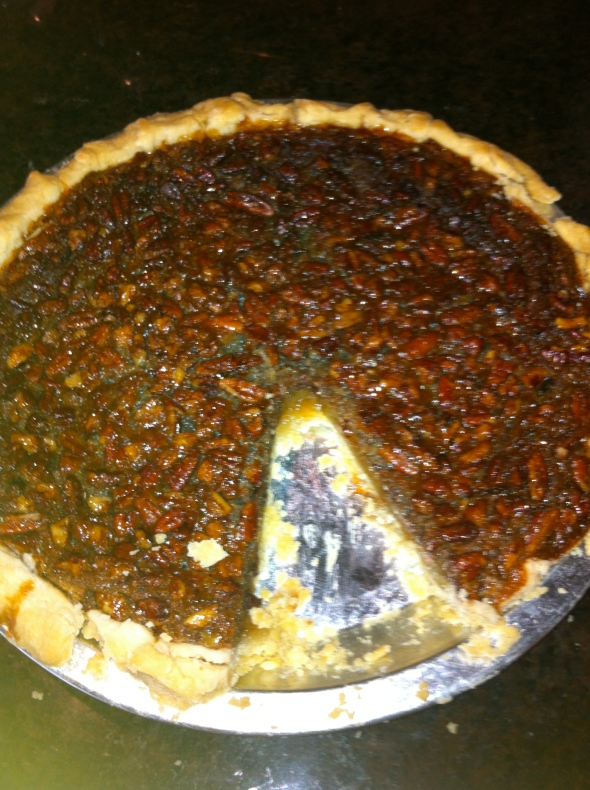 I cut that pie and scarfed down a big ol’ piece without thinking twice.  I couldn’t care less about the calorie content or the ungodly amount of sugar contained in that piece. Instead, I enjoyed every minute of it. Derby pie, which is pecan pie on steroids, is something that would normally be a very occasional treat; in fact, it’s been more than a decade since I’ve had a piece. But the flaky, buttery crust and the nutty, caramely, filling with the sinful addition of chocolate chips and whiskey could not have come at a better time. How great is that to have a delicious pie that’s not only sweet and gooey and nutty and chocolatey but also boozy? Heaven on Earth. Finally, something worth smiling about! And what a wonderful coincidence that I’m eating delicious homemade pie mere days after I guest-blogged about … drumroll, please … homemade pie on my friend Marie’s blog. Marie is going through a terribly rough time right now, and her blog friends banded together to stand in the gap for her while she tends to the awfulness that is a dying parent (Huge kudos to Lauren for being the mastermind behind this lovely gesture). I was beyond honored to help, and thought pie a fitting subject to distract us from the gravity of her situation. I’m going to go out on a limb here and declare pie a temporary panacea to the emotional trials, large and small, that plague us.

As if my full belly and sugar-high weren’t enough, I soon heard the rumble of another delivery truck at my house and could hardly believe my fortune at getting another surprise delivery. Two in one day? Fantastic!

This one wasn’t food, but flowers! 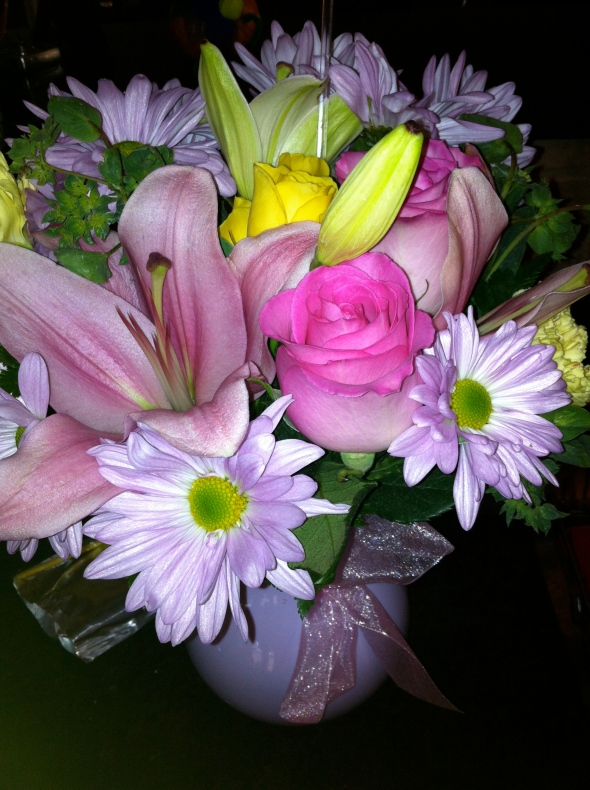 Oh, how I love fresh flowers. There’s something so cheery about the pinks, yellows, and greens all working together to present a beautiful palette. I just adore the way the individual flowers nestle against one another to comprise a unit. They’re separate but when combined with others, they become cohesive. And the fact that their lifespan is fleeting makes me cherish them all the more — enjoy them while they’re here. Another decadent indulgence that makes me smile. Many thanks to my pie-shipping friend in Minnesota, and to my in-laws in Kentucky for turning around a rotten week. Three days in, I was ready to chuck this week and start over, but no more.

Finally! Something wonderful comes my way.