A good deed that’s not so good

On my way home from carpool #1 this morning, I was driving down my street, minding my own business, when I saw a tiny white dog running full-speed down the sidewalk. With no humans in sight, I figured this little dog had escaped. I pulled over to get a better look at the dog and to see if he had a collar and tags. He had both, so I got out of the car and called him over. He came right away and was quite friendly, and his tiny body was shivering from the 43-degree morning chill.

I called the number on his name tag, after learning his name is Maxwell Chambers, and got a busy signal. With an eye on the clock and carpool #2 in mind, I put Maxwell Chambers in my car and took him to my house. 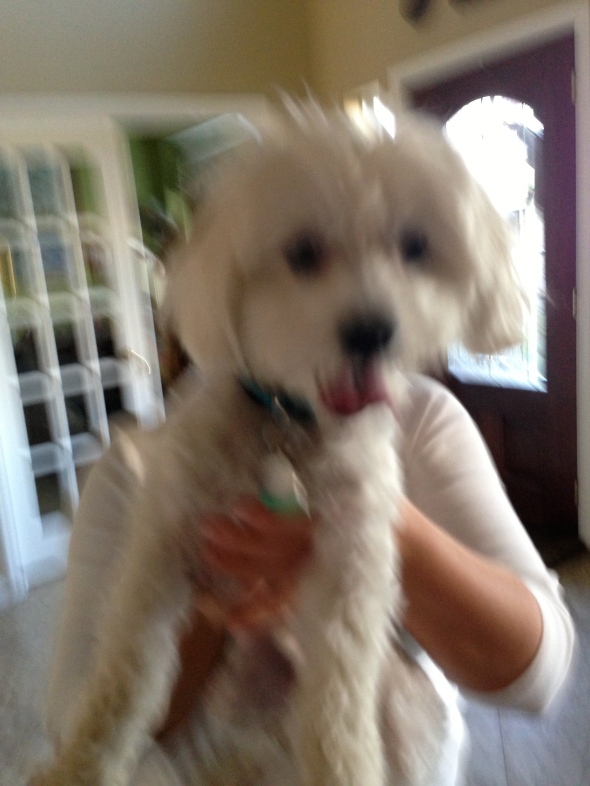 He’s a friendly little guy, and was happy to drain the water bowl I set out for him. I tried his owner’s phone number a dozen more times, each time getting a busy signal. Just as Pedey the Weasel Dog was getting upset about our visitor, and just as our queen-bee piggie was considering whether this littler furball was edible, inspiration struck and I called the vet listed on Maxwell Chambers’s rabies tag.

The vet said that yes indeed Maxwell Chambers was a client of theirs, and she gave me another phone number to try for his owner. I told her that my animals were about to riot and rather than keep Maxwell Chambers while I tracked down his owner, I’d just bring him to the vet and let the owner pick him up there.

Maxwell Chambers was happy to play in my bathroom while I got ready to get out the door.

Clearly he’s used to being indoors. He made himself quite comfortable on the bathroom rug and tunnelled under the wet towel a certain girl left on the bathroom floor this morning.

Maxwell Chambers enjoyed co-piloting carpool #2 and was a good passenger.

He was a good passenger briefly.

After my #1 son got out of the car, Maxwell hopped into my lap, and before long, he barfed all down my shoulder, covering my seatbelt, spraying the inside of the door, and drenching the carpet in the backseat.

There wasn’t a good place to pull over for a while, so I could feel the undigested kibble he had for breakfast seeping through my sweater. The smell was less than pleasant. I scooped out as much as I could into the street as soon I pulled over, exhausting my glove-box supply of napkins and dousing myself in hand sanitizer.

When we got to the vet, I handed Maxwell Chambers over and big him adieu. I was tempted to tell the vet tech to have Mr Chambers’s owner call me to discuss the car-cleaning bill, but I did not.

I sped home and employed every cleaning technique I could: first sucking up the remaining chunks with the shop vac, then using the Shark hand-vac to get the gunk in the crevices where the driver’s seat moves back and forth on the little track. Who knew there were so many nooks & crannies in which bits of doggie barf could land? I sanitized the door, seatbelt, seat, and carpet as best I could with Lysol wipes, then finished it off with a coat of Meyers Clean Day lavender all-purpose spray to get the smell out. The final step was to Windex the windows and leave the car wide open in the garage to air out.

Perhaps no good deed goes unpunished, but this is ridiculous.