Let me just say first and foremost, I harbor no ill will toward Robin Roberts. None. She seems like a smart, funny, and together woman who would be a lot of fun to have a drink with. I loved how open and honest she’s been about her cancer “journey” and about how upsetting the death of her mother was for her. I agree with her completely on both of these weighty issues, and I’m grateful that she didn’t put the positive pink-ribbon spin on her cancer experience.

I’m glad she’s doing so well, and I’m glad she’s back at work. I’m not a morning TV watcher, despite several of my besties who swear by The Today Show and who look at me funny when I say I never, I mean never watch TV in the morning. Nothing against the talking heads or the people who love them, but it’s too chaotic for me. As I’m swilling coffee, appeasing a hungry little piggie, cajoling kids out of their cozy beds, making breakfast, and packing lunches, I like quiet. That’s just me.

But back to Robin Roberts. In the magazine article, she’s candid about how harrowing her cancer “journey” has been. On the cover, she’s quoted as saying she’s “lucky to be alive” and that “I truly felt I was slipping away.” In the article, she reveals that she was warned that during treatment she would feel like she was dying. “I was in a pain I had never experienced before, physically and mentally” she said. Finally! A celeb who is honest about how shitty it is rather than chirping cheerfully about how exciting it is to get new boobs (I’m thinking of you, Giuliana Rancic). Diagnosed with breast cancer in 2007, Roberts had a lumpectomy and chemo. Five months ago she had a bone marrow transplant after being diagnosed with a rare blood disease called myelodysplastic syndrome, which left untreated can lead to a nasty form of leukemia.

She went through hell and now is telling us about it. Good for her.

When I saw her face on the cover of People magazine this week, I felt an intrinsic happiness for her. As I peered more closely at the cover, however, unease settled in. While I applaud her pride in her bald  head and I say cheers to her for not feeling like she needs to cover up the ugly truths of cancer by wearing a wig, I’m uncomfortable with the picture of glamour she presents. 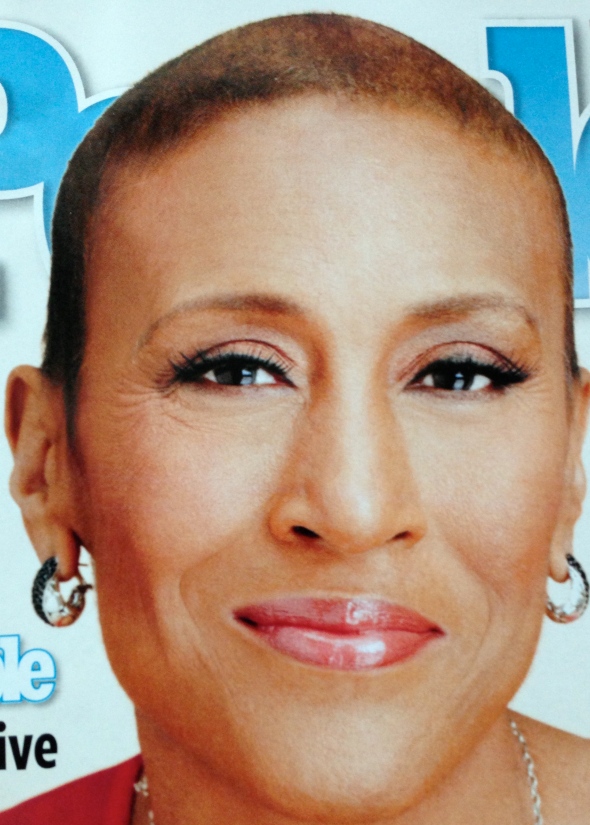 Of course I support a woman’s efforts toward looking good while beating back the beast that is cancer. More importantly, I would never stand in judgement of another person’s decisions along the cancer “journey.” Just as I learned the hard way after my mom’s death that no one has a right to tell me how to grieve, I also believe that no one has the right to judge me for how I conduct myself while I’m in the fight of my life. Let me be clear that I’m not judging Robin but rather expressing the feelings that bubbled forth as I saw her rosy glow on the cover of the magazine.

It sure would be nice if every woman recovering from the ass-kicking effects of chemo had a professional make-up artist to apply fake eyelashes and pencil in thick, shapely eyebrows. I for one would have loved to have had someone come into my beleaguered home and apply just the right amount and shade of foundation to even out my beat-up skin and cover up the dark spots that cropped up from chemically-induced menopause. How nice it would have been for someone to lightly feather my sunken cheeks with some rosy blush, especially on the days in which it was an effort to get out of bed to brush my teeth. A sheen of pink lipstick and the extra shine of lip gloss would have perhaps disguised the fact that my mouth was rarely smiling during my darkest days after sacrificing both my breasts so I might have a better chance of being alive to see my kids grow up. While the post-mastectomy infection I contracted “saved” me from chemo — can I consider that nasty bug a blessing in disguise? — and I didn’t lose my hair, I definitely lost a chunk of self-esteem. Cancer does many things to our bodies and minds, and the havoc it wreaks on our appearance and self-image is vast, far-reaching, and long-lasting. I often wonder if I’ll ever feel good about my body again. I’m glad Roberts looks so put-together and rosy on the cover of People, but I wonder how realistic that is.

Ladies, raise your hand if you felt this pretty after your cancer treatment. Guys, let me know if you felt pampered and restored after yours.

Is it not enough that we have to battle this vicious beast called cancer? Do we have to look pretty while doing so and afterward?

My blog friend Renn at The Big C and Me wrote eloquently and movingly on Roberts’s return. She astutely pointed out that Roberts’s fame enabled her to have access to the best health care (likely without concern for her portion of the treatment) and she was lucky that her sister was a perfect match as a bone marrow donor. She also had the support and well wishes of millions of people, who cheered her on and encouraged her during the darkest days. Not everyone has those luxuries, and while I’m glad Roberts does, it bears mentioning that she’s an exception, both in her privileges and in her team of beauty magicians and stylists who help her look so good after going through so much. 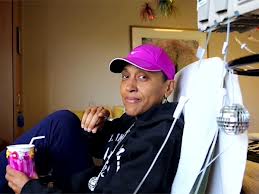 In addition to the perks awarded celebs battling cancer, I think it’s safe to say that much of her success in her fight comes down to her attitude and her resolve. While cancer patients take a beating from well-intended people reminding us to stay positive, Roberts seems to have done just that. She seems feisty and determined to prevail over both breast cancer and myelodysplastic syndrome. In the magazine article she says she blinged out her IV pole with a disco ball (seen above) and made the most of the awful reality of being confined to her hospital room after her transplant. She’s goes on to say that “People say to me, ‘You’re so strong.’ But what was I supposed to do? I want to live.”