I guess Harry was worried about me today. While I was at the medical center (all day!) taking care of some pre-op business, he had a BIG accident that wasn’t quite solidified.

Suffice to say, I came home to an atrocious smell and found a gigantic pile of mess in the dining room.

Thank goodness the entire downstairs is tile. Otherwise, I’d be ripping up carpet and throwing it on the front lawn instead of typing this right now.

After a long day at the hospital, this wasn’t what I would have liked to find.

Poor Harry. He’s always had a nervous stomach. His tummy gurgles a lot, and he’s had some issues with his backside off and on.

Some sort of doggie IBS, I guess. He’s high-strung and can be quite grouchy, and the retired neighbors who walk up and down the sidewalk in front of our house multiple times a day really set him off.  Maybe he needs more time lounging on the couch. That’s relaxing.

He’s a nervous traveler, too.

He’s famous for stealing food when no one is home. He has a big appetite.

I found this when I came home one day a couple of weeks ago. Harry had gone into the pantry in my absence to look for a snack. He lucked out, and found about 2 dozen rice krispie treats within reach. Score!

He picked the wrappers clean. There wasn’t a speck of krispie to be found in all that mess.

He was full, but ashamed. He wouldn’t even look at me.

He knew he’d been bad, but he just couldn’t help it.

His sweet tooth is a powerful force.

Curiously, he never gets sick after his thieving.

He’s eaten an entire loaf of whole grain seedy bread from Whole Foods more than once. I’ll never forget the infamous Christmas cookie incident, in which he unwrapped and consumed 2 platters of homemade cookies that were intended to be gifts.

When we adopted him from the SPCA four years ago, we had no idea that he’s psycho. They don’t seem to advertise that at the SPCA. But he is psycho. 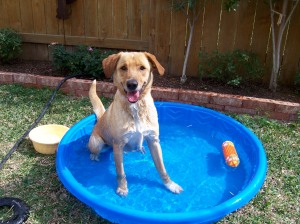 He loves the water.  The day we brought him home from the SPCA he jumped right into the kiddie pool.

He was so happy when we built him a real pool, and he swims a lot.

He swims alone, with the kids, and with his friends.

No matter the weather, he will swim. If there’s a leaf in the pool, he won’t rest until he fishes it out. Same goes for bugs.

He and Snoopy spend a lot of time in the pool together.

Harry has a major oral fixation. He has to have something in his mouth all the time. Preferably a tennis ball. We have about 100 tennis balls in the house and in the yard on any given day. That boy is crazy for tennis balls. If we throw two balls in the pool at the same time, he’ll put them both in his mouth. At once.

I told you he was psycho.

He loved this jolly ball so much we ended up having to hide it from him. It was hard plastic, and just big enough that if he held it in the right spot, he couldn’t see where he was going with it in his mouth. He crashed into a lot of walls, and people, before we hid the jolly ball.

He loves to carry his collar in his mouth, and shake it like a small animal destined to die a slow death at his hands. He usually ends up whacking himself with the metal ID tags, but he’s gonna kill that collar.

Sometimes he can’t find his collar or a tennis ball, so he’ll grab whatever is handy.

The bath mat will do. And if he can’t find something to put in his mouth when we get home, he will go crazy looking for something, anything. Scraps of paper, dirty socks, kitchen towels. Nothing is off  limits for Harry.

He’s also really lucky that Macy loves him so much. She picked him out, and he is definitely her dog. He sleeps in her room, and no one commands his attention like her. Well, except for maybe a tennis ball.

He loves her a lot in return. 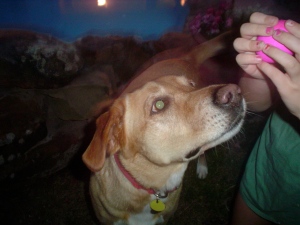 Here she is showing him a cascarone (Mexican confetti egg).

She organizes a birthday party for him every year, and sometimes there’s entertainment, like the cascarones. He wasn’t too interested in the confetti inside, but he did eat the eggshell.

His nickname is Mr. Chin, because he will rest his chin on anything. The windowsill is a favorite spot for Mr. Chin. 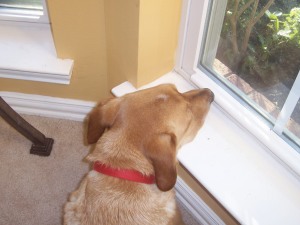 Sometimes he looks like he’s going to dislocate his neck, with some of the positions he settles in, but he always manages to go to sleep, even if his head is twisted.

He’s crazy, but we love him. Even when he leaves a huge pile of nastiness on the floor.