Wisdom from the DL

I’ve been on the DL — disabled list — an awful lot since cancer came to town, and I don’t like it. I don’t like it, but I think I’ve gotten better at it. I’ll never be good at being a spectator in my own life, and I’ll never be one who enjoys the journey in my haste to get to the destination,but I have learned the value of time & place and that sometimes you have to be instead of do. I’ve learned to chant “It’s temporary” a thousand and one times to remind myself that while this is my life, it won’t always be like this.

Josh Beckett all wrapped up, redsox.com

Being on the DL has taught me a lot. Being forced to watch my tennis team while I waited for my body to heal enough to be able to play was one of the single best things I could have done for my game. If someone had suggested it to an able-bodied, healthy me, however, I would have laughed at the idea of sitting instead of playing. But watching helped me appreciate the game on a whole new level. I could focus on the strategies being employed, instead of being on high alert for the ball coming my way. I could study the nuances of each player’s serve, noticing how very different and personal a serve is. I noticed for the first time that everyone — even the best players on the court — makes bad shots. That was enlightening for an always-hard-on-herself player like me. 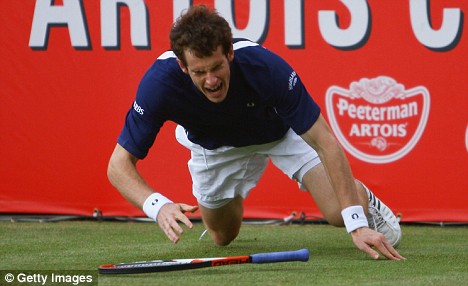 With my next revision surgery scheduled for the day after tomorrow, I prepare to go on the DL yet again. I played my last match of the season last week, and we played our usual Sunday morning 4 sets yesterday. I enjoyed both immensely, knowing that I won’t get to play again for several weeks. But this time, instead of being bummed about having to sit out again, I realized something. Something important. Like my cancer “journey,” being on the DL is temporary, and instead of being anxious and impatient to get back, I find myself contemplative and introspective about my game. It’s not about playing as much as humanly possible, it’s about playing the very best tennis possible for me.

I’ll never say that I want what I’ve got in terms of having been diagnosed with cancer at age 41, in the prime of my life AND my tennis game. But I can say that I’ll smoke ’em if I got ’em. I’ll make the best of my situation, regardless of how shitty it is and no matter how many times I go back on the DL. In addition to channeling Sheryl Crow, I’ll channel the wise & wonderful Dalai Lama and repeat a thousand and one times his mantra of “When we meet real tragedy in life, we can react in two ways–either by losing hope and falling into self-destructive habits, or by using the challenge to find our inner strength.”

I’ll be finding my inner strength.

I know, I know, I’m behind in my blogging. I’ve been busy. No idea what’s keeping me so busy, but suspect it has something to do with drinking Malibu black in the Cremers’ pool; time seems suspended there. Must be something in the water. (I’m all about full disclosure here.) The Sox were in town this past weekend, and we went to see them; the fact that I’m just now getting around to posting about it is wrong, just wrong.

Minute Maid Park is a gorgeous ballpark, if I do say so myself, and I hope the Sox enjoyed their visit as much as we did. The retractable roof is pretty cool, and the glassed-in views of downtown Houston show off our fine city in all its corporate splendor.

The outfield wall is capped off with a train full of giant orange blobs. I’m not the only person who wondered why in the world there was a train-load of pumpkins at the ballpark only to realize that, duh! they’re oranges. Minute Maid Park. Get it? If an Astros player hits a home run, the train chug-chugs along the length of the outfield wall. Suffice to say that train has been pretty dormant lately. 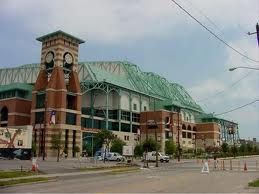 The picture below shows you what the stadium looks like with the roof open. There are little tiny motors that turn as the giant walls of glass slowly, slowly slide apart before your very eyes. At first the movement is so slight as to be nearly undetectable. But before long, the chink between the seams of the walls becomes wider.

The trainload full of oranges. Betcha I could make a lot of mimosas with them. 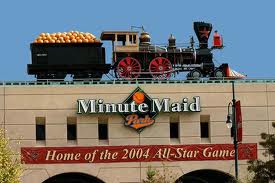 Before the game, we did something I’ve always wanted to do, and now that we’ve done it, I feel like a true Houstonian. We ate at Mama Ninfa’s–the original one on Navigation, very close to the stadium. Ninfa’s is a Houston institution, with franchises all over the city, but the one on Navigation is where it all started. She’s credited with creating the beef fajita, which is now a mainstay in most Mexican restaurants. 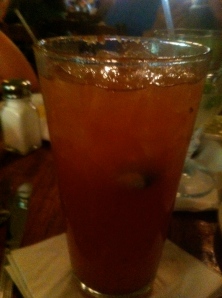 I can’t vouch for the beef, but can safely say that the michelada was delicious. There’s a section on the drinks menu devoted to micheladas, with the opportunity to choose which beer will be mixed with the addictive array of spices. There are 15 choices. I have no idea what the spicy salt was on the rim of the glass, but my lips burned for 2 days after consuming every last crystal.

The seafood cocktail was out of this world. Gulf shrimp and sea scallops tossed with avocado chunks and a spicy, lemony cocktail sauce. Yum.

As tempting as it was to get a 2nd michelada, it was time to scoot on over to the ballpark. Ninfa’s offers a shuttle from the restaurant to the park, and we happily jumped on. The passenger van was perfectly pleasant for the short hop on the way to the game; coming home, with at least 40 people crammed into that same van, was a different story. Wooshegaga, that’s a claustrophobic’s worst nightmare: tight quarters, hordes of people and Houston traffic. Yikes.

It was all worth it, though, to see my favorite team and my favorite player. Ells wasn’t in the line-up for the Friday night game because of the flu he picked up from Josh Beckett. He rallied with the help of some IV fluids, though, and sparkled in center field and dazzled as the lead-off hitter. Here he is, at his first at-bat. I know, the pictures are terrible. I finally got a new camera, since the iPhone camera leaves much to be desired, and forgot to take it to the game. Sheesh.

He’s in the middle, with his hat off for better close-ups. One of the Boston papers ran a headline today that says “Ellsbury displays All-Star form” and I think it refers to his play, but could just as easily refer to his form.

He got his 500th hit today, and was selected for his first All Star game on Sunday. All that, plus a mention on this blog? He’s in tall cotton.

Now all he needs is a mohawk, like the All Star player who lives at my house: