I told my family that if team Greece won its game against Costa Rica in the World Cup last week, I would make pastachio. While the Greek boys lost the game, once the word “pastachio” entered my teenage boy’s brain, the deal was sealed.

If you’ve never been lucky enough to eat this dish, you need to get yourself to a Greek restaurant or find yourself a nice YaYa to invite you over, pronto. It’s been called the Greek lasagna, but most Greeks scoff at that comparison; as if lasagna compares.

Here’s the blueprint: long, tubular pasta layered with a meat sauce simmered in tomato sauce and spices, topped with not one but two bechamel sauces — one thin and one thick — and not one but two layers of ground Romano cheese. Bake it until it comes together to form a version of heaven on Earth.

My sweet mama was not Greek, but she was clever, and she ingratiated herself into the hearts of the Greek ladies I grew up with and learned how to cook like they did. Greek ladies can be rather exacting when it comes to their cooking, and most would not welcome a “white” woman into the fold. My mom, however, was famous for breaking through such barriers. She learned to cook with the best of them.

She was also famous for transcribing her recipes in a kooky way. The most widely repeated example is her recipe for chicken crepes (yes, homemade crepes) that contain no chicken. Good luck pulling that one off, amateurs.

Her pastichio recipe isn’t missing any key ingredients (as far as I know), but it is light on descriptions and specific instructions. As in: “Prepare the thin sauce by melting the butter and adding the flour when it’s time.” Ok, over what kind of heat? Medium? High? And what exactly does “when it’s time” mean? And how does one know when the “thin” sauce is thickened enough to add the egg? It is a “thin” sauce, after all.

My mom taught me how to make pastichio, and while it’s a foolproof way to win friends and influence people, it’s also a lot of work. A lot. Really a lot. I don’t take on pastichio on a whim. But seeing Team Greece in the World Cup inspired me (and my #1 son pestered me). But mainly I was inspired. It had nothing to do with this 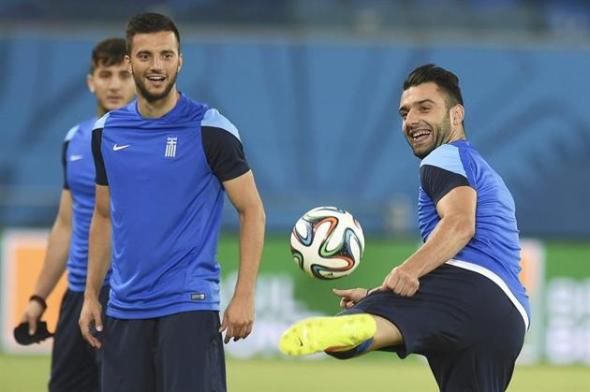 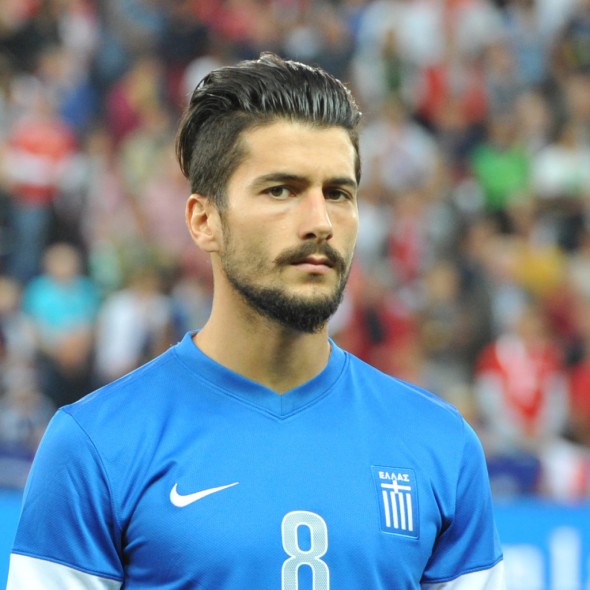 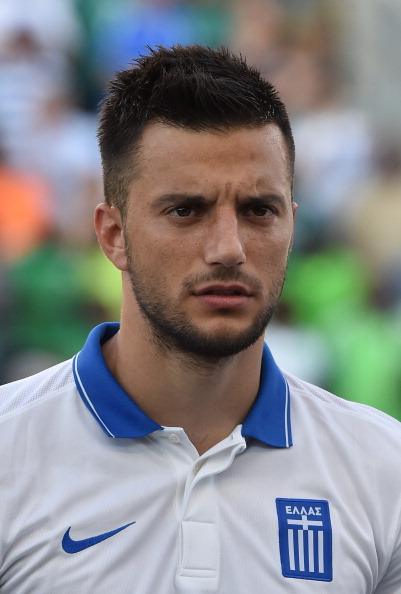 And it certainly had nothing to do with this 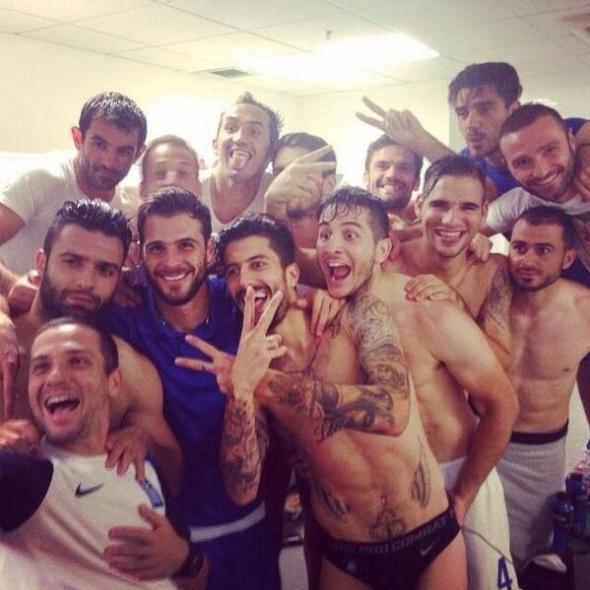 Back to the recipe.

For the food that my son, my pride & joy, asked me to make.

To start, I make the meat sauce. I brown grass-fed, antibiotic-free ground beef with  a large chopped onion and 3 minced garlic cloves until the meat is cooked through and the onion is tender. Then I add tomato paste, oregano, basil, salt, pepper, and a pinch of ground cinnamon, along with 2 cups of water. Some pastichio purists do not add the cinnamon but prefer to sprinkle the very top of the dish with ground nutmeg. I do it the way my sweet mama taught me, though, and she used cinnamon. Let that simmer until the flavors are melded and the liquid is absorbed.

Next boil the pasta. Then make the sauces. The “thin” sauce, as my sweet mama called it, is butter, flour, milk and an egg. I will always remember watching her make the roux and her telling me that you know when the roux is done by the way it smells: nutty and browned. Whatever that smells like, I thought, but now I know. I just know. After the roux is sufficiently nutty & brown smelling, in goes the milk and you whisk like your life depends on it. No lumps! No scorching! Don’t even think about turning away or mixing yourself a cocktail. Whisk! Whisk!

Once the “thin” sauce has thickened (again, you’ll just know when it’s thick enough, even though it’s a thin sauce, she used to say), temper the egg and again whisk, whisk, whisk, then whisk some more. No curdling! No clumping!

When the “thin” sauce is done and the pasta has cooked, start assembling: cooked pasta in a buttered casserole dish, then top with the “thin” sauce. Top that with copious amounts of Romano cheese. When in doubt, add more cheese.

Then get back to the stove to make the “thick” sauce. Same ingredients as the “thin” sauce but different proportions. Ditto the Olympic whisking. I always wonder why every Greek lady I ever met had bat-wing arms, even with all that whisking. You’d think they’d have Michelle Obama arms, but they probably ate the finished product and didn’t pump iron. I’m in pretty good shape and pump iron regularly, yet this Olympic whisking wears me out. I seriously need a cocktail (maybe two) when it’s done.

So, once the “thick” sauce is done and you’ve had a cocktail (or two), it’s time to add the meat sauce to the pasta/”thin” sauce/cheese layer. Spread it on thick and pat it down lovingly. There is a lot of love in Greek food.

I was so tired from all the whisking, I forgot to take a photo of the meat layer lovingly patted into place, so imagine it in your mind. While you do that, I’m mixing another cocktail.

Meat sauce lovingly in place means it’s time for the “thick” sauce. But before you put it on top of the meat sauce, whisk in more cheese. Yes, more cheese. And yes, more whisking. Which means yes, more cocktails.

So, “thick” sauce is made even thicker with more cheese and is glopped on top of the meat layer.

(I’m pretty sure my sweet mama never glopped a single thing in her kitchen, but that’s how it goes down in mine.)

Once the “thick” sauce is in place, sprinkle the top with more cheese. Then add a little more. You can never have too much. 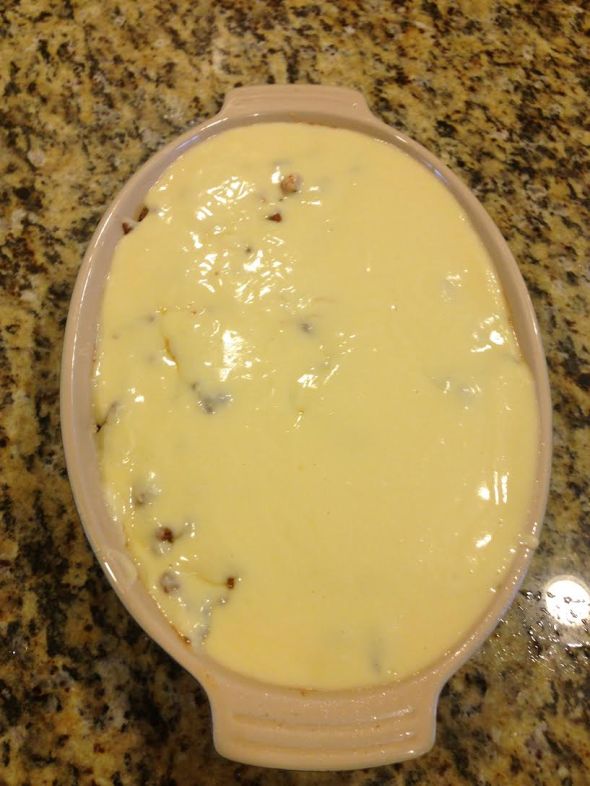 I make a small pan of meatless pastichio.

There. I confessed. The secret is out.

If you’ve seen the movie “My Big Fat Greek Wedding,” you know what I mean. My Greek relatives shake their head and cluck their tongues at my meatless ways.

It’s ok. Really. It is. I may not eat meat, but I make good cocktails.

Once the pastichio is assembled (whether meaty or meat-free), there’s one more step, and this is one I cannot abide. Another reason for having my heritage revoked I’m sure, but I just can’t do it. The final step is to spread melted butter over the top of the “thick” sauce and the last layer of cheese. Can’t do it. Even though I burned at least 3,000 calories just from the whisking, I can’t do it.

Into the oven it goes, sans butter, to begin its final transformation from simple ingredients to food of the Gods. The Greek Gods.