An appointment and some art

Lovely surprises lurk around every corner.

Sounds like a corny message from a fortune cookie, right? Certainly not what you expect from this little blog, which is typically full of snark. Allow me, if you will, to deviate from the gnashing of teeth, shaking of fists, and renting of garments usually contained within this site.

I had an appointment at the med center this morning to have my wonky thyroid checked out. I love the fact that I live in a city that is home to the world’s largest medical center and that world-class care is available to me.

Some fun facts about the med center:

Indeed, everything is bigger in Texas.

Ok, so being the most kick-ass med center isn’t enough. TMC also throws up some pretty nice artwork–hence the lovely surprise. This morning while hoofing it from the endocrinologist’s office to the radiology department (a portion of the 1.5 square miles mentioned above) for an ultrasound, I passed some unusual artwork and stepped in for a closer look. Picasso said, “The purpose of art is washing the dust of our daily life off our souls,” and I was all for giving my soul a little spit-shine.

The minimalist approach of the first piece caught my eye, with its interesting color combination and deft brushwork. The combination of long, thin brushstrokes and fat, wide ones hold a lot of appeal.

The second piece is much busier and conveys a very different energy. The squiggles suggest movement and a fast pace, and the composition suggests the artist has a lot to say and says it quickly.

Painting number 3 is a bit more purposeful and controlled. The brushstrokes suggest a certain scale to me, and my first instinct is big. Or perhaps the suggestion of large size comes from the predominance of orange, which to me is a color that speaks out loud. 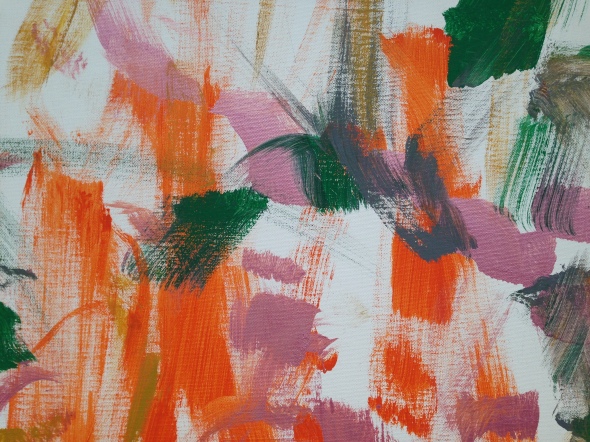 Back to a minimalist style for the fourth piece. The ratio of color to white space is quite different from the other pieces. While the pieces share a similar color scheme, they are vastly different.

The fifth painting could have been done by the same artist as painting number 4, with its similar colors and use of white space. The restraint that comes from the white space impresses me, as my instinct would be to cover a canvas with as much color as possible. Restraint has never come naturally to me.

Hmmmm. Very intriguing. I’m no art critic, but I like what I see, and I definitely like these pieces.

Would you believe that each piece was painted by a resident of the Houston Zoo?

The first piece was painted by Shanti, an Asian elephant who, according to her artist bio, is pretty serious about her craft. She dips her paintbrush into sand to give her paintings a mixed-media effect, and unlike the other elephant artists, she curls her trunk around the brush rather than holding it with the “finger” at the end of her trunk. She employs a keen concentration while painting and then likes to unwind by horsing around in the pool (she’s known for swimming in circles to make waves while the other members of her herd are in the pool).

The “busy” feel of painting number 2 can likely be attributed to its artist: an otter named Wednesday. This playful painter likes to walk through a puddle of paint and then step onto her canvas, hence the stippled look of the predominant green paint. She has been known to take a break from painting to go for a swim, then return to her canvas and let her wet feet create a true watercolor. Her motto: Will paint for fish.

The purposeful, controlled painting number 3 belongs to another Asian elephant named Methai. Before becoming a painter, Methai was a circus performer in Thailand. She’s a musician as well as an artist and can play several instruments, including the harmonica. Methai is the most prolific elephant artist at the zoo, and like Shanti, she too is all business when she paints: she is known to squint her eyes in concentration.

Painting number 4 was done by Harry, a White-faced Saki monkey. He’s a tree-dweller from the South American rainforest who mastered the art of painting quickly. He works fast, often completing his masterpieces in mere minutes, and tends to be pretty laid-back, although rumor has it he sometimes gets a bit frenetic about his work and ends up with paint all over him once he leaves the studio.

Credit for the last painting on exhibit at TMC goes to Cali the sea lion. The smart, playful sea lions are a crowd favorite at the Houston Zoo, and when Cali isn’t putting on a show or hunting for fishy treats, she’s churning out paintings like the one on display at TMC. She holds a paintbrush in her mouth to create her masterpieces, then hops back into the pool to frolic with her buddies.