A blow-out end to my cancer-versary

It has been suggested by the author of this little beauty that I orchestrated the death of Osama bin Laden as a bookend to my cancer-versary celebration. He suggested that while I am “a bad-ass bitch” and have kicked cancer to the curb, this may be taking the celebration too far.

Oh, if only I had that kind of power. Oh, the things I could do. And really, who’s to say how much is too much when it comes to celebrating? I was going to write about our trip to the Museum of Fine Arts to see the National Gallery’s Impressionist exhibit yesterday, but this is way more important. Art can wait; the idea of me having that kind of power is intoxicating! 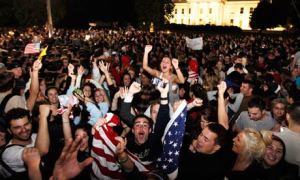 Although I don’t actually have the power to hunt down and kill the mastermind behind our national tragedy, the idea does appeal, and believe me, I have a lot of pent-up energy from my “cancer journey” and would have loved the chance to spew all that on Mr. Pure Evil. Well, it does at least give me an excuse to take a leisurely stroll down memory lane, to the days after September 11, 2001, and the events that changed the world.  I’m glad that President Obama finally has some good news to report.

I can imagine him practically sprinting down this lofty hall of the White House to the press corps, ready to shout the news from the rooftops, but being bound by presidential decorum. 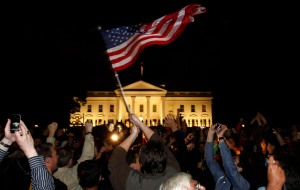 Many things changed when bin Laden brought his personal brand of evil to US shores. The idea that the most powerful nation in the world was not immune to an attack by a crazy man with far-reaching power and an army of jihadists was foreign to us before September 11, 2001. Our sense of security was shaken, and air travel would never be the same.

I imagine everyone has a “where were you on September 11th?” story, much like recollections of where one was when JFK was assassinated. For me, I was chasing a wildly headstrong toddler around and expecting a second bundle of wildness. 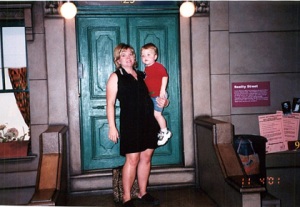 Here I am with Wild Thing #1 in my arms and Wild Thing #2 in my belly at the Sesame Street exhibit at the Houston Children’s Museum. Yes, I notice that the 2-year-old child is almost half as long as me. That 2-year-old is fixin’ to turn 12 and can look me in the eye without a step-stool. But this is what he looked like in the days of the terrorist attack on these United States. 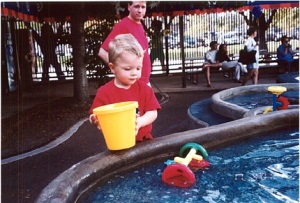 Wild Thing #2 turned out to be even wilder than her predecessor, and has shaken things up to a degree not even I, with my wild imagination, could have predicted. We should have known we were in for a wild ride with her, when she caused some much upheaval from the git-go. Her time in utero was not uneventful, and when she deemed it time to come into this world, she did it with a bit of an explosion. And that’s all I’m going to say about that. With her chubby cheeks and impish grin, she fooled us into thinking we were in control. 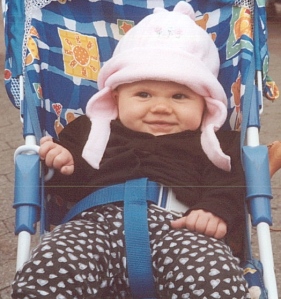 On the day before the terrorist attacks, I had a sonogram to get a glimpse into Macy’s world. She afforded the ultrasound technicians some beautiful pictures of her swimming around in her own private pool. We didn’t want to know her gender before she was born, preferring to be surprised like we were with Payton. There are so few great surprises in life anymore, and to us, the idea of being able to tell our friends, families, and loved ones “IT’S A BOY!” or “IT’S A GIRL!” was pretty special.

We wanted to have that chance again the second time around, and told the technician and the doctor emphatically that we absolutely, positively did not want to know this baby’s gender.

Sure, no problem, they said, and proceeded on with the sonogram, talking in code to describe what they were seeing without giving it all away.

Everything was working beautifully, until they slipped, and ruined the surprise.

I thought this was the worst thing ever! The end of the world! These idiots had ruined my surprise!

I cried my eyes out that afternoon, and while I knew I was fortunate to have a healthy baby growing inside of me, I was inconsolable about having my surprise jerked away from me. The pity party was in full swing, and all the pregnancy hormones associated with Wild Thing #2 raged on through that evening.

I went to bed on September 10th with eyes swollen from crying, and awoke to the news that terrorists had attacked the World Trade Center. My pity party came to a screeching halt. 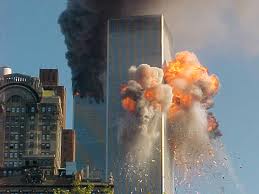 In the days that followed the attacks I was tense and restless. Rumors abounded of more attacks, and of Houston being a target because of its energy industry. I was glued to the news and gobbled up every human interest story that came my way. Three days after the attacks, in the midst of so many thousands of lost lives, we suffered another loss as Big Ed, the patriarch of our close family friends, succumbed to the ravages of pancreatic cancer.

The two events will forever be intertwined in my heart and mind. The images of September 11th are burned into our nation’s collective conscience, and the despair of cancer claiming yet another one of the good guys brought my aching heart even more sorrow. US flags flew from buildings, homes, firetrucks, even baby strollers. Patriotism had a renewed vigor, and our nation pledged to never forget the victims and the heroes of 9/11/02. Our smaller circle raised a toast to Big Ed and vowed to remember him always. If he hadn’t been stopped by cancer, I could imagine him packing all his tools and a thermos of Dunkin Donuts coffee into his pickup truck, and driving from Massachussets to New York City to lend a hand. That’s the kind of guy he was, and like the victims of the terrorist attacks, he is sorely missed, all these years later.

It took nearly a decade, but the great karma wheel finally caught up with Osama bin Laden. A lot has changed, in the world and in my own little corner of the universe, since the terrorists came to town. My firstborn continued his wildness, but eventually settled down into a quiet, baseball-loving kid. My second child was born, and the chaos that is Macy still ensues. We moved from Sugar Land to Durham, NC, for a 2-year stint.

My sweet mama joined Big Ed in becoming yet another victim of the vicious beast we know as cancer. Maddy, the best dog in the world, thumped her old, white tail,

winked at me one last time, then left me forever. My own home was dive-bombed by cancer, and my life and that of my family changed forever. While my “cancer journey” has a happier ending than my mom’s and Big Ed’s, it’s left me shaken and uneasy, constantly searching the sky for approaching planes.

I shudder to think at the number of lives lost and the huge amount of money spent on this war on terror, so for today, I will celebrate the triumph of good vs evil.