My bestie Yvonne and I went to see Oprah on Friday, and wow, wow, wow, what an event!

The Queen of the World brought her road show to Houston to tape 4 episodes of LifeClass, a show on the OWN network. Lifeclass is described on her website as “a program that showcases all of Oprah’s lessons, revelations, and aha moments over the past 25 years broken down to help make your life better, happier, bigger, richer, and more fulfilling.”

She and her crew travel around the country and, along with a co-host who is the resident expert on the topic du jour, teach the rest of us how to live our best lives. It’s a social networking explosion with participants joining in from across the globe via Skype, and the audience members are heartily encouraged to post on Facebook and Twitter while the shows are being taped.

Yvonne spotted the chance to enter the lottery for tickets to the 4 shows being taped last week in Houston, and when she came up the big winner she invited me to be her date. We had such a fun day — in typical Texas fashion, we started early and ended late.

About our pre-Oprah lunch at the Backstreet Cafe, I have one word: yum.

We both chose the crab salad, and I’m so glad we both ordered it or we might have come to blows over it. I love Yvonne way too much to fight her, but yes, it was that good. It reminded me of the famous crab towers our dear friends the Cremers fed me on one of my first outings after my double mastectomy. The Cremers’ version has more avocado and more citrus, which gives it a slight edge, IMHO.

Tummies full, we headed to the Hobby Center for the main event. We were instructed to arrive early and wear bright colors, which look best on TV. Audience members have the opportunity to fill out a questionnaire and share things from their personal lives in hopes of being part of the show and interacting with Oprah and her co-host. Yvonne and I declined; I figured I get all the therapy I need by spilling my guts and ranting about life’s injustices on this little blog. I don’t need to be on TV with Oprah and her resident guru.

The set was rather minimalist, with a simple white table and 2 white rolling chairs that look like something you’d see in a home office. Several screens lit up the backdrop: one devoted to the live Twitter feed, one for the Facebook posts, a couple for quotes as the show progressed, and a big one for the Skype participants. The lights were quite bright, and I kept thinking they would dim as Oprah and her guest came onstage, like in the movie theater. They did not. 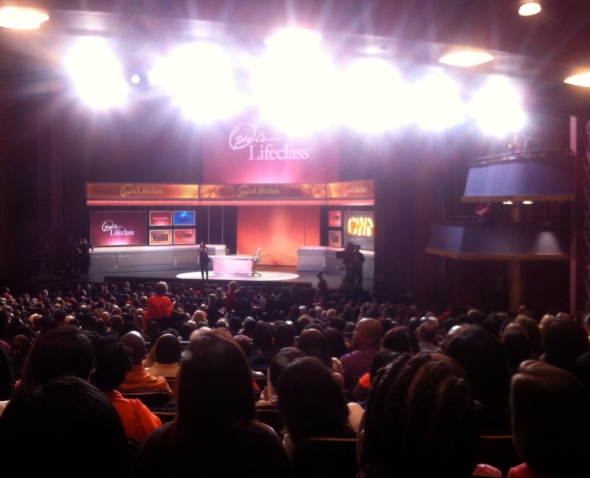 Before Oprah came onstage, her senior audience supervisor, Sally Lou, came out to read us the fine print and go over the rules, then get us fired up for Oprah! Sally Lou was perky and funny and incredibly energetic, especially considering they had already taped 2 shows with Joel Osteen that morning. She wrangled the crowd and had everyone hootin’ and hollerin’ when it was time for Oprah to appear. 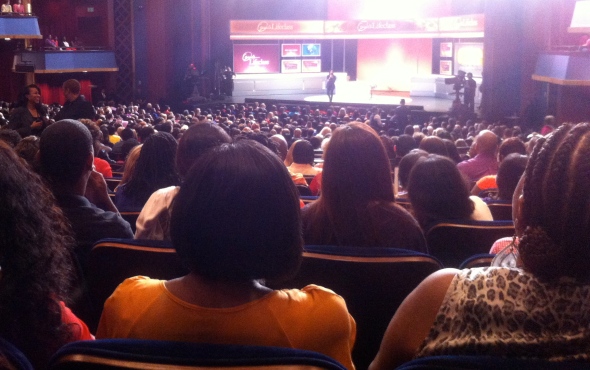 The moment in which the announcer introduced Oprah and she took the stage was no doubt one of the most powerful things I’ve ever experienced.

The crowd was in a frenzy. Everyone was on their feet, and the cheering was deafening. I can’t even imagine what it must be like for Oprah to experience that everywhere she goes.

Yes, the photo is blurry, but it’s Oprah!! In person!!

For the first segment, she wore a cute magenta dress and heels. Her look was very simple, as if she wanted the color and cut of her dress to speak for themselves. She looked trim and healthy, and was full of energy despite the fact that it had already been a long day before she started our taping. She changed into an orange dress for the second segment, which I didn’t bother photographing because I could tell the iPhone pic of the magenta dress was going to leave much to be desired.

Watching her do what she does was quite simply fascinating. She is just as polished and professional as you might imagine. She is warm and funny, and her interactions with the audience were personable and fun. Her co-host for our tapings was Rick Warren, author of The Purpose-Driven Life and pastor at Saddleback Church in Southern California. I tried to read his bestselling book when it first came out and was all the rage, but it just didn’t work for me. I’m pretty much the only person it didn’t work for, though; Oprah says it’s sold some 30 million copies worldwide, has been translated into more than 50 languages, and is the bestselling nonfiction hardback book ever, second only to the Bible.

That’s ok, I’m used to marching to my own beat.

Anyhoo, Rick Warren is similar to Oprah in that he’s very, very good at what he does. He seems quite personable for a multi-millionaire, and has no trouble filling the air space with his parables and personal stories. He’s a bit too preachy for me, and there were times in which my attention lagged while he ventured off on yet another sermon-y lesson, and the majority of the advice he dispensed seemed very much based in common sense. Yvonne and I felt like quite the smarty pants because we were way ahead of Pastor Rick’s advice to the struggling and lost souls who sought solace from his folksy, common-sense wisdom.

Both tapings we witnessed are scheduled to air in January 2013, so Oprah said “Happy New Year!” a lot. I’m sure glad she didn’t slip up and make reference to the fact that it was 90 degrees in Houston Texas that day! That would have been a bit incongruous with a January airing. The first segment centered on Rick’s update to The Purpose-Driven Life, which will be published soon. I didn’t get the exact date because frankly, if I couldn’t get through his book the first time, the updated version holds little interest for me. The theme is how to manage the cards you’re dealt, which is something everyone can likely relate to, regardless of whether they find Pastor Rick a bit too preachy and a bit too sermon-y. The one thing he said that really stuck with me, out of the hundreds of soundbites and cleverly packaged sayings he shared, is this: “A wise person can play a bad hand and still be a winner.” True dat. He’s also a big believer in happiness being a choice and reminded all 3,000 of us in the Hobby Center that we can be as happy as we choose to be.

I was happy when Oprah delivered this pearl of wisdom in regards to the practice of comparing ourselves to others and trying to keep up with the Joneses: “You can only wear one pair of shoes at a time.”

I like that little reminder and find it quite timely in our world of ever-increasing stuff and the pursuit of more of it.

There’s an aha moment for ya.

The second segment focused on what our reason for existence happens to be. Pastor Rick seems determined to make sure each and every one of us finds out why we’re on this Earth. He spoke a lot about a life of service (which, as an at-home mom I feel quite well-versed in, thank you very much). His idea of a life of service is a bit more big-picture and a bit more mission-oriented than mine. Personally, I don’t think one must dig a well in Central America or teach English to Indian children in a primitive village to serve. In my small-world application, serving others might mean parenting my different-as-night-and-day children in the manner that suits them rather than the one-size-fits-all approach that may be easier for me. It might mean speaking openly and honestly about the ugly truth of breast cancer instead of tying yet another pretty pink ribbon on it and adding another coat of glossy pink lipstick.

As Oprah finished the second segment, she spoke directly to us, the audience. The first thing she did after the show ended was take off her shoes. She stood at the edge of the stage and thanked us for taking the time to get dressed up and for coming to see her. When someone from the audience yelled out to ask if she’d take a picture with them, Oprah flat-out said no and went on to explain that if she took a picture with one person, everyone else in the Hobby Center would want to do the same and none of us would ever get out of there. I really respect that, and it demonstrates that she practices what she preaches when she counsels her viewers to stand up for themselves, to do the right thing even if it disappoints someone. As someone who lives and dies by ratings, it would be easy for Oprah to get caught up in the idea that if she says no to a viewer’s request, they might not like her anymore, and her livelihood and her very existence is predicated upon people liking her and tuning into her shows. Granted, at $2.7 billion she can afford to have a few people be ticked at her. I was perfectly content to leave without a picture of myself and Oprah; I’ve got plenty of good memories of our time together on Friday afternoon.

Trying to decide what our purpose on Earth is generated a powerful hunger, and our delectable crab salad seemed long gone by the time we crawled through traffic in downtown Houston and away from Oprah.  Several roads around the Hobby Center were closed in preparation for the next day’s Komen Race for the Cure — how ironic that Komen impeded progress even as we tred to get to dinner. After navigating the detour for the cure, my foodie friend and I headed straight to Brasserie 19 to fortify ourselves. We talked the whole way out of downtown about what we think our reasons for existing may be. Yvonne’s seems easy: she’s a therapist and she helps lots of people with real-world problems. Mine seems more elusive. She suggested my little blog may be part of my purpose in life: to blab ad nauseam about breast cancer truths or any other topic that flits into my head. Perhaps.

While we may not have figured it all out, one thing is for sure: with all of Oprah’s talk of Happy New Year, we decided that our purpose in that moment, after a glorious day in a once-in-a-lifetime arena with Oprah, was to celebrate life and drink champagne. 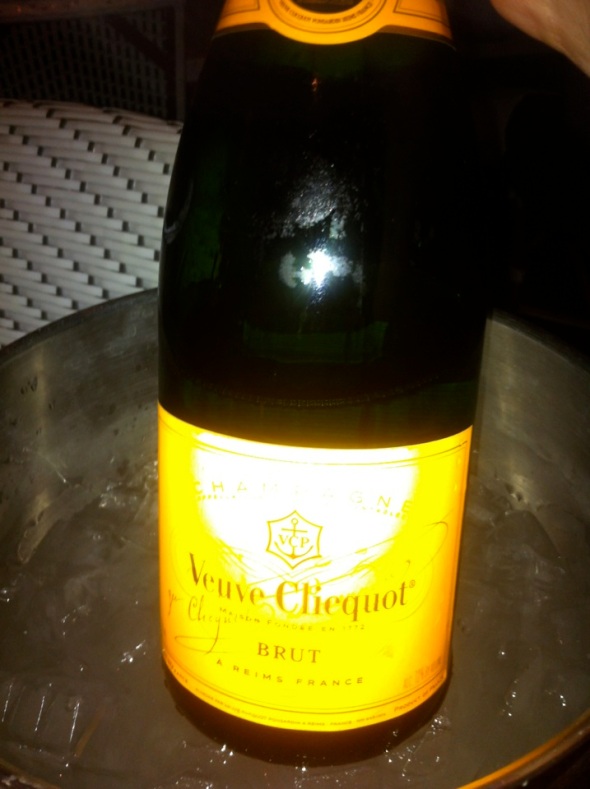