Day 7 of the WEGO Health Activists Writer’s Month Challenge (HAWMC). Has it really only been one week? Dang, this is harder than I expected. Today’s challenge is much easier than yesterday’s was, though: What’s the most ridiculous thing you’ve heard about health or your condition?

There have been many ridiculous things said and written and passed along about my “condition.” Thanks to Komen, breast cancer is commonly thought of as the “good” cancer, the “pretty” cancer. You know, the one wrapped in a girlie pink ribbon and represented by rosy-cheeked, full-breasted warrior-women crossing the finish line of the race that’s allegedly going to “cure” my “condition.” (In fairness, it’s also thanks to Komen that my “condition” is one I can blog about without shame or fear or offending someone by using the word “breast.” Betty Ford gets credit for that, too. I can like Komen for de-stigmatizing my “condition” but still shake my head at its idiot pinkwashing.)

One of my all-time favorite ridiculous things said about my conditions is “Well, it sucks about the cancer, but at least you get new boobs.”

I didn’t need new boobs. I was just fine with the set I had. The new ones? Notsomuch. Perhaps this ridiculous statement applies to women who fall into the average age of those diagnosed with breast cancer — mid-60s. If I were 20 years older, I may well think, Hmmm, these old girls have served me well, but it wouldn’t hurt to have a little renovation. But I’m not 20 years older, and I don’t think that. What I do think, though is this: I sure miss my old boobs. And this: Is it wrong for me to envy my pink-ribbon sisters who had the “easy” path of mastectomy to tissue expanders to implants, rather than the not-so-easy path of mastectomy to tissue expanders to several fills of said expanders to infection under the right expander to draining both expanders to removing both expanders to hospitalization for 28 days in one summer to multiple surgeries to extract dead tissue to wound specialists and a wound vac to daily home-health nurse visits to clean and dress that wound to an IV pole in my very own home for round-the-clock IV antibiotics to a year’s worth of oral antibiotics to a hellish reconstruction to two (so far) revisions to try to make that hellish reconstruction’s results palatable. Is that wrong?

Another ridiculous thing said about my condition: “Well, you look good.”

Too bad the general public doesn’t have x-ray vision. Not the kind that lets creepy guys peep under women’s clothing (although I do like the idea of a creepy guy having his retinas burned by peeping under my shirt!), but the kind that lets people see what a breast cancer patient looks like on the inside. Not so good. During the hey-dey of the worst of my BC “journey,” I may have slapped on some lip gloss and clawed through my closet for a top that would accommodate the many stages of my chest expansion. I  may have smiled and said “I’m good” when asked how I’m doing in the midst of my own personal apocalypse. Maybe I looked good on the outside — a little sun on my cheeks is easy to achieve pretty much year-round in the great state of Texas. Maybe I portrayed a person who was faring well despite having both breasts removed — people do tend to see what they want to see, and I’m the queen of refusing to fly my vulnerability flag. Perhaps people just don’t know what to say. Either way, we cancerchicks may look good on the outside, but we feel like crap on the inside.

But the all-time most ridiculous thing ever said (to me) about my “condition” is this. Here’s the truth: if something as simple as eating a particular fruit or swallowing a particular supplement could cure cancer, it would. Period. End of story. Oncologists around the world would be out of work, infusion rooms and radiation centers would be rented out as party sites, and Big Pharma would go bankrupt.

If you’re tempted to share the latest internet craze for curing cancer with someone who’s actually dealing with cancer, let me quote Sweet Brown, my favorite meme:

My first thought was to cure cancer. Today’s prompt said to dream big, so I am. 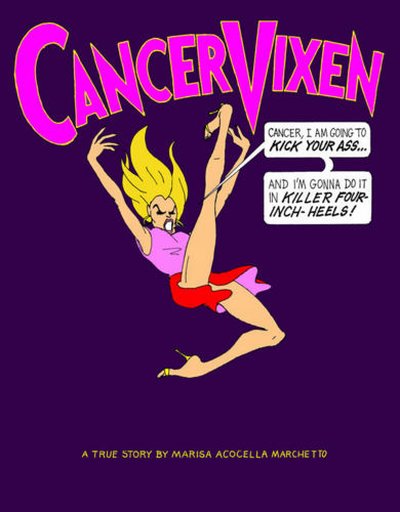 Since it’s my dream, I’m claiming two superpowers. In addition to kicking cancer’s ass, I would eliminate all the stupid/inane/insensitive/uncaring/clumsy/offensive things people say to those of us in cancerland. Yeah, yeah; I know sometimes people mean well and just don’t know what to say, but that’s no excuse. No cancer patient needs to hear a comment like this, or certainly not this, no matter how well-intentioned the awkward speaker should be.

So if I could do anything as a health advocate, I would ensure that no one in cancerland ever had to hear anything like this. Ever. 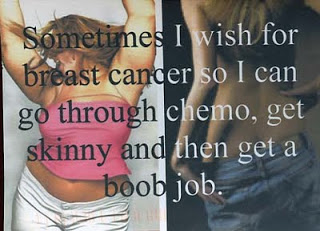