I heard an interview a while back with Dan Marshall, who wrote a memoir about caring for his terminally ill parents. Yes, you read that right: parents, plural. Both of Marshall’s parents had a terminal disease: his mom’s lymphoma and his dad’s ALS. 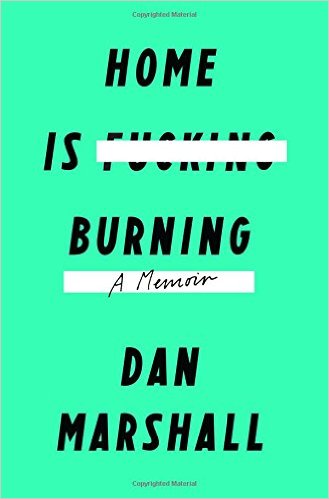 The book, Home is (bleeping) Burning, tells the story of the Marshall family, who (except for their copious and creative cussing) sound like a regular American family living their lives and doing their thing until their regular lives are upended by health crises. Here’s how Amazon describes it:

Meet Dan Marshall. 25, good job, great girlfriend, and living the dream life in sunny Los Angeles without a care in the world. Until his mother calls. And he ignores it, as you usually do when Mom calls. Then she calls again. And again.

Dan thought things were going great at home. But it turns out his mom’s cancer, which she had battled throughout his childhood with tenacity and a mouth foul enough to make a sailor blush, is back. And to add insult to injury, his loving father has been diagnosed with ALS.

Never has there been a more reluctant family reunion: His older sister is resentful, having stayed closer to home to bear the brunt of their mother’s illness. His younger brother comes to lend a hand, giving up a journalism career and evenings cruising Chicago gay bars. His next younger sister, a sullen teenager, is a rebel with a cause. And his baby sister – through it all – can only think about her beloved dance troop. Dan returns to shouting matches at the dinner table, old flames knocking at the door, and a speech device programmed to help his father communicate that is as crude as the rest of them. But they put their petty differences aside and form Team Terminal, battling their parents’ illnesses as best they can, when not otherwise distracted by the chaos that follows them wherever they go. Not even the family cats escape unscathed.

As Dan steps into his role as caregiver, wheelchair wrangler, and sibling referee, he watches pieces of his previous life slip away, and comes to realize that the further you stretch the ties that bind, the tighter they hold you together.

In the interview, Marshall read passages from his book, and just so you know, the language and some of the topics in Home Is (bleeping) Burning may be less than pleasant for some readers. (Does it mean I’m weird/crude/uncouth/all of the above because I really relate to and enjoy the mom, who is the most prolific with her cussing?). Also note that the Marshalls live in Salt Lake City but are not Mormon, and there are some non-PC comments made about their Mormon neighbors. Perhaps this book is not for the faint of heart. But then again, neither are terminal illnesses or recurrences or sick parents. As Greg Marshall (the author’s brother) so eloquently put it: “For the Marshalls, life is a contest to see who is _____-est. Bravest. Weirdest. Grossest. We take our lack of filter to superlative heights.”

Perhaps my own lack of filter attracted me to the Marshalls’ story. It could also be because I too cared for a sick parent. I too experienced the strange role-reversal that comes with caring for a parent. I write often about the terrible yet honorable practice of becoming the authority figure and advocate for the person who, until their illness took hold, was the authority figure and the advocate for me. I write often about how my mom’s death affected me, and continues to affect me. That’s why my ears perked up when I heard about Dan Marshall and his memoir.

This passage got me. Hit me hard. Reminded me of my own sweet mama (without the cussing). This passage describes the family discussion on Christmas day. The topic is how the family will handle Mom’s lymphoma recurrence and Dad’s new ALS diagnosis. Dan described his mom’s stance upon learning her cancer had come back:

“She wasn’t just going to roll over and let cancer f*** her to death. She was going to fight and fight hard. And she suggested we all do the same.”

Indeed. May we all do the same.