← Thank goodness for tile
One more thing to worry us →

I’ll admit it right here, live on the web, in front of however many people are reading my blog today: I’m not 100%  into the whole suburban mommy thing. Thankfully, my kids are old enough now to (A) be in school all day Monday through Friday, (B) no longer need constant supervision, and (C) no longer follow me into the bathroom. Don’t get me wrong, I love and adore my kids, and I think parenthood is a noble and under-appreciated profession, but child-rearing isn’t my whole life, and I like to have some time away from my kids every day.

My favorite thing in the world is to be home alone. I know, I really should set my sights higher.

I crave peace & quiet. I get overstimulated like a small child when there’s too much noise, too many voices, or too many electronic devices running at the same time. I have been known to go to my room for a self-imposed time-out during times of chaos. Which is pretty much every day at my house. I’d like to blame it on the stress in my life from the whole cancer thing, but the truth is, I’d be that way if the words “malignant tumor” weren’t part of my life.

Like many suburbs of big cities, ours is a bubble. Everyone around here is affluent, successful, talented, well-educated and better-than-average looking with kids who are nothing if not gifted and talented. A gas-guzzling SUV is de riguer. A minivan works, too, but sedans, not so much. Nobody cleans their own house (except for me, because I’ve never been comfortable having “the maid” in my house when she and I both know perfectly well that there’s no reason I can’t mop my own floor), and everyone is overscheduled and overworked with overprocessed hair (myself included; I seriously have no idea what my real haircolor is but I know that it gets darker all the time).

Since I’ve never seen an episode of Desperate Housewives, I can’t say that my little bubble is similar to or different from from Wysteria Lane, but some of the stuff I see around here makes me think, you couldn’t write a more outlandish script if you tried.

Like the mother of the first-grader who’s in the principal’s office multiple times a week (the kid, not the mother) for bad behavior who asked the teacher to please call her (the mother) next time the kid was about to be sent to the principal, so she (the mother) could come pick the kid up from school. Apparently the mother “feels bad” for her child because his life is so rough, and it’s not his fault he has such bad behavior, he just doesn’t like to go to bed at night so he stays up until he passes out in front of the TV at 1 a.m. Every night.

Or the principal who nixed plans to have a fundraiser to benefit the family of a child with cancer–a child who had been attending that school until too sick to come anymore–because it might hurt the feelings of kids who don’t have cancer.

Now, don’t assume that all this goes on at my kids’ schools, because I know people in other neighborhoods whose kids attend other schools. And I wouldn’t rat out my own kids’ schools (unless it was a really, really good story). Suffice to say that these are examples meant to convey a sense of an overall picture.

I did camp out — literally, as in spend the night in the parking lot — to ensure that my kids got a spot in preschool, but not because it was the preschool to attend, but because it was the only one with an opening, and I really, really wanted to hand my toddler off to someone qualified for a few hours a week. And yes, I did willingly buy a plane ticket and fly in from North Carolina to camp out at that very preschool (and waited in the cold rain) before we moved back, to make sure Macy had a spot at the same preschool Payton had attended before we moved away.

But I was never really one of those mothers. I looked like the other suburban mommies, I did indeed quit my job and surrender my paycheck to raise my kids, I do drive a gas-guzzling SUV, and I pay a ridiculous amount of money for organic milk to avoid those pesky hormones & antibiotics that my generation consumed.

My kids just aren’t my whole world. They are a big part of it, and if there was a pie chart depicting the parts of my life, the part labeled “kids” would be the biggest. By far. But there would also be a part of the pie for tennis, book club, cooking club, and friends; in other words, I have other interests outside of my progeny.

So imagine how hard I laughed when one of the pop-up ads on my web browser was hawking “Mommy calling cards.”

Have you seen these? 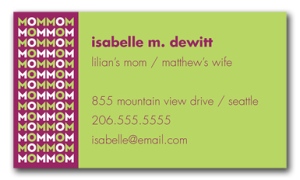 If you have a set, you  might want to stop reading now, because I’m fixin’ to rip on them pretty hard.

It’s not bad enough that this poor woman, and apparently lots of other women, identifies herself as Lillian’s mom and Matthew’s wife, but the card itself screams MOMMOMMOMMOMMOMMOMMOM all down the side. That MOMMOMMOMMOM screaming is the reason I need to hand my kids over to someone else and take time-outs, and now the mommy calling card is not only endorsing but promoting it?

How about this one? Really cute design, I will admit; I really like the smiling fish and the cool blue color, but my first thought was, since when did we get to the point of having to hand someone a card and beg them to be our friend?

Am I making too much of this? Because it seems pretty ridiculous to me.

A quick Internet search turns up all kinds of options for mommy calling cards. Tons of cute designs and fun colors. And I am a sucker for good stationery. I adore heavy cardstock, genuinely appreciate embossed invitations, and have no problem spending good money on paper goods.

But these seem crazy to me.  Really crazy.

This one not only identifies the breeder as Elizabeth & Gabriella’s mom but also has a convenient place to mark the dance card, as it were, and force the recipient to commit to a playdate right here! right now!

You can even have photo cards, to be sure the person you hand it to knows exactly what your kid looks like. Or in case you’re worried that your Olivia or Mackenna will be confused with the other one in her playgroup.

While I do admit that Lindsey Walters is a cute little girl who likely comes from a very nice family, I can’t for the life of me imagine myself seriously handing someone a card hawking my kid.

If Payton were to make make it to the Major League and had a baseball card, I would for sure hand those out to any and all interested parties, but that’s a long time in the future and a big uncertainty. Which is another thing that disqualifies me for Suburban Mommy of the Year; my pesky realistic impression of my kids’ abilities. Some of the baseball parents we’ve met at the fields seem a lot more confident than me that their kid will be the one that hits the big time. Even though the odds are a little sobering: as in about 1 in 200 players. So 0.45 percent of all boys playing high school ball. Not very many. Payton’s Little League has something like 800 kids total, from t-ball to majors. So 4 boys in the entire FCLL, but half the parents up there think there kid is the best thing since Ted Williams. Payton genuinely believes he’ll make it, despite the odds (and more importantly, despite his tendency to depend on his innate ability rather than work hard at honing his craft). And I encourage him wholeheartedly to go for it, pursue that dream and aim high. There’s nothing that would please me more than if it happened for him. But I also tell him to study hard and have a back-up plan, just in case it doesn’t work out.

Because some kind of cosmic force is indeed in effect right now, shortly after the Mommy calling card pop-up ad appeared, I came across a website that offers snarky versions, for the not-so-perfect moms.

Ok, I admit, this one is a little harsh, even for me.

Hush now, I know some of y’all think I’m the queen of harsh, that I invented snarkiness and that I live to mouth off.

This one is a little kinder. A little gentler. Yet gets the idea across.

I admit, I like the bumper stickers that say “My kid could beat up your honor roll student” or however they word it. I wouldn’t put one on my own vehicle, but I snicker every time I see one. Bad mommy.

And I make no promises about little risk of mycobacterium.