← What not to buy me for my birthday
These boots… →

“With the past I have nothing to do; nor with the future. I live now.” — Ralph Waldo Emerson

I’m digging that quote. Today, as most days, I woke up and stole a few minutes before hitting the ground running. I like to check my email first thing in the morning, and see what’s what before I start my day. I have several cancerbabes in blogland whose musings I follow. I don’t know any of these women personally, but we share a commonality that is cancer, and that tends to make friends from strangers faster than anything, including hard liquor.

One of my cancerbabe friends posted some really, really good news on her blog today, and it was the first thing I read this fine morning. Long story short she’s a 28-year-old dealing with Hodgkin Lymphoma who left her home on the East Coast to spend some time in my lovely H-town at MD Anderson to endure a grueling clinical trial.

Sounds pretty awful, right? As most cancers are, whether big or small, early- or late-stage. Cancer is just plain awful. But my cancerbabe blogger friend had good news to share about her just plain awful cancer: the clinical trial worked and she’s in partial remission.

Another strike against the many-faceted and much-dreaded disease that is cancer.

I read the rest of my emails with a smile on my face, and as I hauled myself out of bed, that smile stayed with me.  I believe in celebrating every little bit of good news that comes our way, especially when dealing with the dreaded C. Nope, I’m not opening champagne at this early hour, before even getting my little darlings out of bed, preparing their breakfasts, making their lunches and seeing them off to school. Thought about it, but resisted. I’ve learned the hard way that bad things happen to good people, and to counteract that hard truth by celebrating all the good things that come along. Sometimes with champagne, but sometimes not.

It’s easy to get caught up in all the bad things about cancer. And believe you me, there are many, many bad things. Watching my sweet, vivacious, and much-beloved mama be eaten alive, literally, by uterine cancer was horrific. Knowing that I would have to live the rest of my life without hearing her big belly laugh, without her all-knowing guidance in raising my own kids was b-a-d bad. Seeing her ravaged body become ever more frail day by day left me wondering how much worse could it possibly get. Because as bad as it is, there’s always more. My BFF Ed tried to tell me that. He knew, from watching his dad die of pancreatic cancer. I didn’t want to believe him, and childishly clung to the idea that it was as bad as it could possibly be. But it wasn’t, and no matter how hard one “fights,” once cancer gains a stronghold, it’s devastating. No matter how much one wants to win the “battle,” there’s no guarantee.

If anyone on this Earth deserved to win her “battle” it was my sweet mama. Her own mama died when she was 13, leaving her to raise her younger sister, who my mama had to work hard to forgive for usurping her “I’m the baby” spot in the family line-up. They lived on a farm and life was hard. She was the only one of her 4 siblings to graduate from college, and she did it in 3 years. 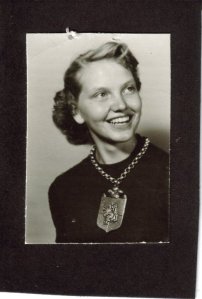 She was president of her sorority, which is how she scored this fetching necklace, and I’m sure she bossed her sorority sisters into next week. Determined to make her mark in the world, she became a teacher, and did it well. She married into a tight-knit Greek family who didn’t necessarily welcome “foreigners,” but she won them over. Every last one of them. Even the stubborn, crotchety old ones. She raised two kids in a most-loving and uber-secure environment. Everything she did, she did it well and with such love & warmth that people were drawn to her. She made this world a better place.

Yet, after a multi-year, multi-stage “battle,” cancer claimed her as its own. Not fair. Not by a long shot. But fairness has nothing to do with winning the “battle” against cancer. So much of it is luck and circumstance. So much of it is out of our control. That’s a tough pill to swallow for a Type A bossypants like me.

And that’s exactly why I live now.

The past is gone, and no matter how hard you may try, you ain’t gettin it back. You can’t change it. The future? Good luck with that one. My theory is you gotta work hard, bear down, be the person you most want to be, and hope for the best. Hope that you’ll avoid the evil lottery that decides who will be stricken with cancer. Keep on living a good life and doing all the right things (antioxidants, splurges in moderation, wholesome foods, regular check-ups and exercise, blah blah blah) but don’t for one second expect those things to earn you a free pass. Because cancer strikes no matter what.

So I live now.