Just had a major blast from the past — no, I wasn’t listening to the best of the 80s station on my satellite radio; some things are best left in the past.

I was driving down the street, minding my own business, when I saw this:

Yes, I pulled over to take pictures. If I’d had more time, I would have accosted the driver and told him my story. That guy lucked out today. Talk about dodging a bullet.

Don’t know Tom’s? Let me tell you about it. Not the shoes, either; the snacks.

When I was a kid, my Uncle Wilford drove a Tom’s truck. He was my mom’s older brother, and I adored him. Some jackass drunk driver blew through a stop sign going 105 mph on his way to a Tejano beer fest and killed him a few summers ago.

But the Tom’s live on.

Uncle Wilford was sweet and generous and mild-mannered. My mom used to say that the only thing she could find wrong with him was that he was a Yellow-Dog democrat (not that there’s anything wrong with that). She loved her brother despite their differing political views.

Occasionally Uncle Wilford would be working near us, even though he lived an hour and a half away. I have no idea why he drove his Tom’s truck our way; it never occurred to me to ask. I was just happy to see him. And his truck.

See, Uncle Wilford would park his Tom’s truck in our driveway, open up the back doors, and let all the neighborhood kids climb in and eat to their hearts’ content. I always got to go first, of course, and I always chose a bag of Hot Fries. In my day, the bag had a picture of Andy Capp on them. Apparently this is what they look like now. 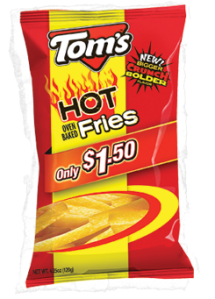 Tom’s had a much bigger product line back in the day, with not just chips but candy, too. My mom was a bit of a stickler when it came to junk food, being the queen of all things homemade, so we didn’t have a lot of crunchy, salty snacks that came out of a bag. Nowadays, with the prevalence of snack foods, this seems weird but it was how I was raised, and it made it that much more special to have free reign in the back of a snack-foods truck.

This is what the back of the truck looks like now:

Maybe my  memory is faulty, but it seems like there were a lot fewer boxes back then. I don’t recall Uncle Wilford every having to open a box to let my friends and me get our mitts on the goods. As I remember, the snacks were neatly organized but not boxed up; ready for the taking, as a snack should be.

Imagine the scene with a dozen or so kids turned loose in the back of a truck full of snacks and being told “Have at it.” I can remember some kids seeing that truck pull onto our street and running full-speed to our house. Barefoot and breathless, and ready for a snack.

Here’s what’s funny: I guess none of the kids bothered to learn my uncle’s name, and they called him “Uncle Tom.” Or maybe they knew his name but conflated him with the Tom’s snacks. (That’s one of the many things I wish I could ask my mom about today — how sweet it would be to have seen the Tom’s truck today, and dialed my mom right up to say, remember when we were kids, and Uncle Wilford parked his Tom’s truck in the driveway, and all the kids called him Uncle Tom?)

Of course at the time, none of us kids knew of the Harriet Beecher Stowe novel Uncle Tom’s Cabin. I bet my mom and my uncle snickered behind their hands when they heard the innocent children’s voices hollering, “UNCLE TOM IS HERE!!” I know I would be.