← The best photo
Living my life →

Race for the Cure, Houston style

My fair city hosts the largest Race for the Cure in the country. Yep, that’s right — everything’s bigger in Texas!! Today’s race was pretty great. They say a picture is worth 1,000 words, so I will simply let the photos speak for themselves.

Pink porta-potties, of course. (My germophobe self did not use them!)

The best hat award goes to this guy….

The Houston Fire Department was out in full force, walking with these cute shirts.

These 4 young boys had boobies on their minds! Their shirts were in loving memory of a woman named Kathy. I’m sure she’s very proud of these guys.

There were lots of signs in celebration of or in memory of someone. Very powerful. 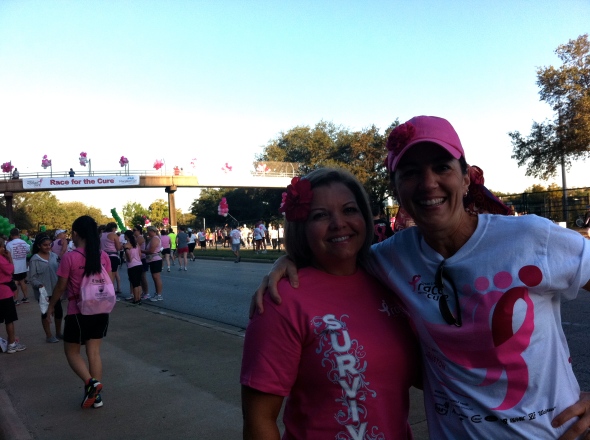 Christy & me at the start of the race. Ready to pound the pavement! 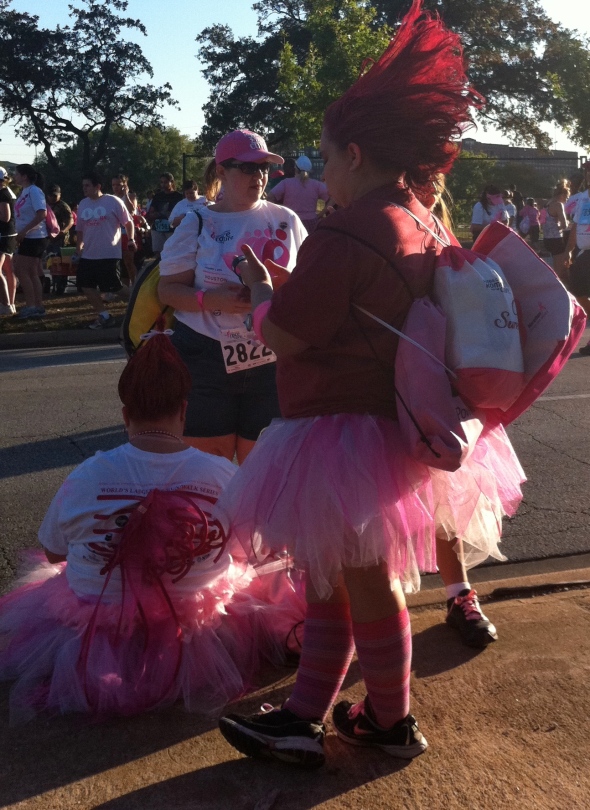 There were several groups sporting mohawks, but this girl won for best hair.

One of the many groups at the race. This one was in honor of Moni, who I’m assuming is a grandma.

One of several little boys in a pink cape. So sweet! 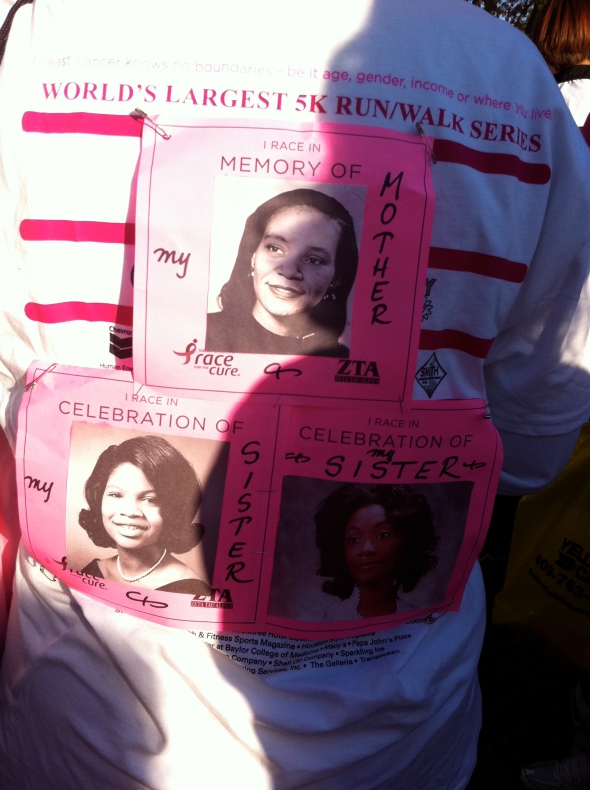 This gal had the best photos for her “In memory of” and “In celebration of” signs. The photo of her mama made me a bit misty-eyed. And the idea of her gene pool made me fear for her. 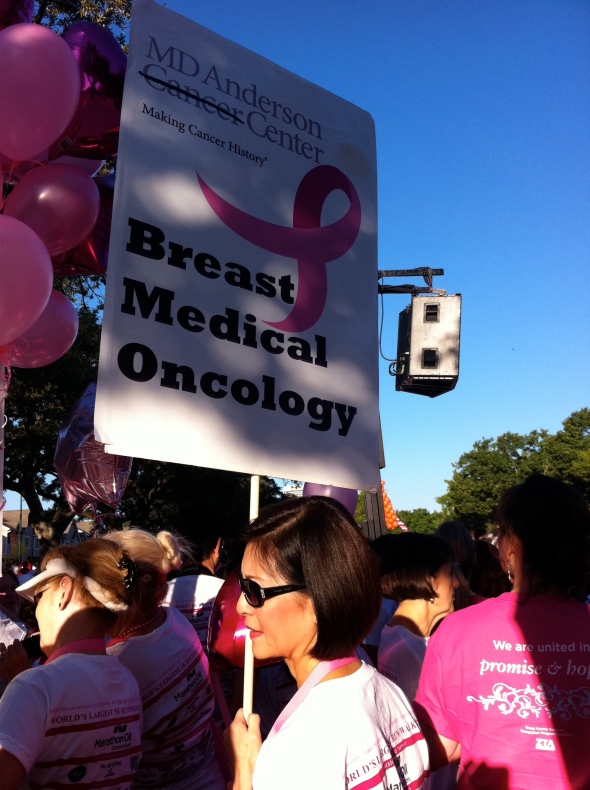 I’m guessing this group raised a lot of money for the cause.

This t-shirt was so sweet and so heart-felt, and a great example of simplicity at its best: no neon colors, no bling, just a powerful message that brought me up short.

This guy was not walking next to a women, which  made me wonder if she was too sick to race. Hopefully she was off in a group of survivor sisters, laughing and celebrating.

One of the many bald girls rocking the race.

Of course this one made me want to bawl. 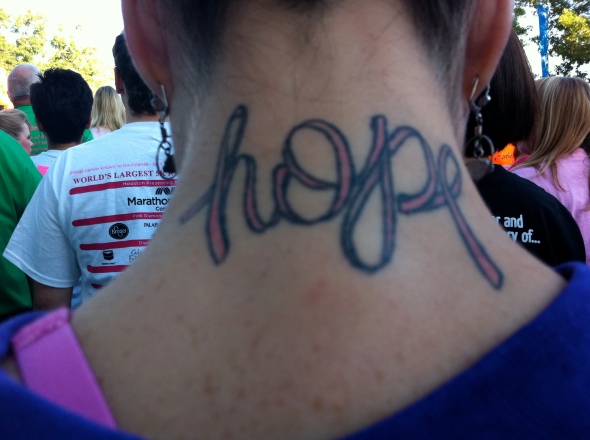 Best tattoo award goes to this chick. Love the font and the message.

There were lots of long lists — too many, really. I loved this one that mentioned the best 4th grade teacher. How cute is that? 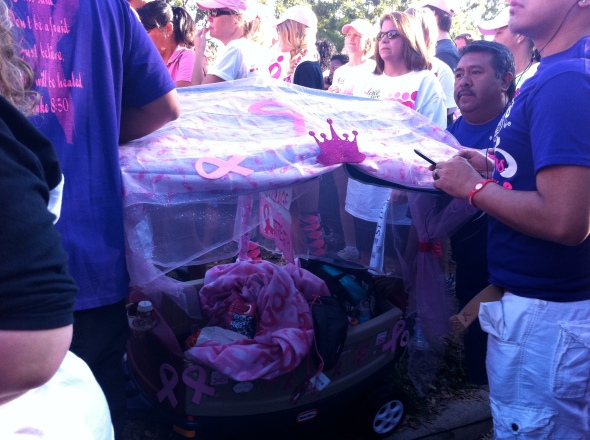 One of the many fancy carriages we saw. By the end of the race, I wanted to ride in one!

Supergirl cape — I want one! 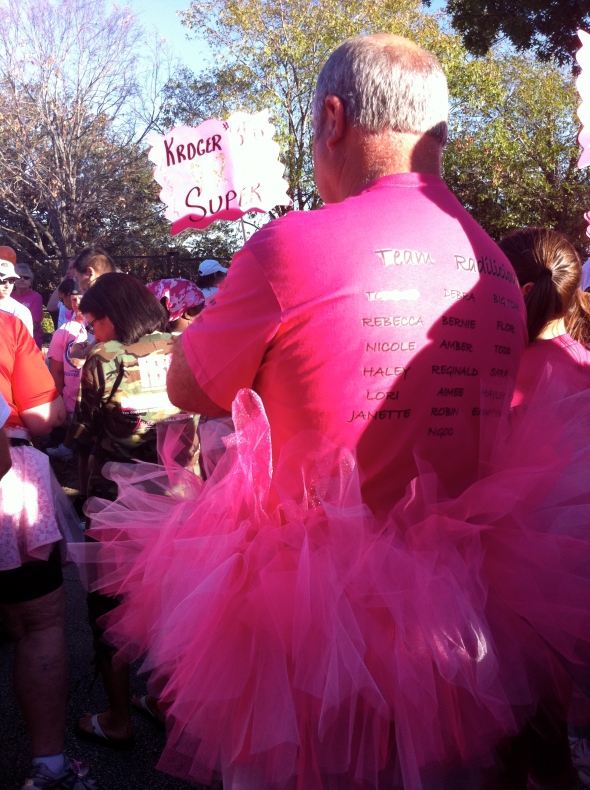 There were lots of guys in pink, but this one in a tutu was one of my favorites. 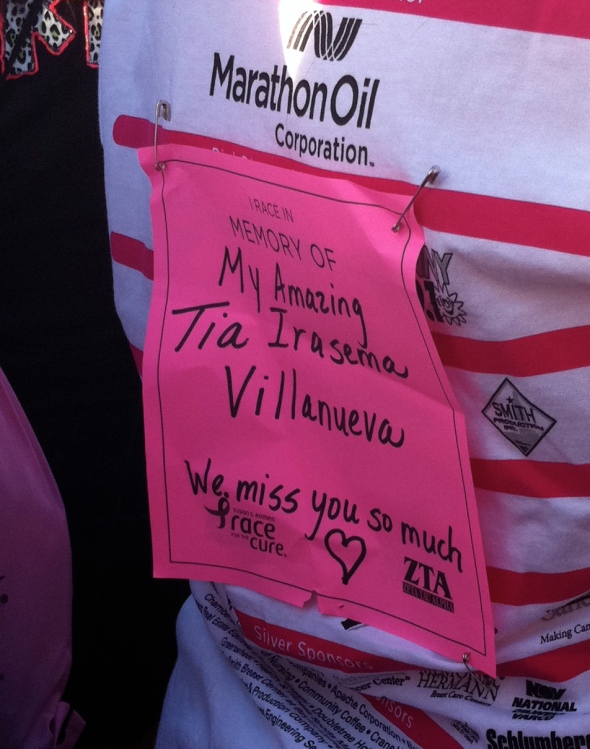 The “We miss you so much” part of her sign got me, big time. 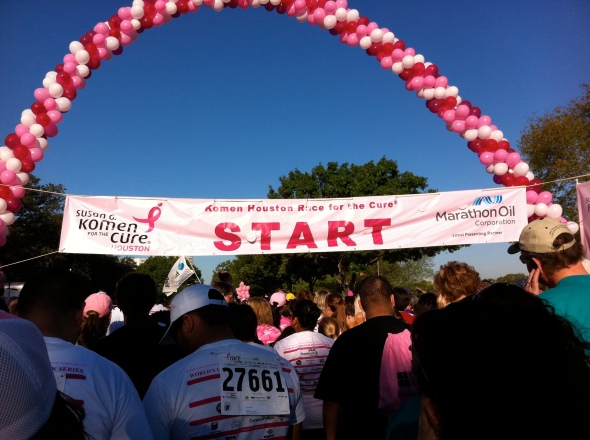 The balloon archway at the starting line was awesome! Not so great for the environment, but cool.

“Walking to defeat breast cancer” shirts had a beautiful look. Love the font and the flowers. 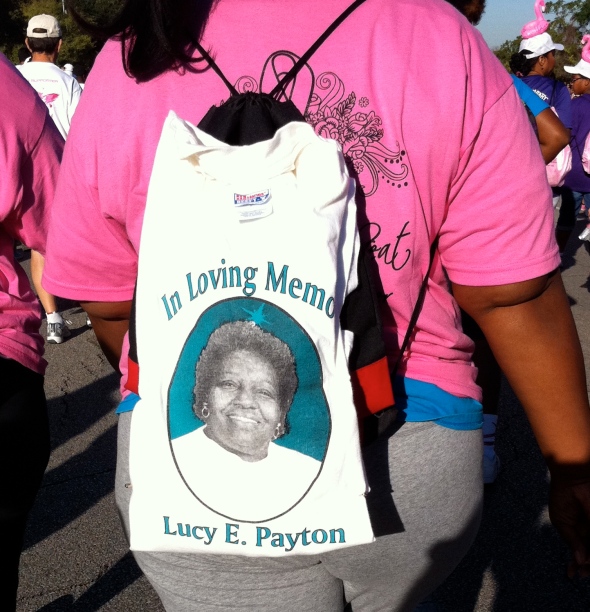 Lucy E. Payton, I hope you knew how much you are loved! I’m sure your family  misses that sweet smile every single day.

Another long list. Love the “me!” at the end.

These shirts in memory of Tina Cullum were sweet. I really like the butterfly, and these shirts prove that you don’t have to have pink to get your point across. 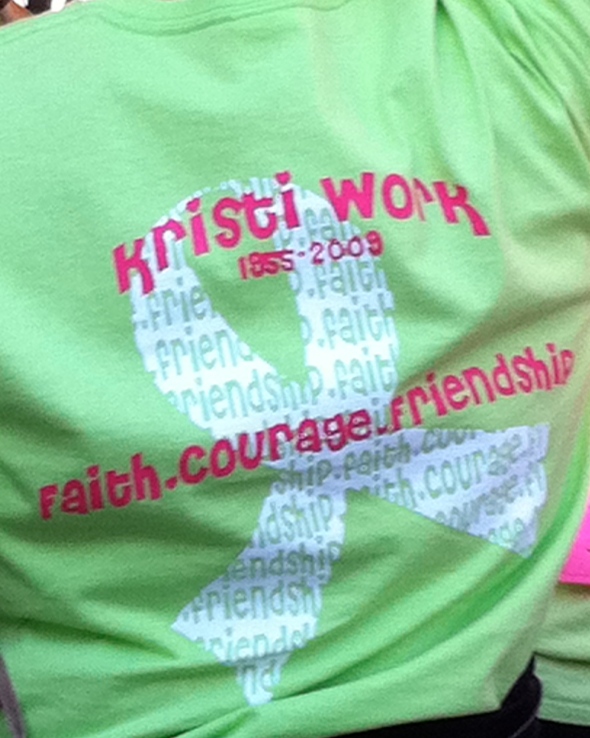 Guess who was pushing this stroller? Nana! In her survivor shirt. Go Nana! 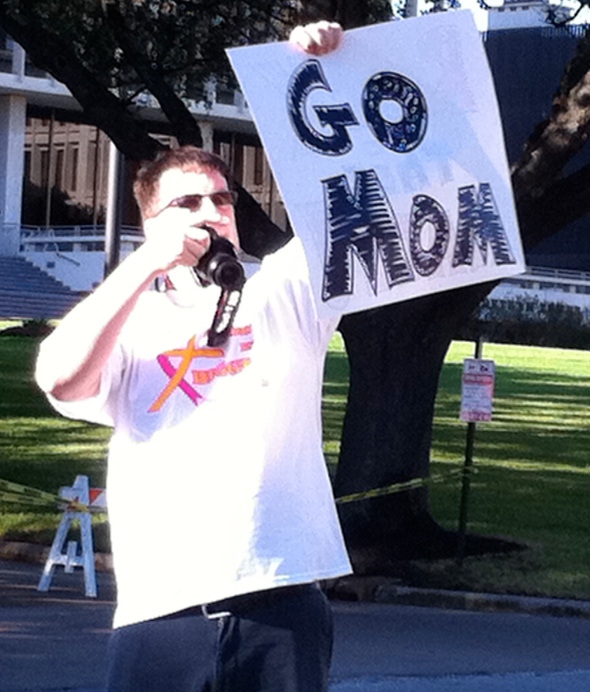 I’m assuming this guy’s mom was racing. He was trying to take my picture as I tried to take his — I won! 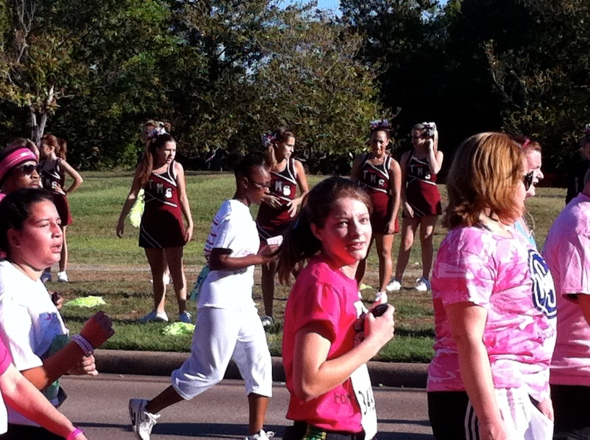 Cheerleaders had special cheers for us racers today.

I absolutely LOVE this shirt. Can you imagine a world of stage none??? 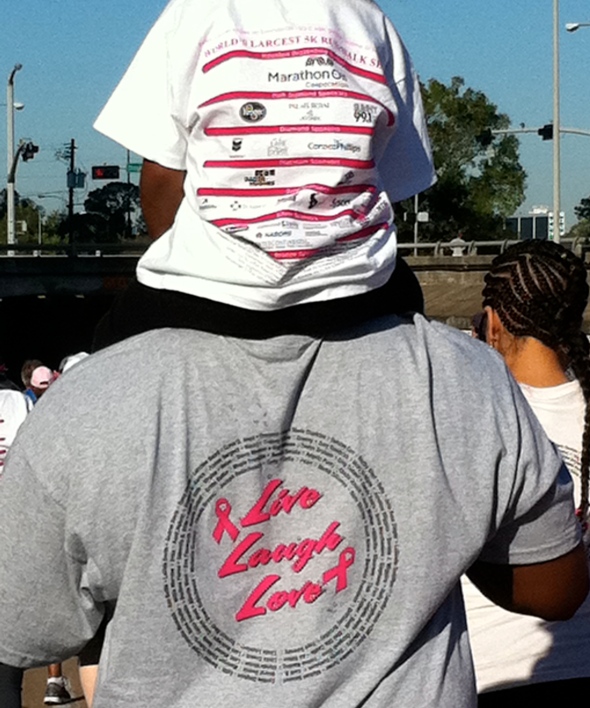 This darling little girl was riding on her dad’s shoulders. I did not envy him. 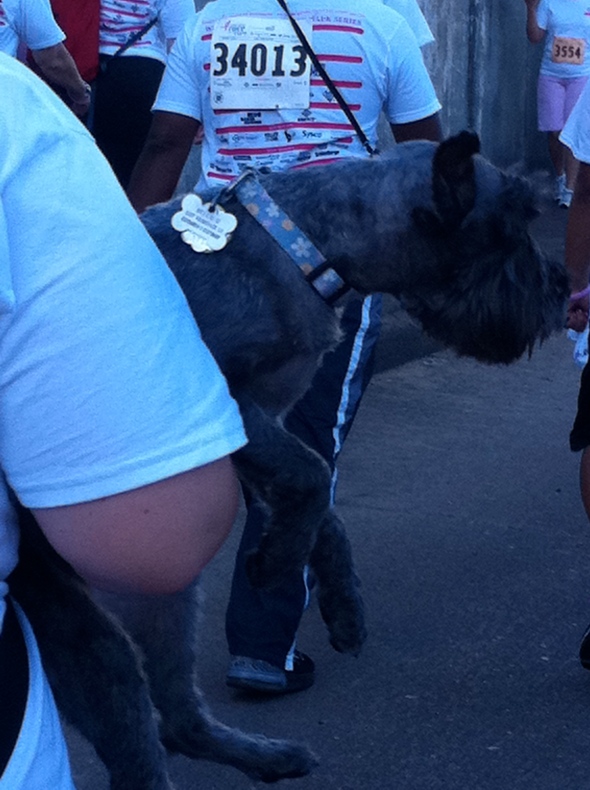 The rules said no dogs allowed, but this guy must have slipped through.

She didn’t have any hair, but she did have tissue expanders in preparation for implants! 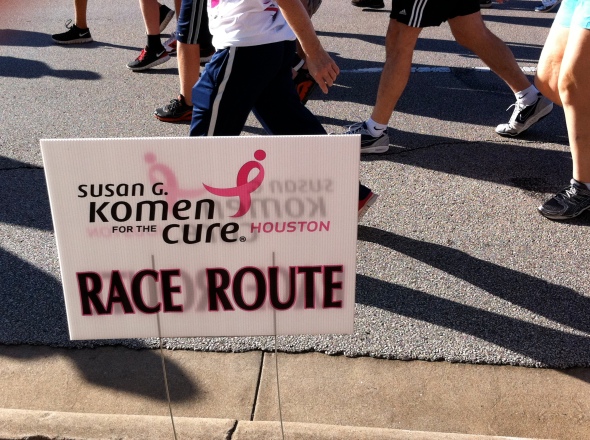 Race route sign. The logistics and details of pulling this huge race off are staggering.

Her shirt reminded us to never, ever give up hope. 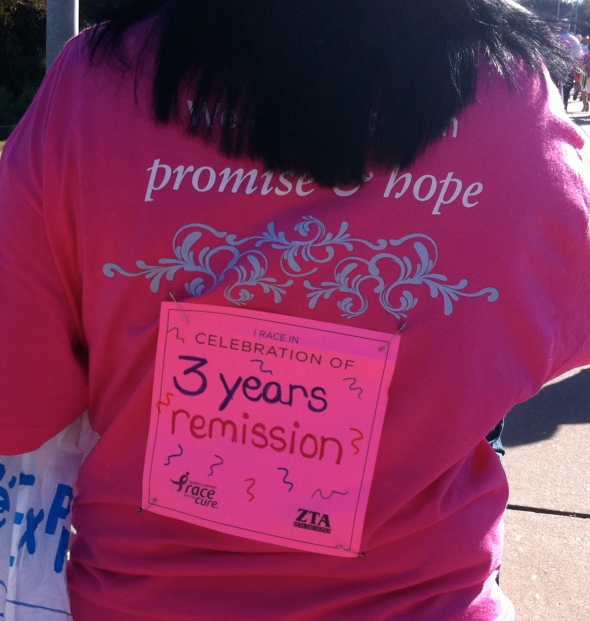 Cutest bra, and it’s on a dude!

One of many shirts about boobs. Not sure what her business is, but she’s in it.

This wagon was all decked out, but no rider in sight. 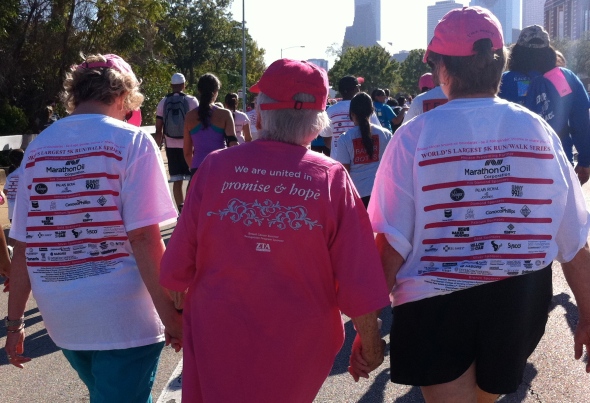 How utterly sweet is this?

He’s got her back.

Another young boy in a pink cape — fantastic! 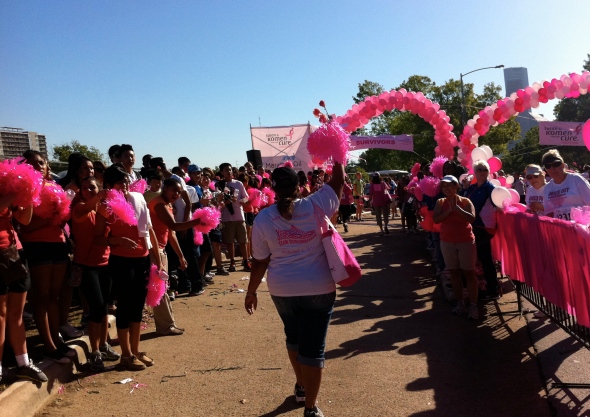 Getting close to the finish line, which was crowded with supporters, whooping & hollering!

The downside of having the biggest race in the country.

The best part of the race — finishing in the SURVIVORS lane!

12 Comments on “Race for the Cure, Houston style”