← BC claims a two-fer
I Stand with Planned Parenthood →

Komen, why’d ya have to lie to me? 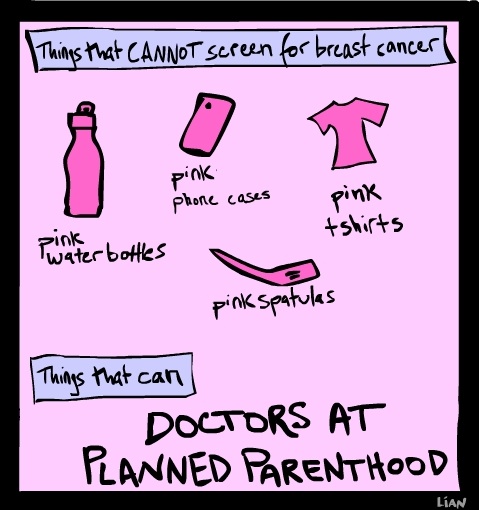 thanks, Katie @ Uneasy Pink for the laugh!

There might have been a chance — a teensy, weensy chance — that you could have come out of this firestorm with a speck of dignity and integrity left, but you blew it. Big time.

Well, the good thing about Komen’s decision to kick Planned Parenthood to the curb — and to bold-faced lie about the reasons behind that decision — is that we bloggers will have fodder for days. Thanks, Komen. Thanks for being sneaky and deceitful and for showing your true colors. If I weren’t so sad by the fracas and the potential to help so many that has been so foolishly pissed away, I might be grateful. But I’m not grateful. Even though it’s nice to have a definitive answer on this organization’s true motive, and it’s nice to know for sure that Komen is not what it claims to be, I’m not grateful. I’m mad. And anyone who knows me will tell you that once I get mad, I stay mad. For a long time.

As I mentioned in yesterday’s post, I sure wish Komen would have just been honest about its motivations to drop PP in the grease. The fact that Komen continues to hide behind the travesty of an ongoing “investigation” instead of coming clean about its reason for breaking with PP sickens me. Komen founder and chief executive Nancy Brinker continued the lie in a news conference yesterday, saying that SGK’s decision to pull its funds from PP has nothing to do with politics or abortion.

Raise your hand if you believe one word that comes out of this woman’s mouth.

Here’s the thing — I don’t care if Komen wants to pull its funds from PP. I disagree with the wisdom of that decision, but Komen certainly has the right to do what it wants with its money. But don’t lie to me.

For Brinker, and by extension SGK, to continue to say that the decision to pull out of PP resulted from changes to the grant-making procedure makes me sick. She said in her press conference, “We think this is the right thing to do from a stewardship standpoint.”

Maybe Brinker thinks the general public is too dumb to see right through this. Sorry, Brinker, but I’m not stalled by your rhetoric, by your multi-syllabic alliteration.

I’m also onto the fact that Brinker’s assertion directly conflicts with SGK board member John Raffaelli, who spoke about this ugly issue to The New York Times and said, and I quote, that SGK made changes to that grant-making policy specifically to end its relationship with Planned Parenthood. From The Times:

“Raffaelli said that Komen had become increasingly worried that an investigation of Planned Parenthood by Representative Cliff Stearns, Republican of Florida, would damage Komen’s credibility with donors.”

Guess what, Nancy Brinker: you didn’t need to worry one bit about Stearns’s trumped-up, bogus witch-hunt of an “investigation” damaging Komen’s credibility with donors. YOU DID THAT ALL BY YOURSELF.

Really, wouldn’t it have been easier to come clean? To be honest? To tell the truth, which is that Brinker and SGK no longer wanted a business relationship with PP because of a difference in political views? To that end, can someone please explain to me how not one word has been uttered by SGK about its 5-year, $7.5 million research grant to Penn State’s Milton S. Hershey Medical Center? Last I heard, the sexual-assault scandal at Penn State involving Scumbag of the Year Jerry Sandusky involved a federal investigation of the university. How can 40 counts of sexual abuse over a 15-year period be ok, while a mere 3 percent of PP’s services being dedicated to terminating unwanted pregnancy is worthy of an epic break-up? The hypocrisy is staggering.

Also staggering is news that local Komen affiliates were not told of the break with PP. Betsy Kamin, president of Susan G. Komen for the Cure Houston, told The Houston Chronicle “The affiliates were not made aware of it [the decision] in advance, so it was shocking to us.”

The local Planned Parenthood president and CEO Peter Durkin had something to say about the decision, too: “As a leading health care provider in our community, Planned Parenthood is trusted to help women identify breast cancer early. We are deeply alarmed that the Susan G. Komen for the Cure Foundation appears to have succumbed to political pressure from a vocal minority.” He went on to say that the Gulf Coast Planned Parenthood was “deeply disappointed” with Komen’s decision.

Mollie Williams, SGK’s top health official, resigned from SGK over this. Williams, the director of community health programs for SGK and in charge of deciding how to allocate $93 million in Komen grants to more than 2,000 community-health organizations said, “I have dedicated my career to fighting for the rights of the marginalized and underserved,” she wrote. “And I believe it would be a mistake for any organization to bow to political pressure and compromise its mission.” So the person in charge of handing out Komen’s money–who definitively knows who is worthy of receiving those funds–disagrees strongly enough with the decision to end the relationship with PP. Not just that, she disagrees strongly enough to quit her job. Wow.

According to The New York Times, Dr Kathy Plesser, a New York City radiologist and member of Komen’s scientific advisory board, said she would resign if Komen did not reverse its decision. “I strongly believe women need access to care, particularly underserved women,” Dr Plesser said. “My understanding is that by eliminating this funding, it will jeopardize the women served by Planned Parenthood in terms of breast care.” Dr Plesser went on to say, “Komen is a wonderful organization and does tremendous things for women, but this is straying from their mission, and it’s sad.”

All 7 of California’s SGK affiliates are “strongly opposed” to the decision, and the top official for SGK California joined Williams in resigning from the organization. Those affiliates are working hard to overturn Komen’s decision. So far, 26 U.S. Senators have called on SGK to reconsider its decision, saying that “it would be tragic if any woman . . . lost access to these potentially lifesaving services because of a politically motivated attack.” I suspect this is only the beginning.

The Race for the Cure, which is SGK’s most iconic fundraiser, is on the endangered species list. The very first Race for the Cure was in 1983 in Dallas with 800 participants. Last year, there were 130 races worldwide with 1.6 million participants, according to Komen’s website.

The Philadelphia Inquirer interviewed Kivi Leroux Miller, a North Carolina-based consultant on nonprofit marketing strategies, who said Komen was “naive” to think it could distance itself from the abortion debate while doing the very thing that antiabortion Senate Republicans have been trying to do – defund Planned Parenthood. Naive and egotistical, IMHO.

“Komen has forever changed the way people will look at them,” Miller said. “Until now, they have successfully stayed out of controversial areas of women’s health care. They kept the message simple: save lives, race for the cure, pink ribbons. They’ve forever muddied that now. They’ve made it hard for women to figure out what they’re about – and that makes it harder to raise money.”

I know one Race for the Cure participant who won’t be forking out $40 to enter Houston’s 2012 race. That makes me sad, because last year’s race was a lot of fun. And if any of my crew plans to participate in an upcoming Race for the Cure (should there be any), don’t bother writing my name on the “In Celebration Of” pink sheet. Thanks but no thanks. I don’t need Komen to help me celebrate my survivorhood. 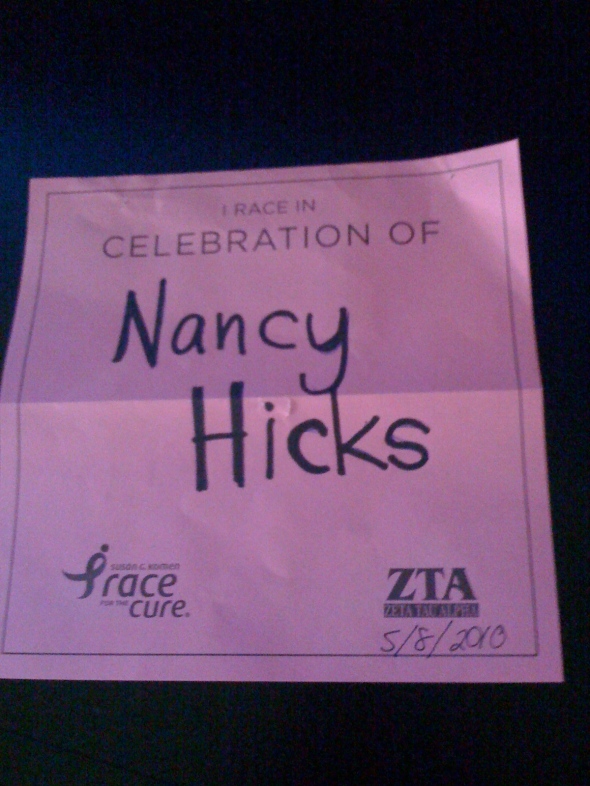 Komen’s decision has taken center stage — in the news, on the Web, in the blog-o-sphere, and in the twitterverse. It was front-page news in my newspaper today, and probably in those of every other major city. The Seattle Times features a great story today about a formerly dedicated Komen fundraiser, Celeste McDonell. A Seattle lawyer and breast cancer survivor, McDonell labels herself as a “longtime, passionate Komen advocate.” She’s raised serious funds for the cause, too, by spearheading a “Row for the Cure” event that in 10 years has raised more than half a million dollars for her local Komen affiliate. Last year alone she raised $84,000 in her event. McDonell’s law firm had just committed to sponsor the next “Row” fundraiser, but has put that on hold, she said. Instead, a commitment has been made to Planned Parenthood. “Our firm is a strong believer in social justice and thought this was a move that needed to be made,” McDonell said.

McDonell’s story is but one in a crowded field of former supporters who are now protesting Komen’s decision.

The American Association of University Women has cancelled plans to offer a Komen Race for the Cure as one of the activities at its upcoming National Conference for College Women Student Leaders (NCCWSL). Stating that the AAUW is “disappointed with the Susan G. Komen Foundation’s decision to strip funding for cancer screenings from Planned Parenthood,” the AAUW will not offer the Susan G. Komen Global Race for the Cure as a community service opportunity at its NCCWSL. For 27 years, college women from across the nation have attended the NCCWSL, but this year there will be no Race for the Cure.

You sure stepped in it this time.