← Another BC casualty
What I know for sure →

I wasn’t planning on writing about Giuliana Rancic’s breast cancer diagnosis in October or her decision to have a double lumpectomy or her announcement  that her double lumpectomy has morphed into a double mastectomy. Much has been written about it, and she’s done the talk-show circuit, and I didn’t feel the need to comment on the latest celeb to begin a cancer “journey.” However, the more I read about her story, the more compelled I am to comment.

First, when her cover issue of People magazine hit the newsstands, it nearly caused me to have a heart attack. I was mindlessly unloading my loot from my shopping cart and putting it on the conveyor belt when I caught a glimpse of this: 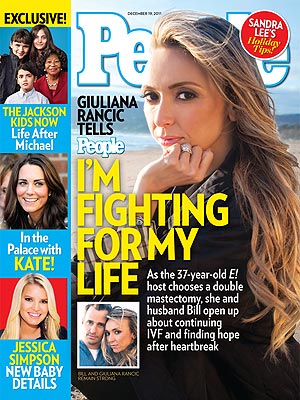 I didn’t notice the photo or her name, but was drawn in by the bold yellow headline and wondered, who’s that and what’s she got that is serious enough that she has to fight for her life??? Imagine my shock when I read the fine print and realized that it’s Giuliana Rancic and she’s got what I had — breast cancer. After the shock wore off, I thought I’d better see how serious her diagnosis is; after all, if she’s fighting for her life, it must be bad. I’m thinking stage 4 with mets everywhere.

The article in People, titled “The Fight of My Life,” speaks of her “devastating cancer diagnosis.” I’m thinking this is really bad.

As I read on, though, I learned that her BC was caught early and had not spread.

So does this mean that early-stage, non-metastatic BC qualifies one to be deemed “fighting for one’s life”? If that’s the case, what does that mean for women whose BC is not early stage and has spread?

This kind of overwrought journalism really bugs me. I know that People has to sell mags, but good grief, how about a little truth in advertising? The cover story of  “I’M FIGHTING FOR MY LIFE” in big, bold letters nearly caused me to stroke out, and left me thinking I really underplayed my BC story. My cancer was in both breasts, not just one, and I never declared that I was fighting for my life. I’m thinking I seriously mishandled this.

I’m certainly not one to kick a sister when she’s down. That’s not my intent at all. I wish her the best; I truly do. Cancer is a terrible thing, no matter what age or what stage one is when diagnosed, and I certainly don’t mean to give Rancic grief — she’s enduring enough of that as is. However, I do wonder about some of the comments she’s made. I was hoping they were taken out of context, but ….

She said that the double lumpectomy didn’t get all the cancer so she was moving forward with a bilateral mastectomy, and I totally support her saying that deciding to have a mastectomy “was not an easy decision but it was the best decision for me.” Agreed. But when she went on to say  “Not only can it [mastectomy] save your life, but you can come out feeling healthier and with a positive self-image”

Ladies, raise your hand if your bilateral mastectomy left you feeling healthier and with a positive self-image.

Come on, show of hands.

Maybe I’m the odd girl out, but the process of lopping off my breasts certainly didn’t make me feel that way, and 18 months later, it still hasn’t. I’ve talked to more than a few BC gals, and never once has the topic of feeling healthier or having a better self-image come up. Not once.

On The Wendy Williams Show the other day, Rancic spoke openly about her surgery and how she thinks it will affect her: “Listen, I love my girls, but I’m gonna feel more like a woman when this is all done.”

“I’ll be able to say that I survived something major and it’s made me stronger. I will be a better woman for it.”

Oh boy. More like a woman and a better woman. Yikes.

I hope she’s not setting herself up for a very big, very traumatic fall.

Rancic went on to say that “scars are beautiful. I think scars tell a story.”

Yep, there’s a story there all right. Millions of women can attest to that. There is most definitely a story there. Hopefully not a horror story.

I wonder if she’s seen any images from The SCAR Project. I was blown away by photographer David Jay’s shots the first time I saw them, and receiving The SCAR Project book is one of the best gifts ever (thank you, Trevor). The women are beautiful, and their strength and kick-assed-ness is beautiful.  The scars, not so much. 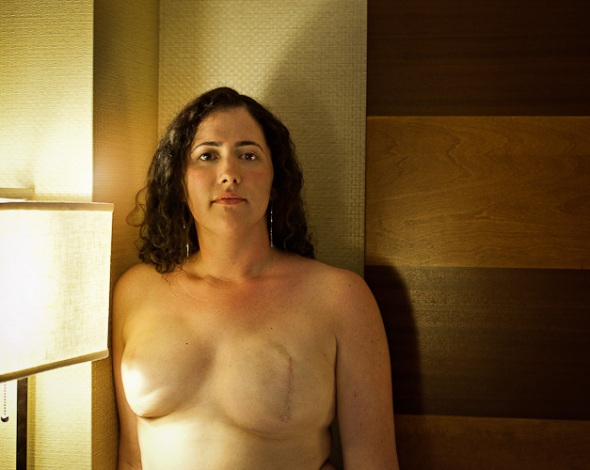 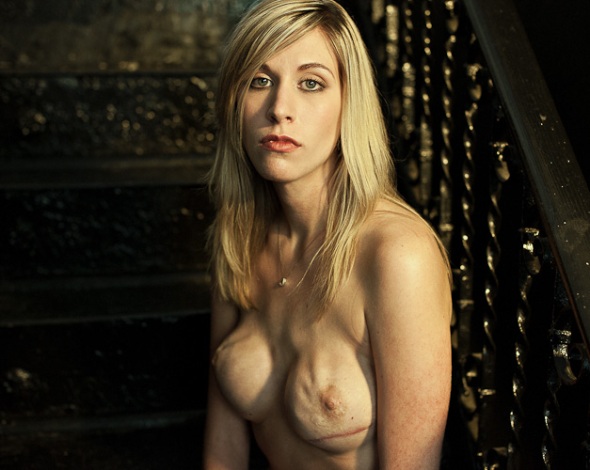 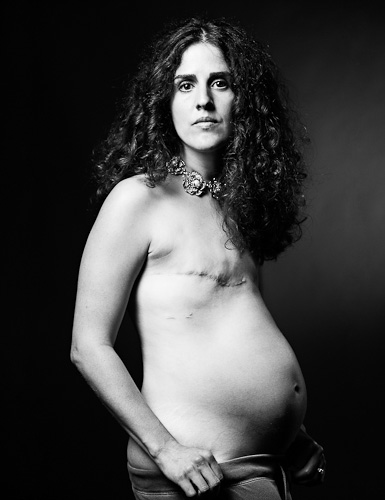 Giuliana Rancic speculated of her breasts after reconstruction: “They might come out looking even hotter. You gotta have fun with this. We find the humor in everything. Bill helped pick ’em out. I’m like, ‘Bill, that big? Really?'”

I’m gonna have to linger on that idea for a minute.

And when I’m done, I will contemplate the damage that occurs when people say things that imply that facing breast cancer is a tidy event that requires surgery and treatment then fast-forward on to the happily ever after. While the happily ever after certainly can, and does, happen, I think it’s misleading to say that BC is something you deal with and move on. The idea that after cancer comes transcendence is flawed. The idea that all you have to do is wrap a big pink ribbon around a cancer battle is flawed. The idea that everyone comes away from breast cancer a better, stronger person is flawed. It’s not that easy, it’s certainly not pretty, and it doesn’t always result in the kind of change you would consider positive.

In speaking of Rancic’s mastectomy, her husband Bill said, “Our goal is to be done with this by Christmastime and not look back. We’re taking the rear view mirror off the car and we’re not looking back, because we’re going to be done.” Well, considering she had the surgery two days ago, and is still in the hospital, I hope she’s “done” by Christmastime. It’s good to have goals.

Maybe the whole cancer thing is still too fresh for me, too raw, but the idea of not looking back is weird and foreign and borderline incomprehensible. Maybe there’s a pair of magic “don’t look back” glasses that gets passed out upon diagnosis, and I missed out on that. I can see how that might happen as I’m always in a hurry and might have scooted out of Dr D’s office before anyone had a chance to give me the “don’t look back” glasses. Or perhaps I was supposed to get them from my oncologist, but was so freaked out by the fact that I have an oncologist that I ran out of his office before I got the magic glasses. Maybe Giuliana got her glasses in advance; one of the perks of being a celeb and having cancer. Personally, I don’t know how one can experience a cancer “journey” and not look back. I hope it works out for her.

Giuliana is definitely on the fast-track. She says, “I hope for a full recovery by New Year’s Eve. We’re planning to be in Times Square!”

If any of y’all are going to be in Times Square for New Year’s Eve, look out for Giuliana. And be sure you don’t bump into her. Those mastectomy scars and JP drain holes take a while to heal.