I’ll say right here & now that the scare had nothing to do with cancer. There, now y’all can breathe. 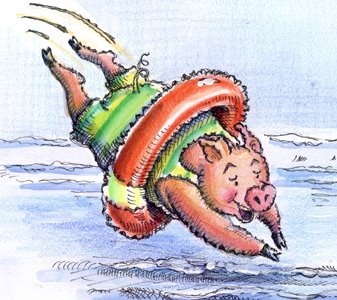 Luckily, I was across the pool from her and was able to get to her in a matter of seconds, although it seemed like it took forever. I was holding a book in my hand that doesn’t belong to me, and apparently I was thinking about not getting it wet because I held it above my head as I swam over to the submerged piggie. I don’t remember thinking about the book, but after the calamity I noticed it was safe and dry on the edge of the hot tub, between where I started my rescue attempt and where the distressed piggie was. Funny the way we react in the midst of chaos.

Our little piggie is a curious girl, and she was sniffing a pool float that had recently been vacated by me. It has floated up against the edge of the pool in the deep end, and she must have leaned toward it to investigate it. I had my back turned across the pool and didn’t see her reach out toward the float, but I heard a small splash and saw her sinking fast. She was at least a foot underwater before she started paddling madly to get herself to the surface. She reached the surface just before I reached her, and I’m happy to report that she can indeed swim, but because she’s built rather low to the ground, I think she’d have a hard time getting herself out of the pool without some help. I shudder to think of her swimming aimlessly in the deep end, unable to make purchase and unknowing about the safety of swimming to the shallow end and resting upon the tanning deck.

So this time, we were lucky. She didn’t have to swim aimlessly and I reached her quickly. We were both quite breathless with fear, and she recovered much more quickly than I. As soon as I grabbed her, she relaxed but I still had to swim to the shallow end while holding her so I could get her out of the pool. Upon having her four feet once again firmly planted on solid ground, she gave a big shake, scratched one of her ears with a hind foot, and sashayed over to a sunny spot to dry off. It took me a bit longer to settle down.

Lately I’ve been thinking about resilience, and how ironic it is that going through something life-altering and scary, like a cancer diagnosis, would seem to make one more resilient. Before I’d looked tragedy and hardship in the eye, I would have thought that the harder the times, the stronger the person. Maybe that is true for some, but for me it seems to be just the opposite: going through hard times has made me less tough. I’m fearful now when before I was brave. I’m full of anxiety when in the past, I was not worried. I’m would up now, imagining the worst-case scenario before it even has a chance to manifest; before, I wouldn’t even have thought to go there.

Martin Luther Kind once said, “The ultimate measure of a man is not where he stands in moments of comfort and convenience, but where he stands in times of challenge and controversy.” That’s food for thought, and if anyone should know about adversity and resilience, it would be Dr King. In the abstract, I would wholeheartedly agree with him. In reality, however, my research seems to prove the opposite: the more crap I endure, the worse for wear I become. And that old axiom about “whatever doesn’t kill you makes you stronger” — I’m starting to have serious doubts about that one, too. Long after our little piggie was safe and dry, my brain kept replaying the scene in the pool. A continuous loop of Piper underwater was stuck on “rewind” in my mind.

According to the experts, I’m wrong. A study on adversity and resilience done by Mark D Seery, PhD, at the University of Buffalo SUNY, indicates that people who’ve endured moderate trauma are better off than people who lead a charmed life.

Dr Seery says that “while going through many experiences like assault, hurricanes, and bereavement can be psychologically damaging, small amounts of trauma may help people develop resilience.” He likens moderate trauma’s effect on our resilience to exercise’s effects on our muscles: small tears grow back stronger than before. Perhaps it’s because going through hard times forces us to become better at coping with difficulty. Nobody said life was easy, and now Dr Seery says that’s a good thing. I’m going to take his word for it, since he is an expert. I’m going to choose to believe that I’m becoming more resilient with each hit, despite the fact that it seems like the more adversity I face, the more broken down I become.

One of my favorite descriptions of resilience is in W.P. Kinsella’s short story The Thrill of the Grass. Kinsella writes beautifully about his love of baseball (in his case, the Chicago Cubs). While he’s best known for Shoeless Joe, the basis for the stellar movie “Field of Dreams,” one line in The Thrill of the Grass stands out. He refers to a character who had “fouled off the curves that life had thrown her.” I’m a sucker for a good baseball metaphor, and Kinsella knocked that one out of the park.

Fellow BC warrior Elizabeth Edwards knew a thing or two about resilience. In fact, she wrote a book called Resilience: The New Afterword. In it she writes that “when the wind blows rough, the tough adjust their sails.” Or, they fish their little piggies out of the pool.

14 Comments on “A little scare”