Pinktober is making me crazy…for realz

It’s not just an excuse to go postal or blow off some steam, it really is making me crazy. The prolific presence of Pinktober is making me nuts. I’m seeing red (of which pink is a derivative, I suppose). The other day, a woman in the grocery store was sporting one of the worst pink offenders, IMHO, the “Save the Tatas” shirt. I saw her and her offending shirt in the produce aisle and felt a sick feeling in my stomach. I was barely in the store and was already being thrust into the belly of the beast. Just walking in the store, I was accosted by a huge display of “awareness” crap — flower arrangements, helium-filled balloons, potholders, even pink-ribbon bedecked cakes, for cryin’ out loud. Sheesh.

Do those of us who have tangled with this damn disease really need to run the gauntlet of reminders of said disease just to get into the grocery store? Sheesh.

Maybe the display of pink junk that greeted me at the store set me up so that when I saw the “Save the Tatas” shirt, I was primed and ready for a tussle. 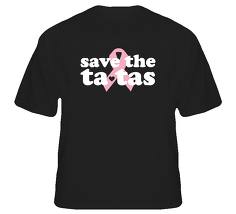 I tried to be respectful. I did. I entered into the conversation with every intention of getting her point of view. I’m curious, genuinely curious, as to why a grown woman would sport such a message across her chest. So I pointed to her shirt as our paths crossed by the giant pile of pumpkins (which thankfully had not been painted pink). I asked her if she’d had breast cancer. Just curious. She said no, she has not had breast cancer. Oh, so you know someone who has? I asked. No, but she bought the shirt to support breast cancer awareness.

The interrogation continued as I asked her if she was aware of how buying the shirt helps, and what, in her opinion, does “awareness” even mean? She didn’t really have an answer for that. Huh.

I pressed on, like a dog with a bone, and asked if she was aware of which charity received proceeds from the purchase of that shirt. Again, no answer. At this point, she was probably wondering how to contact security in the grocery store. I concluded our little chat by telling her that I have had breast cancer, and I do know many other women who have as well, and that those of us in the pink ribbon club don’t care for those shirts because some of us were put in the unpopular position, through no fault of our own, of not being able to “Save our Tatas,” and that seeing such messages serve as a stark and unwelcome reminder of that most unpleasant fact.

She said she’d never thought about that. She was not aware of that.

I bet she’s also not aware of the fact that once you lose your tatas, each and every glance downward or glimpse in a mirror is a smack in the face. That even after reconstruction — or multiple reconstructions — those tatas will never be the same. Some women end up with a version they like better. Some end up with a version that makes them sad each and every time they see that new, not-so-improved version.

She and I parted ways, me feeling marginally better for having unburdened myself, her probably feeling like she needed to go home and lie down. Hopefully she went home and threw that damned shirt in the garbage, where it belongs.

Then I hear that our local professional soccer team, the Houston Dynamo, is hosting an “awareness” event of their own tomorrow. The first 5,000 fans at the Breast Cancer Awareness Match will score a mini pink soccer ball. Sweet.

But this is how they choose to market the event. 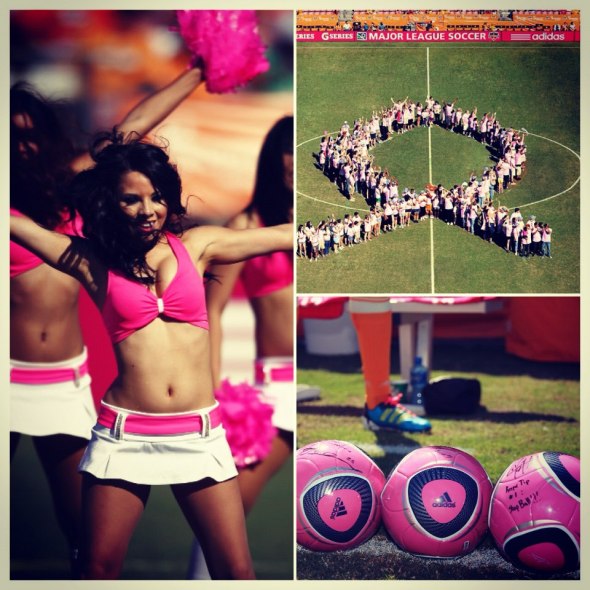 Tell me, please, anyone, what the scantily-clad cheerleader in the pink attire has to do with breast cancer? Or is that what it takes to get people to attend the event? Questions, people–I have questions!

I had to dig pretty hard to find any info on the actual event. While these images are splashed all over the web, details on what the event really is all about remain elusive. The Dynamo website shows a much less exciting image:

But when I clicked on the link to bobby boots breast cancer/Dynamo Charities, I got nowhere. The computer told me that the page I sought could not be found. Bummer. My next question: is the bobby boots breast cancer image above, with the philanthropic player (who I assume is Bobby) and the soccer-cleat-wearing pink ribbon, that much less effective than the perky cheerleader in her push-up bra? Do people really care less about this dreaded disease if it’s marketed without actual images of breasts?

I was still full of questions when I saw this on a car: 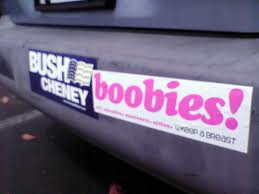 This time, I didn’t accost the person sporting the offending message because the light turned green. But I wanted to. I wanted to say, Can you imagine in your wildest dreams putting sticker on your car that says “balls! support testicular cancer research!” Or “ovaries! egg-makers or silent killers?” No, me neither. As the shirt says, It’s all about the boobies. 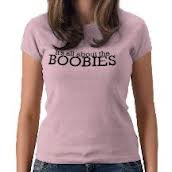 It certainly isn’t “all about the boobies” — it’s about a woman’s life, and how BC threatens and too often takes her life. I’m still waiting for an explanation of how any of this boobie culture makes any difference in the “fight” against breast cancer. If you see a guy wearing a shirt like this, does it enact any change whatsoever in the BC arena? 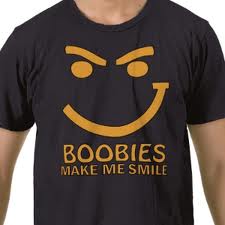 I wonder how he would feel if I wore a shirt saying “PROSTATES make me happy”? I can’t even find an image of such a shirt because guess what — it doesn’t exist! No, instead the prostate cancer “awareness” shirts look like this: 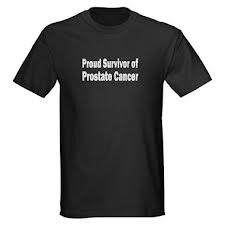 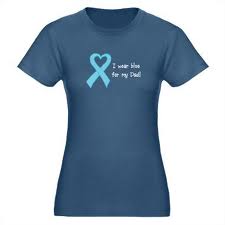 “I Wear Blue for My Dad” conveys a slightly different message than “Save Second Base.” It says the focus is on the person, not the body part. The take-away message here is that sexualizing a devastating disease does nothing for those who suffer from it.

Well, wait a sec — I take that back. Sexualizing a devastating disease does do something for those who suffer from it. It makes them feel bad. Really bad. It makes them mad. Really mad. It makes them want to accost random people in the grocery store or at the bank and set them straight. It makes them have to confront the fact that at this very moment, they may be crossing that bridge from “survivor” with NED to stage IV without a cure. I will never, ever forget the feeling of utter fear when the first oncologist I consulted said once a cancer comes back, no matter what stage it was upon original diagnosis, the recurrence sends you straight to stage IV and you’re considered incurable. Not that you’re going to die from it, as many stage IV cancers can be managed, but treatment is ongoing, as in, for the rest of your life (however long that will be).

That, my friends, is the reality of breast cancer. Not a cutesy slogan. Not a titillating (pun intended) t-shirt. Not an overtly sexual bumper sticker. It’s not about the boobies. It’s about my life.

39 Comments on “Pinktober is making me crazy…for realz”