At the beginning of this year I had reached my limit of tolerance for the carpal tunnel pain & suffering so I consulted a well-respected hand specialist and got a nasty surprise. In addition to carpal tunnel, I also had cubital tunnel syndrome (I’m an overachiever that way), so the no-big-deal surgery to correct the issues in my right wrist morped into a full-blown ulnar nerve anterior transposition. It looked like this: 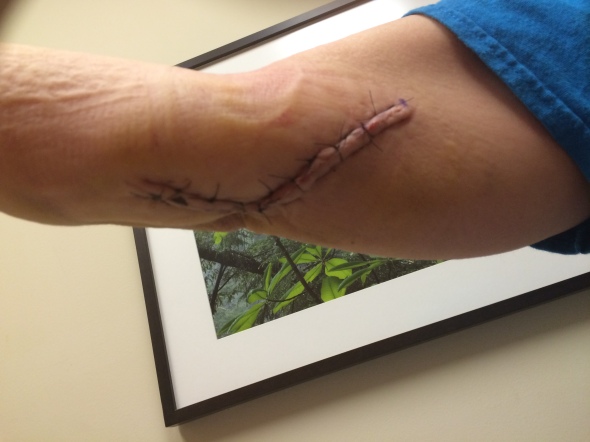 Long story short, the ulnar nerve (which runs from one’s neck to fingertip) becomes dislodged and gets caught on the bony ridge of one’s elbow when one stretches or bends at the elbow. Once dislodged, the nerve needs help getting back in the right place. So, my surgeon had to dig a new channel for my ulnar nerve to lie in, then stitch the nerve into the muscle to ensure that it didn’t go rogue again. It was as pleasant as it sounds (not really pleasant at all). And the scar is about as pretty as you might expect (not really pretty at all). It’s a good conversation piece, though; I’ve been asked more than once if I had Tommy John surgery (do I look like a baseball pitcher?) or whether I won the knife fight.

Now that I am recovered from the fun & games of my arm surgery, it’s time to get back on that OR table and get myself a new knee. Yes, a total knee replacement at the ripe old age of 46.

I’m not looking forward to this.

That said, I am intrigued by the particulars of an artificial knee; the one I’m getting is cutting-edge. It uses a proprietary Oxinium (oxidized zirconium) on the femoral part of the joint, a PMMA plastic on the tibial side, and a stainless steel piece to add a little sparkle. That oxinium is pretty cool; it’s a metal alloy that once heated transforms into a smooth surface that is super resistant to wear & tear and is much lighter than the metal used in older versions of knee replacement devices. It is free from nickel but will likely still set off the metal detectors at the airport. Fingers crossed that the TSA person who gives me a pat-down is gentle (and cute).

The combo of Oxinium and PMMA plastic are the Wonder Twins of knee replacement devices. Rumor has it this combo can last 30 years. That’s important when one is on the flat end of the bell curve that represents the average age of a knee-replacement recipient. As is my custom, I’m way ahead of my peers in my medical needs. Like 20 years ahead.

Being the weirdo that I am when it comes to surgeries, I like to gather all the gory details about the procedure. I usually watch a youtube video of an actual procedure, too, but usually after I’ve endured the horror of the real thing. Here’s how it will go down: Amy doc will make a vertical incision, probably between 6 and 10 inches, on my bum leg. Once in, he will move my kneecap so he can get to the leg bones. He’s going to cut my femur and tibia (if you’re strangely curious as I am, may I suggest that you don’t google “orthopedic bone saw?” That’s just creepy. The fact that such tools are available for purchase on eBay is even more creepy). He promised to measure twice and cut once. (Because the pieces that comprise an artificial knee come in some 90 sizes, I hope he measures more than twice!) Once the bones are cut, he will shape them to accommodate the new pieces that will make up my bionic knee and will attach the pieces to the bones. Then he will attach the parts to the kneecap, using bone cement. My doc told me that waiting for the cement to dry takes nearly as long as the rest of the procedure. Then he will sew me back up and once I’m awake and somewhat coherent, I’ll be off to my hospital room.

Most patients stay three nights in the hospital, but I’m already hoping to ditch out early. I’ve spent enough nights in the joint. I’m fortunate that my doc has a swanky surgery center not far from my home. There are only 5 rooms, which is good because I have no business mixing and mingling with the gen pop in a regular hospital. I hear a lot of people get really sick in hospitals.

8 Comments on “The (nearly) bionic woman”