WordPress is outstanding. I give all credit to the Hubs for choosing WordPress as my blog home. Actually, he gets all the credit for this little blog’s existence. He convinced me to transition from Caring Bridge to a “real” blog. I wasn’t sure I had the chops or the audience for a “real” blog, but he was right on both counts. See, I’m neither too proud nor too Greek to admit I was wrong.

After Trevor  convinced me to leave the safety of Caring Bridge for the wide-open world of “real” blogging, he set out to find the best blog host for me, and WordPress won that contest, hands down. Not to knock those blogs hosted by other, non-WPsites, of course, but WP never asks me to “prove I’m not a robot” by entering a string of jibberish into a little box before my comment can be published. WP never requires me to identify myself each and every time I want to post a comment on someone else’s blog. The brain that powers WP is big enough to remember who I am every time. There’ve been times when I’ve abandoned a comment I was planning to leave on another blog, after carefully composing it (or just rattling off a stream-of-consciousness thought) because the process of proving I’m not a robot and having to enter my credentials took too long or crashed my computer. Not so with WordPress.

I got a handy email from the dear folks at WP the other day saying this: “The stats helper monkeys prepared a 2012 annual report for this blog.”

They provided this cute graphic as well. Thanks, WP; now I don’t have to troll googleimages to find something to pretty up my post.

The good people at WP crunched a lot of numbers and came up with this analogy for my little blog:

19,000 people fit into the new Barclays Center to see Jay-Z perform. This blog was viewed about 100,000 times in 2012. If it were a concert at the Barclays Center, it would take about 5 sold-out performances for that many people to see it.

Click here to see the complete report. Thank you, stat helper monkeys, for this annual report. What a cool gift. Those helpful monkeys laid out my all-time most-viewed post for me. How interesting. If someone — or some monkey — asked me to pick what I thought my most-viewed post was, I’m not sure I would have thought of this one. But I’m not a stat-crunching monkey, now, am I? I’m someone who still counts on her fingers sometimes, and who always resorts to a 20-percent tip in a restaurant because the math is just easier. What I don’t know about stats and numbers and most-viewed posts is a lot.

I’m humbled and tickled and perhaps a bit surprised to see how far-reaching this little blog has become. My heart is warmed by the blog friends I’ve made through this little blog. Women and men around the globe from all walks of life, united in one thing: the need to pour out our hearts onto the WP screen, to try to make some sense of the curveballs life has thrown us. Whether cancer or life in a foreign land or the pursuit of a goal right here at home, my blog friends write about the stuff that is foremost in their minds and filling up their hearts. Through good news (the latest scan was clear!) and bad (the dreaded mets), through everyday events and life-changing ones, we share. We comment. We connect. We come together.

And that, my friends, is a beautiful thing.

As we shed this year and look forward to a brand-spanking-new one, I will take some time to reflect on this little blog and all its stats and numbers. As I prepare for a year-end blow-out celebration with dear friends and lots of champagne, I will think of my blog friends around the world, and I will raise a glass to our shared experience. While I’d just as soon not have been diagnosed with breast cancer at the tender age of 40, had I not, I wouldn’t have started this little blog and “met” all of my wonderful friends in the blog-o-sphere. While I still fervently maintain that cancer is not a gift, it does happen, and we deal with it. We curse it, we cry about it, we blog about it. We come together.

Readying myself to bid adieu to 2012, I think of the year ahead and hope it’s full of good health, dear friends, yummy food, sunny days, bottomless glasses, cherished children, and beloved pets. I wouldn’t mind getting back on the tennis court after 4 long months of rehab for my newly-repaired knee, BTW. I’m thinking of things I want to do in the New Year, tasks I want to tackle, skills I want to acquire, places I want to go. In the immortal words of Mark Twain, I’m thinking of catching the wind in my sails. 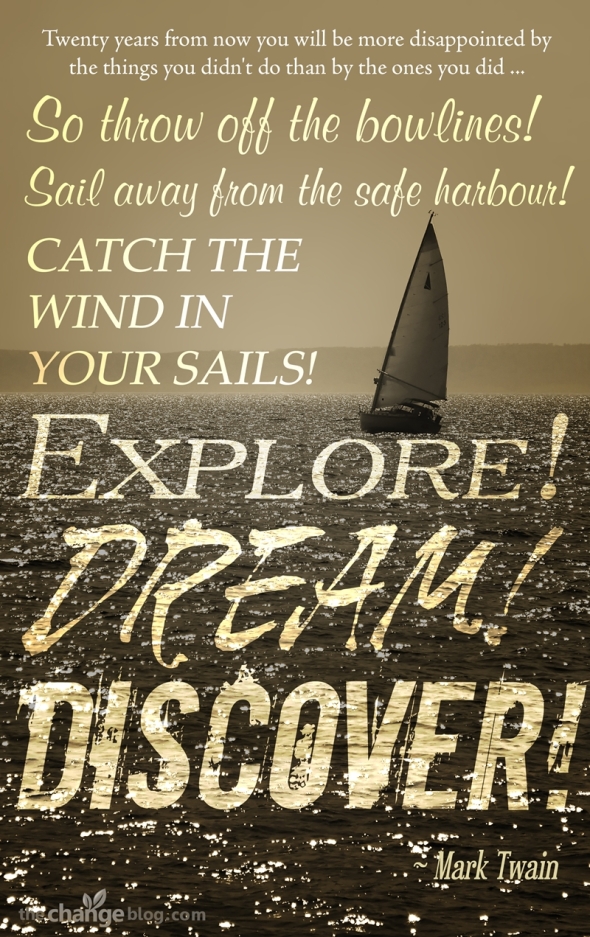 Blogging is like having children…you don’t have to be very smart to do it.

I’m making this wildly judgmental statement based on the itty bitty amount of research I’ve done since becoming a blogger.

That tag, “blogger,” still sits a little uneasily with me. I don’t feel like a blogger, and most days I’m pretty sure that what I have to say isn’t particularly important or interesting to very many people. But once I was diagnosed with breast cancer at the tender age of 40, I realized that there were some people who wanted to keep up with the latest on my situation, and that it is completely impossible to convey such news without blanketing and broadcasting. Thus, a blog was born.

It started out as rudimentary thing on Caring Bridge and grew into this.  While this is certainly a step up from Caring Bridge, I still don’t consider myself a blogger. Not that I have blogger’s block (as evidenced by my rambling posts), nor do I suffer insecurity. I simply consider myself a small fish in a big pond. I recently had a little look-see on the blogging scene. Took a peek into what’s out there, and wow, there’s some bad writing, boring topics, and strange people. I’m still a small fish in a big pond, but hopefully this fish writes well about cool stuff and isn’t too strange.

The amount of stuff I don’t know about blogging is vast. It’s humbling and overwhelming but also ripe with potential. Sorta like life. And really a lot like tennis.

“Really a lot” is one of my favorite phrases. Makes me want to watch Broadcast News again (the movie, not Katie Couric).

That’s the kind of thing you can do with a blog — blab on & on about your personal favorites, or complain about things you hate the most.

Top of my list today of things I hate: science fair projects and inappropriate advertising.

Not together, necessarily. Although maybe some kid could do a science fair project on how inappropriate advertising affects people. That kid could start by watching Sports Center, as my kid does every day of his life, and see what kind of filth and scum pops up in 30-second bites around the real stories.

Just this morning, right after a nice human-interest story on James Harrison, the Pittsburgh Steeler who has been called “the most violent man in the most violent of games,” was an ad for the new Matthew Perry sitcom. The ad featured a woman complaining to Matthew Perry about losing her underwear in his apartment, or some such nonsense. It may be a great show, and maybe this is a riveting storyline, but does it really have to be on Sports Center at 8 a.m.? Can’t they just run another Viagra commercial instead?

Another inappropriate advertising incident (or IAI, for short) that comes to mind: while watching America’s Funniest Videos on ABC Family network, my kids’ retinas were burned by the commercial for the new Ashton Kucher-Natalie Portman movie about hooking up. I’m not going to pander to this media monster by adding a link; if you want more info about this utter waste of acting talent, you are on your own.

Looks like a triple scoop of wildly judgmental rants today.

And yes, I did contact “ABC Family” to complain. I’m sure they are busy writing me an apology letter contained in a Hallmark card with a gift card to my favorite restaurant accompanied by a bouquet of flowers with a mylar balloon that says, “I’m sorry.”

Science fair projects make the list because the 6th grade boy who lives in my house came home from school yesterday with some rude news: the science fair project he thought was optional is indeed very much required.

Cue the frantic scrambling and keep your ears peeled for the screeching to a halt of any carefully-laid plans for the evening. The timing of such everyday calamities never ceases to amaze me. Macy and I were just getting ready to clean out her leopard gecko Cinko’s tank, a project I had been putting off far too long. Just as we were gathering up cleaning supplies and girding ourselves for this task, the calamity du jour erupted on the scene.

It took 3 adults, a trip to Hobby Lobby, a pack of D batteries, and lots of beer to deal with the science fair project snafu, and that shamefaced boy was up way past his bedtime, but we got ‘er done. I can say with absolute certainty that his project would make a Tiger Mother shake her head scornfully at the lazy and slovenly habits of my kid, but that’s ok. Those Tiger Mothers freak me out a bit anyway. But if you feel the need, you can read all about it here: http://www.amazon.com/Battle-Hymn-Tiger-Mother-Chua/dp/1594202842/ref=sr_1_1?ie=UTF8&qid=1296051025&sr=8-1.

On second thought, that looks kinda messy, so try this instead.

I told you I’ve been studying up on blogs.

It does help to have an in-house IT guru (thanks, Trev).

I have a lot more to say about Tiger Mothers but will save that for another day. Because today’s topic is…

Um, I’m not really sure.

It started out as one thing but morphed into something else. That happens here a lot.

Or was it things about which I’m wildly judgmental? (hey, this blog has some pretty nifty features.)

Or was it how stupid science fair projects are and how they should be banned outright from all the public and private school systems in the world?

I have no idea.