After blogging about Emma Keller’s article in The Guardian about Lisa Adams (read my thoughts here), I felt better. Reading the comments that came in response to that blog made me feel better still. But now I feel bad again. And mad. Really mad. As if Keller’s article wasn’t bad enough/mean enough/hateful enough/out-of-line enough, now her husband has gotten in on the hating.

He too is a writer, for The New York Times, no less. He joined the fray, I can only assume in an attempt to defend his wife, for whom the fallout has not been kind. His article misses the mark as much as his wife’s article did, IMHO, and he makes a really lame comparison as the basis for his point.

He compares the way Lisa has handled and is handling her cancer to the way his father-in-law succumbed to his cancer. Lisa is in her 40s with three boys to raise. Bill Keller’s father-in-law was a few weeks shy of 80. Can we really compare the situation of a still-young mother to that of a man nearly 40 years her senior, who also faced kidney disease, diabetes, and dementia? I think not.

Mr Keller chooses to break the same rule his wife broke; the one rule that should remain forever unbroken in talking about a cancer patient and how s/he chooses to handle that cancer: don’t judge.

For example, he writes that “every cancer need not be Verdun, a war of attrition waged regardless of the cost or the casualties.”

Like his wife, he wonders aloud, in his column, about the cost of Lisa’s treatment. Which is none. of. anyone’s. business. He even calls into question her partaking of Sloan-Kettering’s Caring Canines program, in which “patients get a playful cuddle iwth visiting dogs.” He whines about neither Lisa nor Sloan-Kettering not telling him how much “all this costs and whether it is covered by insurance.”

Really?? He begrudges a critically-ill woman’s choice to pet a dog and is pissy because he’s not privy to how much it’s costing her?

He characterizes his father-in-law’s choice to stop pursuing life-extending measures as “humane and honorable” and calm and enviable, while Lisa’s is the opposite, in which she is “constantly engaged in battlefield strategy with her medical team.”

Perhaps the worst part of Mr Keller’s piece is this: “Adams is the standard-bearer for an approach to cancer that honors the warrior, that may raise false hopes, and that, implicitly seems to peg patients like my father-in-law as failures.”

If Lisa Adams wants to be the standard-bearer for one-eyed-one-horned-flying-purple-people-eaters, it is none of Mr Keller’s damn business. If she wants to wave a flag, Braveheart-style, it is none of his concern. If she wants to depend on hope to endure the hell-on-Earth she’s currently living with, he is the last person who should be flapping his gums about it. If she considers herself a success for doing what she felt was best for her and her family in her particular situation, why would any of us take umbrage? Shame on both Kellers.

I’ve not done a good job in this space of writing about — and railing against — metastatic breast cancer, the kind that kills. MBC is every pink-ribbon girl’s biggest fear. Once that cancer leaves the breast and travels to points far afield, usually the liver, bones, and/or brain, the game changes completely. No matter what stage one begins the cancer “journey,” once the cancer spreads, it’s stage IV and incurable. Treatable, but not curable.

The stats on MBC are horrifying, both the number of women who are afflicted and the shockingly low percentage of funds allocated for research: 30 percent of women with early-stage breast cancer will develop MBC, and 90 percent of breast cancer deaths result from MBC yet only 2 percent of funds go toward research for it, according to metavivor.org. MBC is the pink elephant in the room. Or the elephant in the pink room, as the latest metavivor campaign calls it. 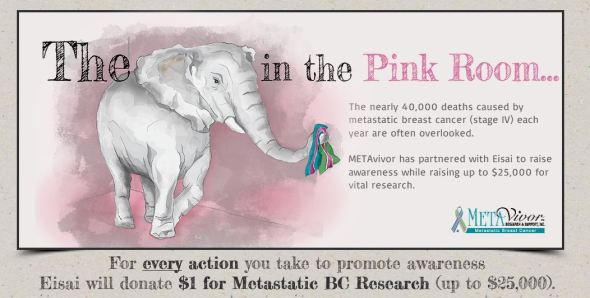 I encourage you to click on this link and go to the metavivor website. There are easy ways to get involved and ensure that more funds go toward research for MBC. Each time someone likes metavivor on Facebook, a dollar goes into the research pot. Share the image above on Facebook, add another dollar. Sign up to receive emails from metavivor and add one more Benajamin. Follow metavivor on Twitter, add one more, and mention it on Twitter with the hashtag #MBCAware for one more dollar donated. The money comes from Eisai, a research-based pharmaceutical company. I don’t know how to pronounce its name, but I like what it is doing for oncology research.

I think about MBC a lot. I’ve written about it a lot. Recurrence is the scariest part of the breast cancer “journey,” IMHO, and that’s saying a lot because this “journey” is full of pitfalls, roadblocks, speed bumps, potholes, and unpleasant detours.

Yesterday I read a fantastic post about MBC by Yvonne at Consider the Lillies, and one part really stuck with me. Much of the post resonates, but this part especially, as it perfectly describes the recurrence side of the breast cancer “journey”:

“I am afraid that the cancer that was removed along with my breast, will reappear in my bones or my brain or my liver. That it will sneakily take up residence in a vital organ. So every little headache is a warning bell, every twinge in my left hip is a harbinger of disease. The series of appointments with oncologists, plastic surgeons, breast surgeons is unsettling. Scribbled in a planner, the dates remind me that my life has been forever altered by breast cancer. I suppose I am doing just fine. I’ve even been told I look just like myself, that God would never give me more than I can handle, and admonished to put my “big girl pants on.” The thing is that those tests and scans shocked me once, and I have prepared a little space inside to be shocked once again.”

I pondered this for a long while yesterday, and realized that I too have prepared a little space inside to be shocked once again. It’s one of the many hard truths about the aftermath of cancer. On one hand, surviving such an ordeal provides a zest for life, a desire to gobble up life in big, gulping bites, to live it to the fullest, in whatever form that takes. But on the other hand, it’s hard to live fearlessly and zestfully while waiting for the other shoe to drop. It’s not a question of thinking positively or hoping for the best. It goes beyond having done the homework and made the hard decisions and undergone treatments to slay the beast. One can do all of those things and still lose this game. One can do everything right, yet breast cancer recurs. That’s why we prepare that little space inside.

In her post, Yvonne calls for an online revolution about the realities of breast cancer, especially the metastatic kind. I’m in. Me and that little space inside are all in.

Marie at Journeying Beyond Breast Cancer has issued a challenge. I can’t resist a challenge, so I’m in. Her idea? Take a photo each day of something for which I’m grateful and share it online.

Today I’m grateful for Mo Willems. He’s a children’s book author who writes a charming series called Elephant & Piggie. We’ve read this series a million times, and with titles like There Is a Bird on Your Head and I’m Going to Surprise My Friend, these books never get old. Even now that my favorite girl has way outgrown Mo’s books, I still smile when I think of Gerald & Piggie. As I recover from Wednesday’s knee surgery, I thought of Gerald & Piggie, and instead of Today I Will Fly, for me it’s Today I Will Walk. 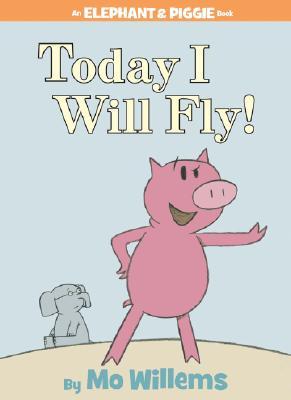 My favorite girl and I were lucky enough to meet Mo Willems several years ago when he came to Blue Willow Bookshop. 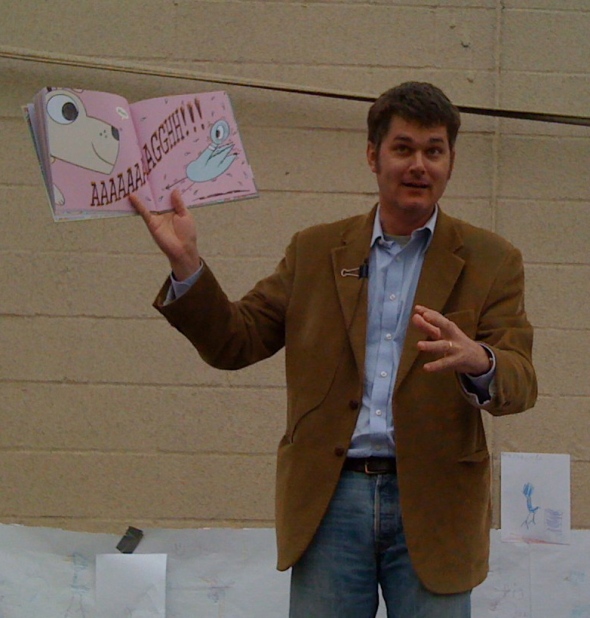 He read from his latest book, The Pigeon Wants a Puppy, and took questions from the audience. 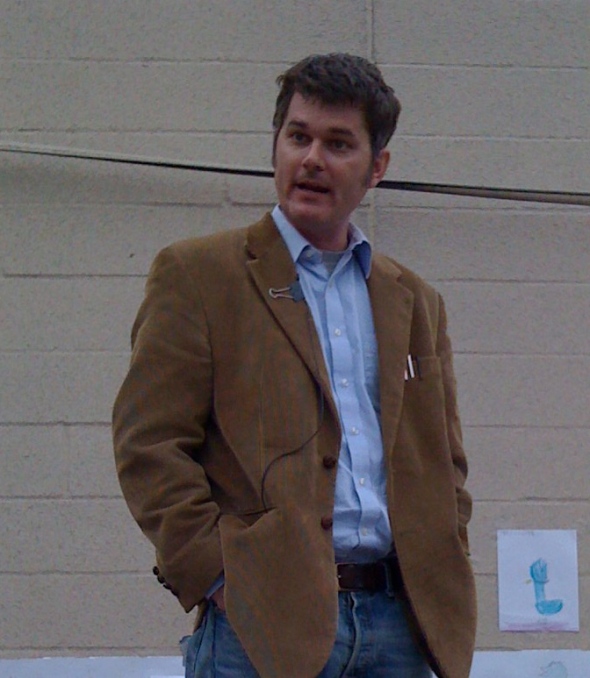 After his presentation, we stood in a very long line to have Mo to sign Macy’s books. He was funny and charming and everything I expect a kids’ book author to be. My favorite girl chattered endlessly about ideas she had for Mo’s books. She had a ton of story ideas in her 5-year-old brain, and I suspect it made perfect sense to her that they could collaborate. So when Mo asked Macy if she had any questions for him as he signed her books, she said, “What’s your phone number?” Sweet Mo was a bit taken aback, and when Macy explained that she has some ideas, he realized he didn’t need to panic, we weren’t a couple of crazy stalkers. 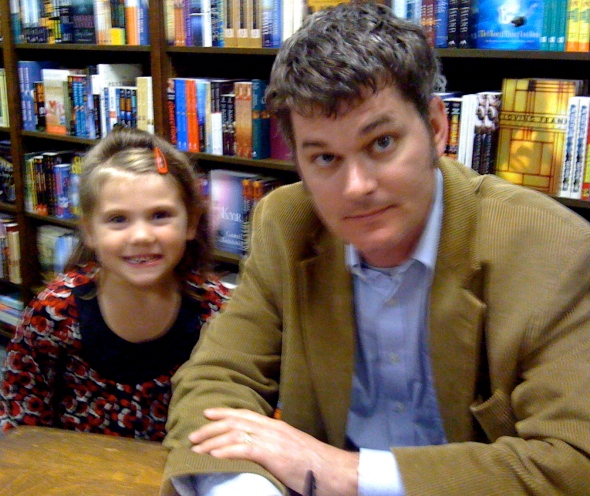 Meeting Mo and being in his presence and seeing how he interacted with all the kids was a super cool experience. Today I’m grateful for Mo Willems. And Today I Will Walk!

Women who changed the world

Rachel’s funeral is today, and I woke up thinking about her. About her enormous contribution to our BC blogging world. About how many people’s lives are better because of her. About how she spoke from the heart, with tremendous passion, and a healthy dose of snarkiness. About how even as this vicious disease consumed her, she wanted things to change, and was willing to type one-handed and battle multiple symptoms & side-effects to get her message across.

All of these women fought tirelessly and valiantly for their cause, whether it be women’s rights, health care, or basic human rights. All of these women became noted cultural icons because of their deep belief in their cause. They risked a lot of promote and further their ideas, and the world is a better place because they did.

It was Margaret Mead who said “Never doubt that a small group of thoughtful, committed citizens can change the world; indeed, it’s the only thing that ever has.”

To this list of thoughtful, committed citizens who have changed the world, I add one more name: Rachel Cheetham Moro.

Our loss is tremendous. Our gratitude to her runs deep. Our hearts are full of emotion. Our minds are consumed with thoughts of her, of this disease. Our focus is singular. Our dedication is renewed.

RIP, Rachel. And thank you.