This is it. Today’s the day. I’m leaving the heat & humidity of Houston behind for 2 weeks of balmy-but-not-hot weather and cool ocean breezes. My right-brained son pointed out a few days ago that I haven’t been to Salisbury Beach in 2 years. Duh. Of course I knew I missed the trip last year — was painfully aware in fact — but hadn’t thought about it in those terms. So it goes without saying that I have a lot of making up to do. A serious re-do is in order, and it starts today.

We’ve been making this trip for a lot of years. My kids looked like this when we started: 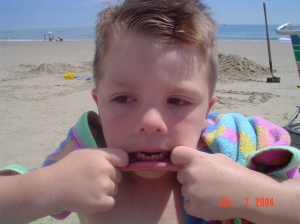 We were much more bogged down with bulging carry-on bags to entertain these little guys on the 4-hour flight. Lugging diapers and endless snacks, as well as car seats, across the country while fretting about how to keep them still during the travel time.

Nowadays they’re much simpler (and thankfully out of diapers). They’re entertained by their iTouch or iPhone and can even load their own devices with songs and TV shows from iTunes. Now that’s progress!

We’ve been talking for days about hitting all our favorite haunts: Markey’s lobster pound, Dunlap’s ice cream shop, Willie’s candy store, the arcade, and of course Blink’s for fried dough.

The order is always the same at Blink’s — chocolate frosting with chocolate jimmies. I try to talk the kids into sharing a piece every year, and every year they insist they need their own. Because fried dough hot out of the fryer and covered in frosting and sprinkles is a tradition at the beach, they win that debate. They’ll burn off the junk-food calories chasing waves in the ocean. The water’s a bit cool for this Texas girl to frolic, but it will make me happy to watch my kids battle the waves in giant tubes.

My heart is full as I gather my last-minute things and zip my suitcase. This time last year, I was learning the ins & outs of home health care and lugging a wound vacuum around while my kids flew across the country without me. I was learning just how insidious cancer is and the many ways in which it disrupts one’s life. I had wrapped my head around my diagnosis, endured endless testing, made heart-wrenching decisions, and faced a nasty surgery and long recovery. All of that was bad, no doubt, but the worst was putting my kids on a plane to go to our beloved beach without me. This time last year I wrote about it on my Caring Bridge page:

“The kids are excited, and they’ll have a fantastic time. I can heal in peace for 12 days with no one to think about but myself. That’s bizarre to me. After spending the last decade-plus taking care of my kids every day, minus a few days every year for a girls’ weekend, that’s kind of weird. If I miss them too much, I can always flip on SportsCenter of Disney Channel and leave a trail of dirty clothes around.”

No need to do that this year — I’ll be right there with ’em. Macy reminded me that we’ll be watching the sunset on the beach tonight. I might even get myself a piece of fried dough.

Payton’s All Star team was one game away from being district champions last night, and they went down in flames. We’d already beaten the West University team but they came back with a vengeance (and their best pitcher). As a seasoned baseball mom who’s used to watching a confident & uber-talented team, I can usually get a read on the game and have a sense of how it’s going to end. Last night I didn’t have my usual “sixth sense” before the game, and even when our boys launched 2 homers in their first at-bat to take a 3-0 lead, I didn’t settle in with my usual feel-good feeling about the outcome.

My kid got hit by a pitch during his first at-bat. Not a wimpy pitch, either, but a smokin’ fastball. That fastball thumped his thigh, just above the knee, quite audibly. My mama- bear instinct kicked in and I was on my feet, wondering if my boy would crumple in a heap on top of home plate. Then my rational brain kicked in and reminded me that my boy is tough as nails and meaner than a red hog on the field. He takes pain like it’s a cool summer breeze, as if it’s a “woonty” on the shore of Salisbury Beach. His pain tolerance is incredible, and yes, he gets that from me. He’s the ideal football player — a coach’s dream — because he’d rather take a beating than admit he’s hurt. Most kids take a “test jog” down the right-field line after being hit by a pitch, to make sure they can still run without a hitch in their giddy-up. Not my kid. After being pounded, my kid just casually tossed his bat and trotted to first base. Not a wince or a whimper from him.

Here’s the after-effect. I expect it to become much more colorful in the coming days.

Payton’s teammate Gus responded to the bean-ball by hitting a homer off the pitcher who pegged my kid. Way to go, Gus!

Sadly, the First Colony bats weren’t as hot for the rest of the game, and we came up short. Errors in the field added insult to injury, and the boys in red got a long, stern talking-to from their coaches instead of a celebratory toast at the local pizza joint.

We face West U again tonight, and will likely bring a renewed vigor for victory. It’s winner take all tonight, so the stakes are high. Whichever team goes home tonight with a victory moves on to the sectional tournament, with hopes of progressing through that and onto the State Championship. Last year, that team was ours, and we’re all hoping for a repeat performance.

No one wants this more than me, since I missed every bit of it last summer. Thanks to a post-mastectomy infection, I was in the hospital instead of in the stands.  The team honored me by wearing pink sweatbands throughout the summer, and Payton still wears his.

We had to get a new pair, though, because the original pair was filthy. The kind of filth that repeated washings and soakings and pre-treating can’t remove. Lots of sweat but no tears last summer. 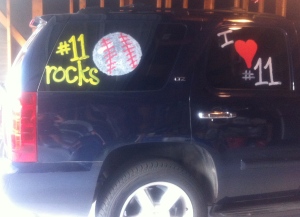 I am the kind of baseball mom who feels deep pride at my kid being selected for All Stars. 20 players are chosen, then that group is whittled down to 11 or 12 for the traveling team. Lots of players — and lots of moms — would give their eye teeth to be a part of this team. Missing the games and the camaraderie last summer was hard. Really hard.

I was able to follow along with the games via an iPad app that allows a user at the game to enter the pitch-by-pitch action so a user on the other end can follow the play-by-play. One of the moms asked me last night if it’s more nerve-wracking to follow along or to watch the game live. I said watching live is way more nerve-wracking. Sitting in a hospital bed staring at the iPad screen isn’t nearly as complete an experience as being in the stands, in the heat, with the roar of the crowd and the sounds of the game. I do have fond memories, though, of the nurses who were constantly in and out of my room getting involved and asking for updates on the game. And I distinctly remember forgoing pain medicine so I could be lucid enough to follow the game. This summer is a whole new ball game, for me.