If you missed the local news last night, you didn’t hear that Staci and I rocked the annual Witches’ Open, our club’s annual Halloween tennis tournament, yesterday.

I didn’t really think about the significance of it all because I was wrapped up in just getting there on time, but thanks to my bossy-pants partner and several others who’ve remarked upon this particular topic, I’ve now officially clued in.

It’s probably a good thing I didn’t have time to think about the significance of all of this, because I might not have enjoyed it as much. I would have over-thought it and put a bunch of undue pressure on  myself and forgotten to savor the fact that I was there, upright & healthy and swinging my racquet. It seems like a long time ago that I went through everything I’ve been through, with the cancer and the surgery and the infection and blah blah blah. It seems like a long time ago but it really wasn’t.

It’s a good thing I was thinking more about the logistics: getting both kids off to school, having my costume ready, packing my tennis bag. If I had stopped at any point yesterday to think about the fact that just 2 months ago I was in the hospital, my mind might have been on something other than slamming that perfect volley at the net player’s feet. If I had remembered that 2 months ago, I was sporting a 5.5-cm-wide wound in my chest wall, I might have double-faulted every time I came up to serve. If I had pondered the fact that I had a raging infection, my passing shots may have lacked authority. If I had spent a moment recalling the 22 days I spent in the hospital this summer, that cross-court winner placed just inside the alley would have fizzled. If I wasn’t so captivated by the fun and spectacle of the event, I might have focused on the fact that everything that could have gone wrong after my surgery pretty much did, and that would have sent that lob sailing right over my opponents’ heads but just outside of  the baseline.

So it’s a good thing I didn’t think about it, any of it, until after the fact.

Now that I have thought about it, (and thanks, partner, for reminding me of the very short timeline), I’m pretty well overcome with emotions, from thankfulness for my current good health to gratitude to my tennis friends for their incredibly warm welcome back and patience with me as I reacquainted myself with the game. It sounds so cheesy when people say to appreciate each day, each moment. But it’s really true, especially after you have some crazy medical drama in your life. Life is short, and it is precious. And we never know from one day to the next what’s ahead. So make the most of it. 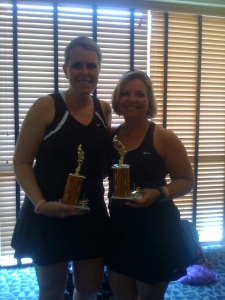