If our annual reunion weekend of my Duke girlfriends had a theme each year, this one might be “Making a Silk Purse from a Sow’s Ear.” But seeing as I have a mini sow at home, who is such a valued member of our family that the idea of using her ear, or any other body part, for a purse is utterly repulsive, we’ll go with another cliche. Perhaps “Making Lemonade from All the Lemons We’ve Been Given.”

In the 8 years we’ve been gathering each June for a long weekend of catching up, we’ve never been rained out. Until now. Thanks to Tropical Storm Debby, we spent maybe an hour and a half on the beach this trip. Total. One evening walk and one brief session on the lounge chairs. The beach umbrellas were dutifully erected by charming young beach attendants but served as a shield from rain more than sun. As Winnie the Pooh would say, “Oh, bother.”
Instead of lounging lazily at the edge of the surf, being bronzed by the sun, we resorted to Plan B: curling up in front of the TV to watch seasons 1 and 2 of Downton Abbey. Thank goodness for quality entertainment from across the pond! None of us in our little group are big TV watchers, but we all were mesmerized by the Crawleys, et al and their upstairs-downstairs life.
We still managed to get ourselves to our favorite Captiva Island restaurant, The Bubble Room, for dinner and a piece of the orange crunch cake. It sounds like an odd combination: white cake with an almond-streusel filling tinged with orange zest and frosted with an orange buttercream. Trust me, it is beyond delicious. Great, just typing that description made me wish I had more now. Right now.
The beach washout wasn’t the end of our troubles, as the flights out yesterday were a mess. Half of our party was flying Delta to Atlanta and then points beyond, and were met with a mechanical issue that delayed them 5 hours and would require a stay in an Atlanta airport hotel. The other half of our party was on United to Houston direct, trying not to feel smug about heading home no stop. That smugness was rudely interrupted, however, as out takeoff was aborted because of faulty brakes.
The faulty brakes issue was not to be resolved because of a lack of a mechanic in the area, so it was off to the airport Hilton for us. Oh, bother.
We’re booked on the same flight today with fingers crossed. If all goes according to plan, we will land in Houston at the tail-end of rush hour and will face the 50-mile trek from the airport back to the ‘burbs, a full 24 hours after our originally scheduled homecoming Oh, bother again.
Meanwhile, we’re killing time in the hotel until they kick us out and will then kill time at the airport until our flight (hopefully) takes off. Oh, the joys of travel!

So it’s 1:00 in the morning and I’m wide awake. You’d think an impromptu dinner party with the hens in which we put away 5 bottles of Piper and 2 bottles of wine would give me the impetus for a hasty nighty-night, but no, my brain is whirring & churning instead of sending vibes of lullabies. 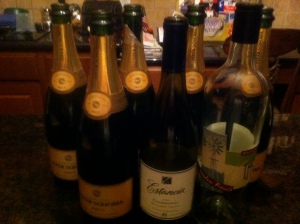 I have no idea how all those bottles got emptied, but I do know that I will be worthless at my early-morning tennis drill. I’m not a night owl, and no matter how late I stay up, I tend to wake up with the roosters, so I’m already thinking about the piquant smell of the coffee beans being ground and am hearing the sound of the jet-engine-like grinder as it pulvarizes the coffee beans into a fine enough powder that combined with hot water elicits an energizing brew.

Girlfriends old and new gathered around my dinner table is a tonic for the soul, for sure. Grilled teriyaki tuna steaks, ginger rice pilaf with snow peas, roasted broccoli, and a most delicious salad of mixed greens, goat cheese, strawberries, blueberries and candied pecans filled my belly and my soul with happiness. Throw in a sinfully complex chocolate mousse cake and you’ve got the recipe for bliss.

I’ve promised Payton & Macy a trip to see Kung Fu Panda 2 tomorrow, followed by a belated graduation dinner for my cousin Melissa. I may be napping through the movie and longing for my bed early tomorrow, but will not begrudge the laughter and fellowship of the late-night hens’ dinner party. As Po would say, “You guys see that? It’s called being awesome.” And as we all learned from the original Kung Fu Panda, there’s no charge for the awesomeness. 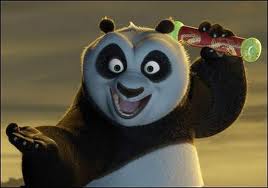