Editor’s Note: There’s a glitch on WordPress that is hiding my hard returns, so this is one long post without the usual breaks in text to give the eye a rest. Apologies.

Love this quote. Love GB Shaw, too. Apparently he didn’t like the “George” and refused to use it, personally or professionally. That’s why I call him GB Shaw.

He’d be a dapper looking fellow if he’d have done something about that mess of facial hair. I’ve never been a fan of the facial hair, on men or women. Just not my thing.
He certainly was accomplished, though. Born into a lower-middle-class family in Dublin in 1856, he certainly could have fallen by the wayside or become a failed corn merchant but successful drunk, like his daddy. It’s said that his daddy had a raging drinking problem and a serious squint (although not related, perhaps). Here’s a useless but interesting bit of trivia: Oscar Wilde’s father, a famous surgeon, tried to fix Mr Shaw’s squint, but failed. Either he wasn’t that great of a surgeon, or it was a truly serious squint. If only my Drs S could have gotten their hands on him. No telling how fine-looking he would have become after they worked their magic.
GB Shaw is noted as a playwright, and an accomplished one at that. He also dabbled in politics and reform for the masses. His Fabian Society tried to bring socialism to Great Britain but failed. The Society did eventually become the famed London School of Economics and led to the birth of the Labour Party. Neat, huh?
More importantly, he’s also a font of inspirational quotes, like the one above. After having several comments on my recent post about how ya just gotta “keep on keeping on” when going about this “cancer journey,” it got me thinking about how easy it would be to lie in a heap and say poor me. And I guess a lot of people do that. GB Shaw would be very disappointed.
Look, nobody wants a cancer diagnosis, whether it’s in the breast or the lung, the colon or the skin. I could write for days on the myriad ways having cancer wrecks your life, whether physically, emotionally, financially, or more likely all of the above. But once that pathologist confirms the malignancy and the doctor delivers the diagnosis, rolling over isn’t an option. Giving up and giving in doesn’t get the job done.
I haven’t been tempted to give up this week, but the thought did cross my mind as I found myself mired in nausea all week long. Sometimes this happens — I’m going along just fine, taking my antibiotics twice a day every day (for 254 days, but who’s counting) like a good girl, and wham! out of nowhere is the all-day morning sickness. I’m not doing anything differently, haven’t added any weird vegetables or roots to my meat-avoiding diet. Don’t lecture me about the beets; those are a mainstay and I like it that way. Don’t care if it grosses you out to see them on my plate–look away (Macy).
By no fault of my own, I’m suddenly hit with the kind of stomach upset that makes me think long and hard about the wisdom of carrying a barf bag in my purse. My sweet infectious disease doc is immune to my perennial question of how long will this drug therapy go on, and I don’t even ask him any more. Love ya, Dr Grimes. His nurse, Rhonda, gave me a glimmer of hope on the phone when she said he might knock the abx down to once a day, but alas no deal. Instead, he gave me a prescription for Zofran and said take that and eat some crackers.
So what’s a traveler on the “cancer journey” to do? Slog away, day after day. Put one foot in front of the other. Just keep swimming (Dory). Keep on keepin’ on. Just Do It. And any other clichéd truism you can think of. You do what you gotta do to get through the day, then get up and do it again. Some people also meditate. Some people pray. Some people fret. Some probably do a combination of the three. But you gotta do something. Inertia has no place along the “cancer journey.”

A cast of characters, minus one 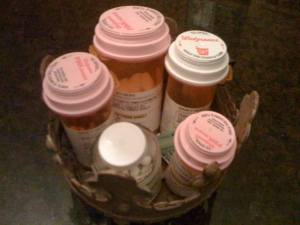 I’ve had this snazzy little grouping of prescription drugs on my kitchen counter for months now. Yes, the lids are pink, because my Walgreens had them for the pinkwashing that comes every October for Breast Cancer Awareness Month. Cute, huh?

These are the drugs I take every day, like a little old lady. My old standbys. The usual cast of characters.

There are the two big stars sharing top billing, Bactrim and Minocycline. My darling antibiotics that course throughout my body twice a day, every day to kick some mycobacterium butt. I would be lost without them. Or perhaps I would lose the all-day morning sickness feeling without them, but that’s just wishful thinking. Maybe I’d be dead without them, who knows? There was a time when I was almost sure I was dying from them, but I got over that.

Next we have the Florastor, the one thing that besides coffee that keeps me upright every day. I’m forever indebted to Susan Christopherson for turning me onto this probiotic that helps restore peace and order in one’s digestive system after said system has been under attack by the slash & burn tactics of an antibiotic regime. There have been a few times over the last 6 months of living under this regime in which I’ve either forgotten or willingly neglected the Florastor, and I paid dearly for that mistake. It’s not a prescription, but is kept behind the pharmacy counter for some reason. I don’t have to show my driver’s license to buy it, though, so I guess you can’t make meth out of it.

There’s the Ferrex iron supplement, since I’m a bit anemic and because I need uber-healthy blood vessels to harvest during reconstruction. Because I don’t eat any meat, I need a little help getting my iron; I get some from all the dark, leafy greens I eat, but not as much as my carnivorous friends ingest. My sweet, Peruvian oncologist can’t for the life of himself understand why someone would willingly forego meat. He shakes his head and looks at me a little funny every time it comes up, and he tends to bring it up every time he sees me. I’m done expecting him to compliment me on my plant-based, cancer-fighting diet. It didn’t help much, anyway, so I guess everyone is free to go on ahead and eat a big-ass, nasty, extra-rare steak. Might as well add some fries, or a loaded baked potato. You can see how far the healthy eating thing got me. Harumph.

Then there’s Tamoxifen, my daily cancer-battling bad-ass. It makes sure that there’s no estrogen flowing to feed any remaining cancer cells. While the side effects are troublesome (early menopause, hot flashes, leg cramps, decreased fluid in the joints, to name a few), I like the idea of starving those bastards. Tamoxifen is my first line of defense against recurrence. It makes me feel like I’m doing something every day to keep this beast from re-entering my life. It’s a daily pill that I’ll take for 5 years, then reassess to determine if I should stay on it or switch to another, similar drug.

And today I stopped taking it.

That scares me. More than a little bit. But since Tamoxifen can promote blood clots, it’s counterindicated with surgery. So I stop taking it for 3 weeks and hope that nothing goes haywire with my bloodflow. No clots, no bloodletting, no drama. That sure would be nice for a change.

Although I’m subtracting one prescription from my snazzy little grouping, I still feel like a little old lady whose life revolves around her meds. Ya know the old wisecrack issued when someone asks what time it is, and someone else smarts off, “Why? Ya gotta take a pill?” In my case, the answer is yes, smart ass, more than one pill. So zip it and get me a big glass of water so I can choke these guys down. While my life may seem to revolve around my meds, I refuse–I mean, dig in my heels and refuse–to get a plastic pill organizer. I’m all about accessories, but not that.