Two weeks into this new year, I am wrapping my head around a whole ‘nother challenge. This new game has nothing to do with cancer (for the moment, anyway — knock wood) but concerns the myriad ways my body challenges me. I refrain from classifying those challenges as failures, i.e., the many ways in which my body is failing me, because that is the new game: the mental side of physical illness.

I’m a fierce player in all aspects of the game that is confronting health issues. All aspects except the mental game. I suck at that part. Give me the worst-case scenario (mycobacterium fortuitum, I’m talking to you) and I will slay it. Give me a long, difficult road on which to travel, and I will keep on truckin’. But tell me that the only weapon I have in which to fight is my mind, and I’m hosed. Tell me to stay positive and look on the bright side, and I struggle. Offer me platitudes and I will want to punch someone. Outlook: not great.

Some of the news ways in which my body challenges (fails) me are minor: graduating to the bifocal club, or needing to hit the hay well before midnight. To those challenges I say let’s call a truce. But the bigger challenges are well, bigger. And more challenging. There are three bad guys vying for attention these days: the bad knee, the wonky thyroid, and carpal tunnel syndrome. Awesome.

The bad knee is acting up and acting out. Again. Three surgeries and countless rehab exercises mean nothing to that old hag. The misaligned kneecap is screaming for attention, and the missing cartilage is hunkering for its piece of the pie. Two very squeaky wheels in an already crowded field. The second round of synthetic synovial fluid injections did little to appease the missing cartilage. 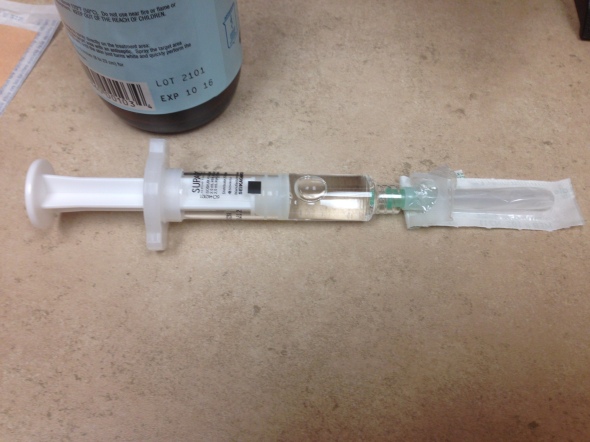 Despite the giant needle being jabbed straight into the innocent flesh adjacent to the bone-on-bone area, relief evaded me. Upon reviewing my day-after-Christmas x-ray, my orthopedist shifted gears from a previous recommendation of partial knee replacement to osteotomy, which requires cutting the bone at the top of the tibia and using plates and screws to relocate it in its proper place. The one word that comes up when researching the recovery for this surgery: brutal. Standard care is crutches for two weeks and a cane for a month alongside endless physical therapy. Thanks but no thanks.

The thyroid is being an asshole, as well. Long story short: underactive thyroid, two daily meds, and two nodules that may or may not be problematic, and dissenting opinions by my crack medical team as to whether another thyroid biopsy is needed. Being the fierce player that I am, had my crack team concurred, I would have promptly had that biopsy. As much as I detest the idea of another needle being stuck IN MY NECK, I will do it if it’s necessary. But if there is dissent on the matter, I’ll defer. That said, that asshole thyroid has some wily ways of mucking up my life. Symptoms and side-effects of a wonky thyroid are far-reaching, and just when I think I have them under control (or am at least resigned to them), another one makes its grand entrance.

Which brings us to the third challenge: carpal tunnel syndrome. For a couple of years I’ve had what I thought was neuropathy: tingling, numbness, swelling, and radiating pain in both hands especially first thing in the morning. It came to a head shortly after we moved into our new house last year, and my GP chalked it up to overuse of my hands and forearms from packing and unpacking endless boxes. A round of steroids and some anti-inflammatories should have done the trick, but instead there is a fresh new hell to endure.

If I employ the “coulda/woulda/shoulda” tactic for dealing with the three most-pressing physical challenges, I find myself regretting my decision to put off treatment even though I had met that $6,000 deductible last year. As I face the blank slate of a reset deductible, I wish I’d sucked it up and had the surgeries and procedures I need. Perhaps I would not be typing this very post with pins & needles fingers. Perhaps I would not be thinking about how stiff and sore my knee will be after sitting at my desk to compose a blog post. Perhaps I would not be chiding myself for having been tapped out by the end of 2014.

Cue the mental side of dealing with a physical issue. Because I did not have these problems surgically repaired, I must figure out how to change my thinking. For instance, I give myself a pep talk on the way to the gym. It goes something like this:

“Don’t think about what you used to be able to do, but focus on what you can still do.”

“Lots of people more able-bodied than you aren’t even trying.”

“Don’t look at what the other gym-rats are accomplishing; comparison is the thief of joy.”

“Even a shitty workout is better than no workout at all.”

I’m not very good at this part. I recall the words of my favorite yoga teacher: where my mind goes, so too goes my energy. I envision my faulty parts bathed in a warm glow of healing energy. But it’s work. A lot of work. I’m not a fan of listening to my body and accepting limitations; I much prefer to push through the pain. It’s a struggle to avoid falling into the “haven’t I suffered enough??” mentality, and it’s certainly not a great way to start a new year. But, instead of deciding that this old dog can’t learn a new trick, I will become a player (albeit not a starter) in this mental game. As the great Yogi Berra once said, “Ninety percent of this game is half mental.”