I want my mommy!

They say time heals all wounds, but I say “heals” is a bit of a stretch. It’s more like time puts a too-small and not-so-sticky band-aid over the gaping wound where your heart used to be. They also say that you never get over such a loss, you just get through it. Whoever “they” are, they got it right that time.

I still miss her every single day, in one way or another. Her big, genuine laugh. The way she fretted incessantly. Her habit of always taking my kids’ side, even when they were naughty and unruly. The daily phone call, even when she had nothing much to report. Her ability to worm her way into anyone’s heart. Watching her in the kitchen, and marveling at how she knew how to get everything just right.

I’ve written a lot in this little blog about how much I miss my sweet mama. I’ve read a lot about losing one’s mother. I’d like to think it helps, that it’s somehow therapeutic to get it out, to empty my heart and head onto the screen. When I come across a particularly interesting or helpful tidbit on the subject of mothers and/or loss, I jot them down. I usually forget to include the attribution, as I did here:

Motherhood isn’t a test but a religion, a covenant entered into, a promise to be kept.

No idea who wrote that or where I came across it, but I like it, and my sweet mama definitely embodies those ideals.

This one was in O Magazine, and again, I neglected to give credit where credit is due. To the author of these wise words, I apologize, but please know that your words moved me enough to pull out my iPhone, tap on the Notes icon, and copy the passage for quiet reflection at a later date:

You never get over what you lost. You always carry it with you, stitched to you like Peter Pan’s shadow. And you never wanted to get over it, because who wanted to forget a time that had been so important? No, the truth was, you wanted to remember it always.

I guess I’d say that it’s impossible to forget something (someone) so important. I do carry her with me, and I will never get over the loss of her. If I’m half as important to my two kids, a fraction as beloved, I will consider my life a great success.

I read a book review a while back about Caroline Kennedy’s book Jacqueline Kennedy: Historic Conversations on Life with John F Kennedy. (Whew, long title.) In the review, Caroline talked about how at age 53, accomplished and well-educated, she still referred to Jackie O as “mummy.” We never get over losing our mothers.

She went on to talk about the qualities she most admired in her mom, which she wanted to highlight in the book: the sense of strength, her passion for reading, and her will to move forward despite the pain that had come her way.

I can relate to that. My mom was amazingly strong, but in a quiet and gentle way. She loved to read and was a middle school English teacher in her life before becoming a full-time mother. And she had seen her share of pain: losing her own mother at age 13, raising her younger sister, losing that sister to pancreatic cancer, then enduring her own protracted and awful cancer battle.

I can relate to everything Caroline Kennedy says. My mom wasn’t as glamorous as Jackie, and I didn’t grow up in Camelot. I do have a brother named John, though; however my mama wouldn’t let anyone call him John-John or Johnny. Our neighbor across the street tried to call him Johnny, but my determined mama nipped that in the bud. She named him John after my dad’s uncle who immigrated from Greece. His name was John and she insisted that he be called John.

When Caroline Kennedy listened to the 8 hours of interviews between Mrs Kennedy and Arthur Schlesinger, which Caroline used to make up the book, she had a strong reaction. She says, “I read them right after mum died and had the sense she was speaking to me again. I could hear her saying what I was reading (smiles).”

What a precious gift. To hear my sweet mama again would be such a treasure. I have to work hard to remember what her voice sounded like. The more time that passes, the harder it gets. The more years that roll by without her, the less I feel like I know her. She seems to be fading from me.

I still call upon her a lot, especially in the kitchen. Just the other day, I was helping my favorite girl in the kitchen. She’s doing an ongoing bake sale to raise money for her class trip to Washington, D.C. and was baking my mom’s pumpkin bread. The house smelled sweet and spicy, the cinnamon, allspice, cloves and nutmeg redolent of fall (even though it was 90 degrees outside). Watching my girl take on a task (raising money for her trip), executing her plan, and carrying on my mom’s fine tradition of expressing her love through food made me proud. And sad. Because I knew how much my mom would love to see my girl doing her thing. She would fret over my girl, telling her to scoop the flour lightly, without packing it down. She’d say, fold the dry ingredients gently into the pumpkin mixture so the bread will come out light and fluffy instead of dense. She’d tell my girl to clean up as she went along, so that there won’t be a giant mess at the end. And she’d scold my girl for wanting to taste the batter; my mom grew up on a farm with chickens and was always leery of eating raw eggs.

I needed my mama that day in the kitchen with my hard-working girl. After the pumpkin bread baked and we let the loaves rest in the pan for 10 minutes, we knew to turn them out onto a rack to cool. But the still-warm bread was so moist it was very soft on the bottom, and I didn’t want the rack to make marks, or even worse, for the bread to stick to the rack. If we turned the loaves upside down, to rest on their tops, would the racks still make marks? What to do? Mom’s recipe didn’t address this important question, and although I’d seen her make pumpkin bread countless times, I couldn’t for the life of me remember what she did with the cooling loaves. And I sure couldn’t just call her up and ask her.

My mom and my girl didn’t get to spend much time together, because cancer stole YaYa from my girl when she was just 3 years old. No fair.

My sweet mama and my favorite girl, at home the day after my girl was born 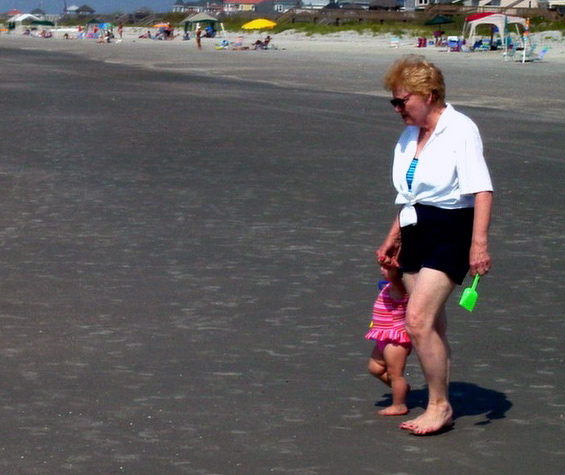 They didn’t have a lot of time together, but they made the most of it.

Read more about my sweet mama:

The Spring of My Discontent

Only Just a Dream