Couture for the Cause, redux

I was trying to download some photos from the professional photographer’s website for the Couture for the Cause this past Saturday night. They have some beautiful pics of the event, and a handy “Post to WordPress” feature, but when I tried that feature, it posted the pic without allowing me to add any text.

So I will use the non-professional photos, taken by one John Burrmann, which IMHO are plenty good. See for yourself. He focused more on the people than on the venue, so I will paint a picture in your mind of the stately grounds and lovely estate that housed our fashion show and fundraiser for the American Cancer Society. The house is nestled onto a huge lot that slopes gracefully to a private lake. The runway was constructed on the lawn, with chairs around the perimeter and small round tables sprinkled around to allow for casual viewing of the big show.

The show is a big deal. Last year the event raised some $94,000 for the ACS, and I hope this year exceeds that amount. Having cancer survivors model the fashions is a brilliant idea, both because it encourages the audience to dig deep into their pockets, and because it gives us survivors a chance to celebrate life. What’s more important than that after we’ve faced a terrible disease, difficult surgeries, ongoing treatments, and uncertain futures? Nothing. Not one thing.
There were several breast cancer survivors modeling again this year, and we talked amongst ourselves about how many years out we are. There was also a 20-year-old leukemia survivor who’s been in remission for 15 years. One model had brain cancer and is facing another reconstructive surgery next week. While all of the survivors who participated have a different story, we also have a commonality, and it was nice to unite in that commonality for one night and celebrate life.

The amount of volunteer hours and professional time that go into the gig are staggering, and the result is a first-rate production. I’ve been looking forward to this for weeks, and being an experienced survivor model I was ready to do my thing. I had the ultimate fun of having two of my dearest friends model with  me. Amy and Christy both rallied at my side when the Big C wrecked up my life, and it was such a fun thing to have them by my side for the big event. Unfortunately, the excitement was clouded by sadness from the unexpected death of our sweet dog Harry.  Because he died late Thursday night, I made the executive decision to not tell my kids until after school on Friday. It didn’t seem right to tell them Friday morning and send them off to school; I wanted them to have the luxury of grieving in private. I fretted all day Friday about how to tell them. I should have consulted my intrepid breast surgeon, Dr Dempsey, who has honed the skill of delivering bad news to an art form. I’m sure she would have had just the right words. As it turned out, I delivered the news then had to rush off to rehearsal for the show. My head wasn’t quite in the game for rehearsal, and I struggled with the finer points of the runway choreography. The “one and a half” and the “down and back” refer to the way we walk on the runway all decked out in our finery, and while it’s not hard, it took some brainpower to master.

Lenny and Tamra are the dynamic duo who take these fashion shows from cute clothes and accessories to a full-blown production. They pick the clothes for each of the 22 models, add accessories from jewelry to hats to feathered headpieces, design the sets and lighting and choose the music, then orchestrate all these pieces to cohere into the sum total of an amazing show.

We were instructed to show up at 6:00 sharp for our 8:45 pm showtime. Hair & makeup were time-consuming but fun. The show’s theme of the Roaring Twenties was reflected in the intricate hairstyles that featured soft waves and lots of pin curls. Makeup was subdued but included false eyelashes and red-red-red lipstick for each female model. As we went from chair to chair in the war room of hair & makeup, we felt like celebs preparing for a red carpet debut.

check out those eyelashes!

After the work was complete in the war room, we hustled to the dressing tent behind the runway. Talk about a chaotic scene. Each model is assigned an assistant called a dresser. The dresser’s job is to help us into our clothes, put on our jewelry and shoes, and make sure we are ready to leave the tent and present ourselves backstage for final inspection by Tamra. No detail escapes her sharp eye, and she is ready with a safety pin to bind a gap, a hairpin to tame an errant mane, and a keen sense of how a headpiece should lay or a scarf should be tied.

There’s not a lot of time to get dressed, and even with our dressers helping, it’s a crazy, crazy scene. In fact, as soon as we left the runway in one outfit, we were instructed to start taking off as much as we could while hustling back to the tent. Getting dressed was even crazier this year because two of my outfits were very light-colored — one white with a black skirt, one ecru with an orange ruffle — so trying to pull them on quickly while not smearing makeup on them was no small feat. My intricate flapper-style hairdo complicated the speed-dressing process, too, as there were 100 bobby pins holding my hair up that needed to be delicately avoided. There’s nothing delicate about a tent full of women and their dressers in the middle of a fashion show. The production assistants were yelling out our names to let us know we were due backstage, and a few male assistants were in the tents, too, making sure we staying on task and on time. There’s no place for modesty in the tent.

The first scene featured black & white fashions and was kicked off by the professional models. These girls know what they’re doing, and they know how to get the show started. This lucky guy got to strut his stuff with one of the pros, Mariah. She and I chatted in the war room and she’s as nice as she is beautiful. 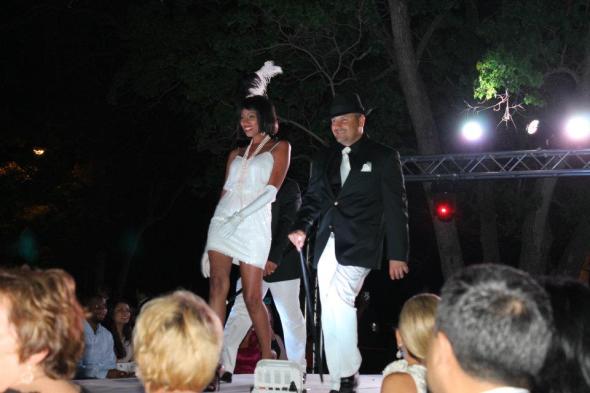 The professional models may have had all the right moves and the picture-perfect looks, but we had the best cheering section. A sampling of our supporters:

The applause was thunderous, and there was more than one instance of hootin’ and hollerin’ when we took the stage. I only wish I’d channeled some of Mariah’s grace and stage presence when I hit the runway in my black & white outfit. 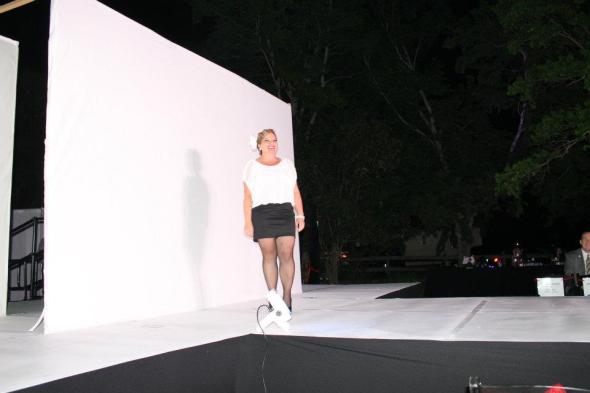 This isn’t something I ever would have picked for myself, but that’s part of the fun of the fashion show. The skirt was rather short, and the fishnet hose were a bit out there, but it was fun, fun, fun!

Christy’s black & white outfit was a romper, which Dr Dempsey referred to as a onesie. Some fishnets and a beret completed the look.

Amy’s outfit for this scene was so cute, and she rocked it.

The true-blue friend who brushed my teeth in the hospital and mediated more than one altercation with a white-coated professional was utterly transformed into a hot-hot-hot model!

Not only did I have some of my best girls modeling with me, I also had Dr Dempsey struttin her stuff. She did an outstanding job puttin’ on the ritz, and while I enjoyed every minute of modeling with her, I hope she doesn’t quit her day job! (She’s the blond, on the right.)

She told me she had an alter ego on the runway, and now I know that to be true. Being together for this event also gave her the chance to fuss at me for not coming to see her for my post-mastectomy follow-up. I’m a bit behind on that, but I’m happy to report that I went yesterday.

Scene 2 was tangerine-themed, and my one-shouldered dress was super fun (but a little too blousy). The ecru color with the tangerine ruffle was cute, but I’m not posting a pic because it’s not very flattering. It’s my blog, and I can withhold photos if I want to.

Instead of showing a not-so-great pic of me, I’ll show you the pros doing their thing:

The one bad thing about being involved in the fashion show is not getting to see everyone on stage. While these girls were modeling these cute dresses, I was frantically getting out of outfit #1 and into outfit #2.

I was able to watch this husband-wife combo strutting their stuff, and I would have loved to have seen more. They were having a ball and the crowd loved them. 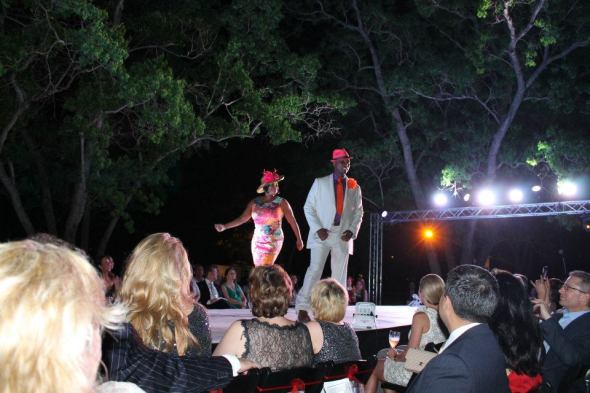 This lovely lady is a longtime survivor who gives newbies like me a lot of hope. She also rocked the runway in her high heels.

Our third scene was print dresses, and they were so so so cute. Amy looked like a million bucks in hers. 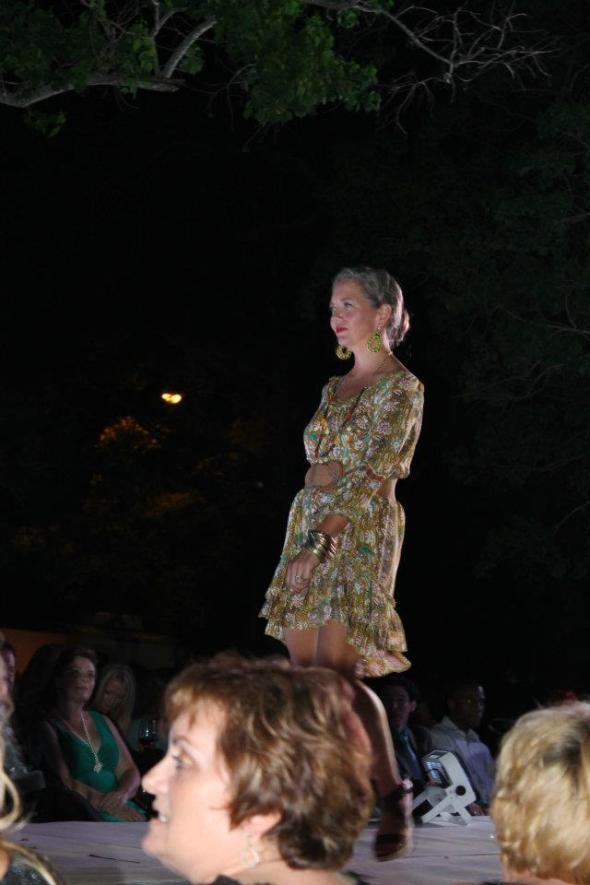 Christy and I got to walk together for this scene, and we both love our dresses. We had to try hard not to giggle and talk while cruising the catwalk. 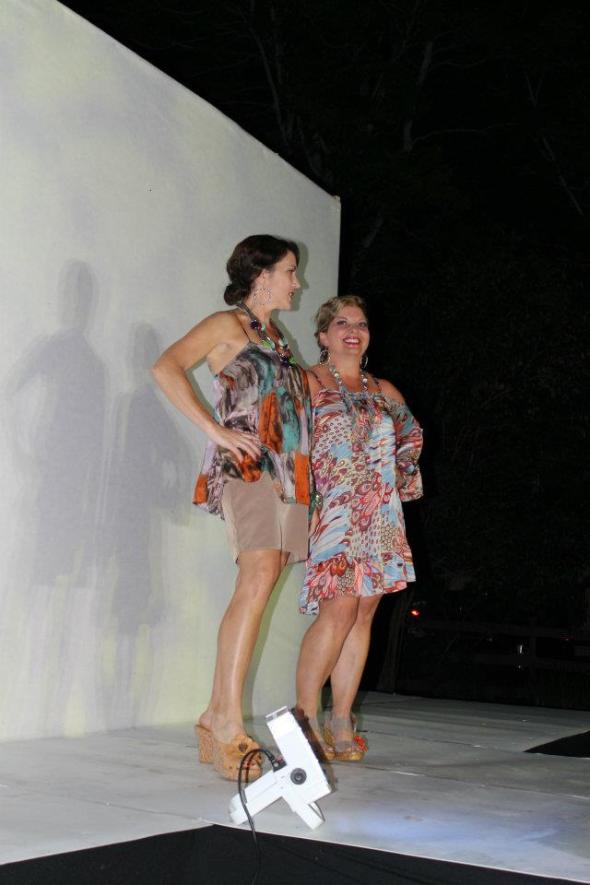 The pros glammed it up in long dresses in gorgeous colors.

The show was almost over at this point, and we didn’t have to change into another outfit but just get ready for the big finale. 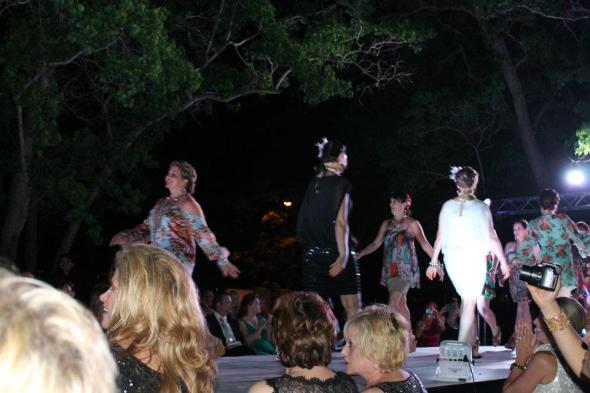 All the models circled the runway in a triumphant finish. Our faces hurt from smiling, our feet ached from struttin in heels, but our hearts were full of pride and happiness.