The End of an Era

Hey there, it’s been a while! Countless times in the last several months I’ve thought, “I really want to write something for my blog” and yet….Life gets in the way. Big time. But here I am, so let’s get to it.

It’s been busy around here, with my firstborn graduating from high school and preparing for college.  Lots of changes in the last couple of months, and lots more to come. In April, my boy played his last baseball game. In May, he turned 18 and went to prom. In June, he graduated high school. In August he will leave for college. 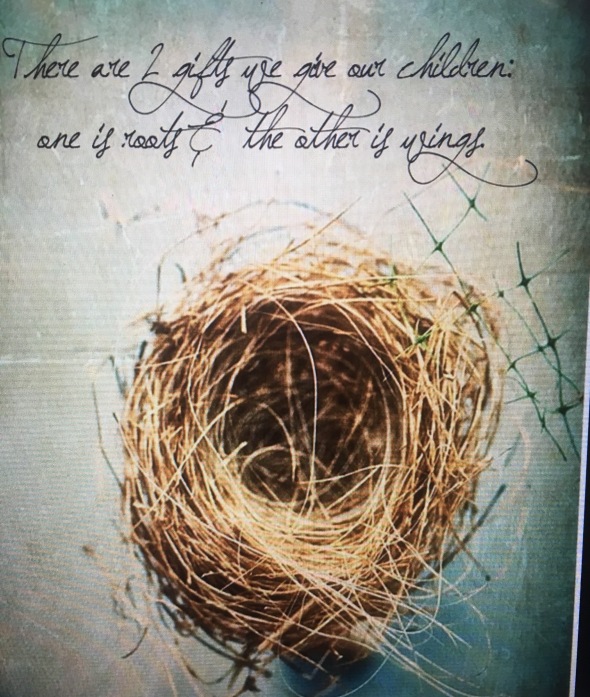 I suppose I’m joining the ranks of parents around the world who wonder: wasn’t it just the other day that my kid started kindergarten? Wasn’t it just last week that my sweet little boy wore a paper tag around his neck with his name and bus number? At the risk of sounding like Tevye in Fiddler on the Roof, wasn’t it yesterday when he was small???

It goes without saying that I am proud of this kid.  Although he received a scholarship to the University of Houston, he chose Texas A&M University (the hubs and I both try not to wince or whimper about the fact that our son will wear maroon instead of our beloved burnt orange).

Time is a funny thing: moving glacially slowly in some cases, yet zipping by at warp speed in other cases. I’d heard many times the sage advice to “savor every minute” of my firstborn’s senior year, and despite my best effort, those minutes slipped by and disappeared. We celebrated P’s senior-year milestones and I reminded myself to be present, to drink it all in rather than getting bogged down by the long list of things to do.

The Spring Sports Banquet was a bittersweet milestone: the pride in P’s winning the MVP Award was tinged with a wee bit of sadness that his baseball career was winding down.

Something tells me that once he leaves for college next month, I’ll be looking at this photo rather often.

Baseball has been a huge part of our life. Season after season, we savored the wins and mourned the losses, and we watched this boy become a young man.

On the last home game each season, our school tradition is to honor the senior players in a post-game ceremony, in which the seniors and their families take the field and the announcer reads a letter from the parents to their son and then we present the boys with a keepsake bat. This year, P’s team was locked in a duel for a championship slot, and sadly the Knights fell short and lost the playoff bid (hence his long face after the Senior ceremony).

I’m really going to miss the sweet sound of a bat connecting with the ball. We have spent an awful lot of time in the stands cheering him on (and I spent an awful lot of time pacing the grounds during especially close games). This boy learned to hit a pitched ball at age two and never stopped swinging. Baseball was his first true love, and I suspect the game will always hold a special place in his heart.

We didn’t mourn the end of baseball too long, because shortly thereafter it was time for prom! What is it about boys in tuxedos and girls in evening gowns that is so captivating? As senior year winds down and prom night finally arrives, the juxtaposition becomes apparent: the excitement of what lies ahead, coupled with the memories of the last four years. 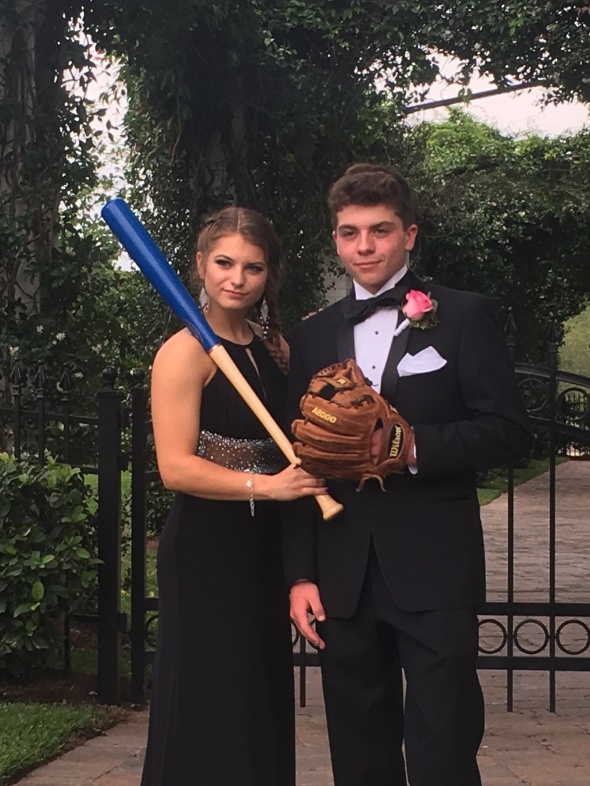 Right on the heels of prom was the graduation ceremony and party, a blur of activity and a house full of the people who mean the most to us. So much activity that we failed to take many photos (perhaps the sign of a truly good party — we had so much fun we didn’t even think about taking pictures!). 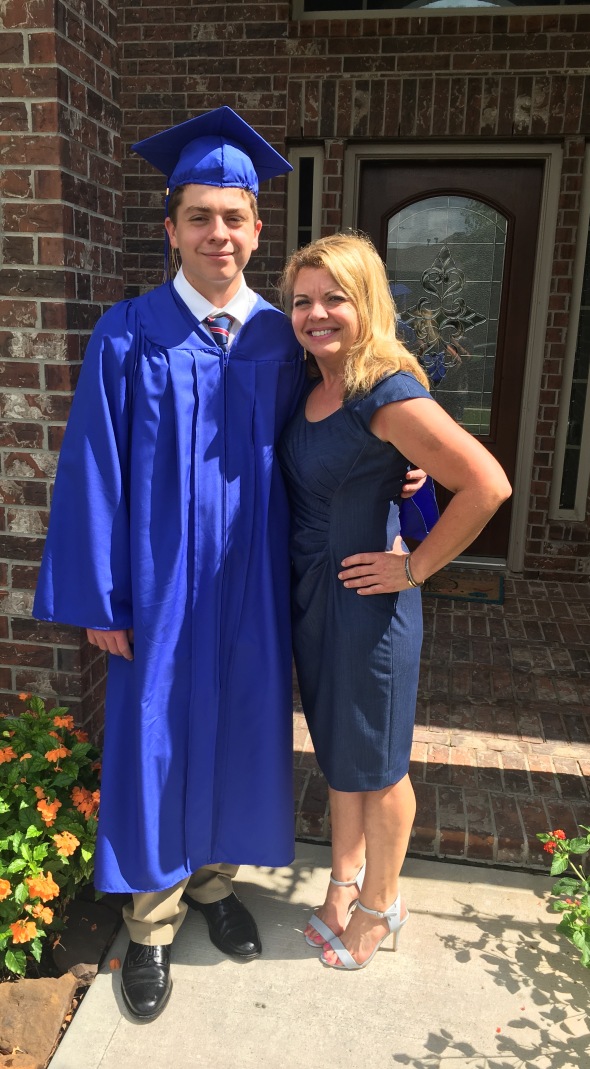 One of the highlights: this blanket made from his Little League shirts. I like the idea of him taking all those memories with him to college. 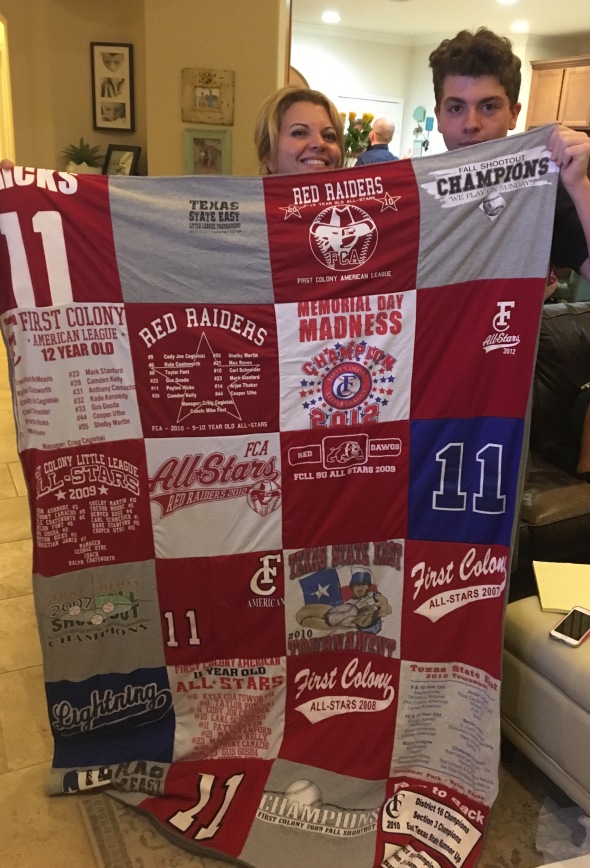 My boy was a week shy of turning 10 when I was diagnosed. Double digits for him, a double mastectomy for me.

Eighteen years ago, with the birth of this kid, I went from a being a regular person to being a mother. Eighteen years seems like enough time to prepare for the end of an era. And yet, it’s just not. I’m a believer in the notion that kids leaving home means parents have done their job. However, as it is with many things, it’s easy to be a believer before that notion becomes a reality. The tricky part is remaining a believer as one faces the end of an era. 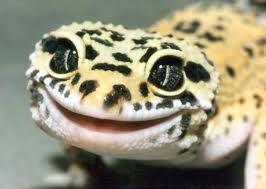 Those of you fortunate enough to know my daughter Macy know she has a love for animals that’s as big as Texas. She’s said from her earliest days that she wants to be a vet and a zookeeper. I can think of no other vocations more suited to her, and despite the fact that she may end up at Texas A&M (oh, the horror!) for vet school, I support her.

Getting a little ahead of myself, again.

Keep in mind that we already have two dogs and three fish in our house, and that on any given day I’m meeting myself coming & going just keeping up with the necessities of getting through the busy day. So when Macy asks for another animal for Christmas, I heave a big sigh and think, what’s the best way to change the subject?

This isn’t the first time she’s asked for another animal. In fact, every time we go to the pet store she lobbies hard, and that girl is persuasive. Factor in my own love of animals, and we’re lucky we don’t have more of a menagerie around here.

I knew we were in trouble this time, though, because the only thing on her Christmas list was an animal. Uh oh.

A note about this child: from the moment we saw the sonogram image of her in utero we knew she was different. Different, good, that is. That first image showed a beautiful profile with her tiny wrist laid flat against her forehead in classic Scarlet O’Hara pose, as if from the very beginning she was thinking up some form of drama to unleash on the world.

Macy has never been like other girls. She never liked the Disney princesses, and to this day can be heard muttering under her breath when she comes across one of them on TV, “That Belle is so stupid.” When all the other little girls were having a Tinkerbell-themed birthday party, Macy wanted a barnyard theme. When all her little preschool classmates were tottering off to ballet class, she was in the backyard, digging for worms and filling the birdfeeder.

So it should come as no surprise that this fiercely independent girl not only goes her own way (despite the crowd), but has stayed true to herself for all of her 8 years. Her love of all creatures is here to stay.

While her first choice for a new animal was a chinchilla, the $150 price tag turned me off, and Trevor has a strict “no rodents” rule, so she moved on to a turtle. I told her that, while fascinating, turtles stink and I’m not sure they like to be handled, so she may be disappointed with a hard-shelled creature. Next up was a bearded dragon. Considering they grow to be 3 feet long and eat live mice, the answer was not just no, but no way.

Macy has taken care of a friend’s leopard gecko, the beloved Rico, so she (and we) knew what they were all about.

So I went to Petsmart last week to look into it, see what all we would need to make her Christmas dreams come true this year.

There was a sale on leopard geckos. I love a good sale. However, that also meant, as the reptile lady pointed out, that they were selling more of the geckos, so I might want to go ahead and get mine and avoid the risk of coming up empty-handed when I was ready to purchase. Tricky sales technique, and it worked.

I brought the little guy home and set up his tank, with the two lamps and fake plants, the cave and the water dish. I put the mealworms in the fridge and thought about the best place to hide him. I settled on the guest room closet and when the kids got home from school, told them to stay out of there.

All was well. Or so I thought. I snuck up to the guest room to feed him the mealworms twice a day and to switch the lamps from day to night light. I thought I was being pretty sneaky. But a few days ago, Macy came downstairs with a very long face and a worried countenance.

After some coaxing she finally came out with it: she’d been looking for her clipboard and found the tank in the guest room closet. She was afraid she’d be in trouble, but truth be told, I was relieved that I was no longer in charge of the gecko’s care. I didn’t realize how stressful it was to keep him under wraps and alive until Christmas.

So we moved him from the guest room to Macy’s room, and she was tickled pink to know that she was the proud owner of a leopard gecko. We were busy getting his lamps plugged in in her room and so it was a few minutes before she decided to lift the cave and lay eyes on her new creature.

This is what she found. (Don’t look if you are squeamish.) 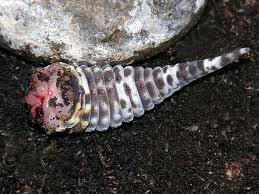 Sorry it’s graphic, but that’s life, people. The new gecko had dropped his tail. Apparently it’s common as a defense mechanism (when they’re being hunted) or in times of stress. Guess this little guy was stressed about his new home.

But the little zookeeper wasn’t grossed out, she was worried. She was afraid he was going to die. Cue the tears. Merry Christmas, everyone.

After some quick Internet research, she was reassured that he was ok, this was something that just happens and that his tail would grow back in a month. We made another trip to Petsmart to treat him to some live crickets (gecko comfort food), and all was again right in our world.

This isn’t Macy’s lizard (didn’t want to subject him to even more trauma, so we skipped the paparazzi), but this is what his behind looks like.

Kinda creepy, if you ask me. But as the little zookeeper later explained, it’s all part of life, for a gecko.