Today is a very good day, for 3 reasons, maybe more. #1: Macy started two weeks of Fine Arts camp, which she loves (and I’m rather fond of having a few hours to myself while she’s off doing fun projects that someone else cleans up, and by “someone else” I mean anyone but me). While she hasn’t gotten quite this messy in a while, she’s definitely still got it in ‘er. 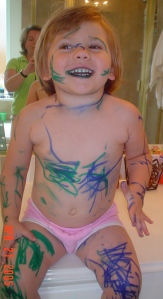 #2: I did push-ups at the gym this morning. It’s been a long time since I’ve been able to do them, and there’s a bit of pride on the line since I was working out with my 12-year-old son. I wasn’t about to let him see me doing “girlie” push-ups with bent knees, so I tried the real thing, and while it didn’t feel great, I did it. Pre-cancer, pre-mastectomy, and pre-infection, I used to be able to do 50 push-ups like it was nothing, and while I’m not there yet, I’m getting closer.

#3: The article for which Payton and I were interviewed was published in our community newspaper. Corey the reporter was nice, and I think he’s a good writer. He has covered the district All Star games for all the ages, and he’s made the games come alive in his stories. P really enjoyed being interviewed; I like the drama of the article, especially the part in which I’m portrayed as “fighting for my life” (cue the dramatic music here).

It’s a good reminder to be careful what you say, too, because I joked with Corey about P having gotten his mad baseball skills from my side of the family. While it’s true–my dad’s baseball career started with PeeWee ball in 1948 and ended with him playing for the University of Tulsa–I was being smart-aleky, and Corey not only took it seriously but also included that in the article! I certainly don’t want to sound like one of “those” baseball moms. I think my kid is a good player who happens to have some natural athletic ability and a body built for taking some hard knocks. However, I’m under no illusion that he’s going to play ball for a living when he grows up, and his *$#& most definitely stinks.

While I can take or leave the publicity, reading the latest article did make me realize that a whole lot has changed since this time last year. And most of that change has been good. Really good.

This time last year, Payton’s All Star team was preparing for the sectional tournament, which they totally dominated, BTW. But I was fighting another battle against that damned nosocomial infection and was back in the hospital. Again. So after P’s team swept the sectional tourney, they were preparing to go to the State Championship in the lovely Tyler, TX. I remember thinking on that Monday, the day I was admitted to the hospital–again–that we’d get the infection under control, pump in some more vancomycin and I’d be on my way to Tyler.

Yes, I was that delusional.

Instead of the scenario playing out the way I’d envisioned, it went something like this: I was admitted on a Monday and didn’t get out until Thursday. An area that started as a red, streaky site on the mastectomied right chest wall had to be opened up, drained, excised, and packed with gauze. Repeatedly. The packing part was particularly brutal. See, there was a bunch of fluid inside my chest wall from the infection. Dr S cut a track–sans anesthesia, I recall–to open and elongate the drain hole, to let the fluid out. Once the track was there, though, it had to be packed with gauze to soak up all the nasty fluid. It wasn’t a quick process, because the hole and the track were small but had to be completely filled with gauze, for maximum soaking. Thus, a lot of shoving in an already sore, infected, and aggravated area was required. As was a lot of xanax. At one point, after Dr S shoved the gauze into the open wound, my blood pressure was 212/65. That’s a little high for me.

I survived 4 days of intense wound-packing and hard-core IV antibiotics. But just barely. I missed the entire State Championship experience, then put my kids on a plane for summer vacation, that I didn’t get to attend. I did manage to stay out of the hospital for 2 and a half weeks, but had IV antibiotics at home and a home health care nurse packing that wound. I was hoping to have turned a corner after all that (and more than once wondered what it would take to finally kick that infection) but was back in the hospital again the week before school started.

It was not a good summer, to say the least. This one has been much, much better. While the bar wasn’t exactly set very high after last summer, this one is pretty sweet.

4 Comments on “No autographs, please”