← I’m trying really hard…
One of the many hard truths →

Yesterday was pretty crazy. We were stranded Sunday night in Boston because of weather and heavy air traffic in the New York area, and had to spend the night in a hotel. We made the best of it, but being a day behind schedule bugs me and my type-A ways, especially when my to-do list is long and my time for completion is short.

I’ve traded the beach views for the view of the lake across the street, and while the vacation was fabulous, there’s no place like home. I love the beach and never tire of the sound of the crashing waves, but there is something to be said for the comfort of sleeping in my own bed.

Monday was supposed to be my day to “get ‘er done” and take care of all the pre-op chores. I did indeed get it done, but was half a day behind because instead of hitting the ground running, I was traveling from Boston to Houston. Don’t be jealous when I tell you I spend yesterday unpacking, going through a big stack of mail, sorting the recycling, doing laundry, getting groceries, organizing school supplies, returning phone calls, and giving thanks & treats to our pet sitters.

Today would have been a similarly busy day, but instead of wrapping up last-minute things before the surgery, I was fielding a call from my doc’s office tell me that the surgery had to be postponed. The surgical center that he uses for the type of procedure I’m having is under construction and behind schedule. Did I mention that I don’t like a change of plans?

My brain has been racing with details of the to-do list, and unwelcome thoughts of the surgery keep bulling their way in. I’ve been strangely nervous about this procedure. I expected to be joyful and excited but instead I’m uneasy. This should be a piece of cake compared to the many previous procedures; it’s out-patient for once. It also should signal my approaching the home stretch. I’m not there yet, but with this surgery behind me I would be one step closer.

So why the nerves? As REM would say, “What’s the frequency, Kenneth?” I have no idea, but perhaps it was my instinct telling me it’s not time, it’s not going to happen. Perhaps it’s the proximity to the start of school and the end of summer. I’m not good with transitions and definitely don’t like change (part of the Type-A package, perhaps?); even though the shift from summer to starting school is usually quite welcome (for me, but not my kids), I’m struggling this time around. I’m all ready, but still feel like there’s not enough time. This procedure has been in my mind a harbinger of the end of summer and the beginning of the elusive pursuit of getting back to “normal.” When I endured The Big Dig in March, I knew that as gee-gantic as that surgery was, it wasn’t the end of reconstruction and that a couple of revisions would be required. Once everything settled, so to speak, after The Big Dig, I was left with a decidedly less-sunken chest and absence of post-mastectomy-infection scar tissue. Things were much improved in the chest region. However, as with most masterpieces, the first draft wasn’t the final draft.

The second draft was scheduled to commence at 6:30 a.m. tomorrow in a hopefully-germ-free surgical center instead of the mega hospitals I’ve been in for the previous gigs. The goal is to reallocate some fat from the ends of the 17-inch belly incision to fill in the not-quite symmetrical boobage. I’m requesting that my doc fine-tunes my belly-button scar, which is kinda grody, and  he will also work his magic on the spots of scar tissue along my belly incision. There are several pea-sized spots that are quite the menace: pain, throbbing, and impaired mobility top the list. 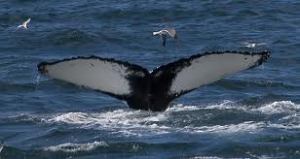 I hope that there will also be some cleaning up of the “whale tail” ends of the belly incision. As the moniker suggests, the ends of that big-ass incision look like a whale’s tail, and while I marvel at the giant sea creatures, I don’t want a facsimile on my bod. Thank you, googleimages, for the visual. Imagine that lovely tail upended vertically instead of horizontal and you’ve got a good idea of what the ends of my giant incision look like.

But alas, none of this will happen tomorrow, and I have to wait. In addition to not liking a change of plans, I’m not a big fan of waiting either.

The reason for the delay is legit, yet my cries of “find me another surgery center so we can stay on schedule” went unheeded. It seems that the surgery center I was scheduled for has the right equipment for the fat transfer procedure, and while we certainly could find another gig, there’s no reason to rush it and every reason to wait until all the conditions are right. Not every surgery center/hospital has the stuff my doc needs to suck out my fat, and the one that does have the right stuff isn’t accommodating patients just now.

Three things about my visit to the doc today that were unpleasant, besides the news of the delay. First, he introduced a possibility that I had not considered: infection.

The very thing that dominated my life for most of the past year is now conveniently shelved in the way-back recesses of my brain. I hadn’t even thought about the possibility of re-introducing or re-acquiring an infection. Yet as my doc lovingly pointed out, with me you just never know.

So he’s thinking of sucking the fat out of the dog ears and throwing it away. Sounds great, right? Get rid of the little bulges at either end of the big-ass incision. I’m all for that. But then what do we use to smooth out the not-so-round part of my newly constructed chest?

And that brings us to the second thing that was muy unpleasant during my appointment today: the search for other sources of fat.

I thought I’d plumbed the depths of humiliation with the “grab the fat” game we played more than once in preparation for reconstruction. In this game, the doc asked me to drop my drawers so he could grab my belly fat and determine if it was plump enough and plentiful enough to construct a new set of knockers. In a modified game of Twister, he had me sit, stand, and lean over to see just how much fat I had around my middle. Not once, but twice.

Humiliating doesn’t quite cover it.

But today, it was total humiliation, all humiliation all the time. I was basically splayed out like a deboned chicken on the exam table while he searched and plotted. Ladies and gents, just imagine your least favorite body parts being put under the microscope so to speak. Just consider for a moment being asked to stand up, sit down, and contort your body in the absolute least-flattering ways so that the softest, flabbiest, most-despised parts of your body are on full display. And then have those parts analyzed and calculated to determine just how fatty they are. We go to such lengths to de-emphasize these body parts, yet mine were being trotted out like the prize-winning hog at the state fair.

And in closing, we’ll cover the third and final unpleasant thing about my dr’s appointment today: prophylactic antibiotics.

Yes, that’s right: I used the “A” word. Antibiotics. Again.

I’m going back on my old friends Bactrim and Minocycline as a preventative. Just in case any wily bacterium were thinking of re-establishing a house party on my dime. I’m nauseated just thinking about it. I spent how many days taking the dynamic duo? 267. Yep, 267 straight days of swallowing 2 pills every 12 hours.

Is there no end to this madness?

9 Comments on “Change of plans”