So it’s Tuesday, and I’m still recovering from my weekend. Lest you think it’s because of all the wild partying I did, let me set the record straight. My brain has decided it’s time to be back to “normal” after my latest surgical procedure (whatever the hell “normal” is), but my body says it still needs more time. Going about what used to be everyday business for me still wears me out. As much as I try to fight it, it’s true. As much as I want to pretend it’s not so, it really is. And as much as I hate it, it’s reality.

Friday started with me spending 2 hours trying on bras. My brain decided it’s time to start wearing a bra again; to pretend to be “normal” and be like every other girl out there. My body, however, said, “Nah, normal is overrated so we’re gonna fly our freak flag a little longer.” If you think it’s hard to fit a square peg into a round hole, try fitting an elliptical boob into a standard bra cup.

Friday evening was Macy’s mock swim meet, to prepare all the kids who now swim year-round but who have never participated in a swim meet. My little fish knows what to do at a meet, so it was old hat for her, but not for the hordes of screaming masses congregated around the pool. After my looooong, unproductive session in the dressing room, being around tons of hepped up kids wasn’t my idea of fun. As luck would have it, there was a lounge chair at the end of the pool, so I grabbed it and thought longingly of an ice cold Negro Modelo. My “luck” was short-lived, as the area near my chair was where all the swimmers gathered to line up in their heats. No wonder that chair was available. Now I needed two Negro Modelos.

After a very long 2 hours, we were released from one of my personal versions of hell, and we skipped on over to the next neighborhood for some pizza & fellowship with Boss Lady and the Rajah. Good times, and I don’t mean just the bottle of champagne I had to myself.

Saturday morning was my much-anticipated return to the tennis court. I won’t say my game hasn’t suffered in the last several weeks because you loyal readers are much too nice to lie to. Let’s just say that the elliptical boobs wreaked havoc yet again and that my tennis game is all kinds of messed up. Who knew it would be so hard to serve with half a breast in one’s armpit? A good time was had by all nonetheless, and I did manage to rock a few nice passing shots despite my multitude of double-faults.

After tennis we had to skedaddle across town to buy not one but two cars. Ok, we didn’t have to, but we did. We got some rain Saturday for the first time in a coon’s age–about three months, to be exact–and while there are some people who would say something smart-alekey about the odds of Houston finally getting a good deluge on the same day we buy two new cars, I am not one of them. The fact that it hasn’t rained in Houston enough to measure since June 22nd but poured buckets on my new car day didn’t bother me one lick.

After two weeks of driving the adorable red Fiat 500C everywhere I could, I made it legal, and she is now mine, all mine. 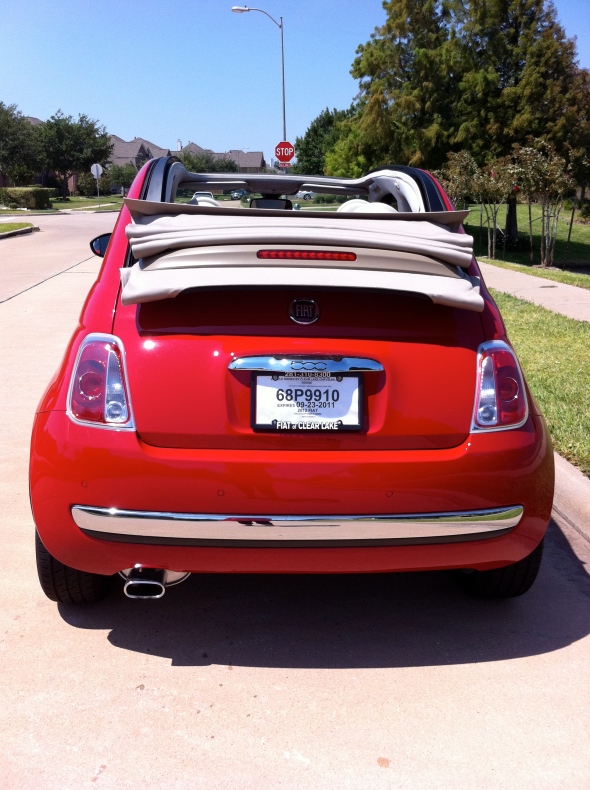 Yes, she really is that cute in real life.

The dealership has a 50 club for the first 50 Fiat buyers, and I’m officially in it. I got to sign the canvas on the wall, and I may change my name to 21. If Chad Ochocinco can do it, why not me? If anyone is ready for a fresh start, it’s me.

Our reward for our super busy day was sushi and fantastic cocktails with two of my favorite people, Thad & Yvonne, at a new restaurant. The blood orange martini was sublime, as was the gigantic platter of sushi.

I still can’t decide which was my favorite, but it may have been the special red snapper sashimi we had before the gigantic platter. If you go there, ask for Sonny for your waiter. He was knowledgeable about the sushi, but more importantly, he recommended we order the martinis without the simple syrup but with extra alcohol. My kind of guy.

Sunday there was more fun to be had, with a trip to the Metropolitan Food & Entertaining Show at Reliant Park. The highlight of the show was seeing Paula Deen in the Celebrity Theater. Listen, y’all: she’s a hoot. I’ve seen her show on Food Network a few times, and I’ve tasted her recipes at potlucks and cocktail parties, but to be honest, I don’t follow her because I’m afraid that if I eat the way she cooks, I won’t be able to fit in my chair to write this blog. Yes, she does love butter, but there’s more to her than fried food.

Namely her outsized personality. She’s funny, warm, and honest. Even though we were surrounded by 2,500 screaming fans, she made it feel like we were sitting around her kitchen table chatting. Her husband, Michael, was with her, as was his brother Hank and a chef. Just offstage was Hollis, who I gather is her bodyguard. He just got some new teeth, and she encouraged the camera to zoom in on him so he could show them off. I got the distinct impression that Hollis isn’t one for a lot of smiling, and Paula likes to poke at him a bit.

Clearly, she and Michael have a great relationship, and the banter was flying between them. During the Q&A session, Michael proved to be as quick-witted as Paula had said he is when an audience member asked Paula if she remembers the very first thing she ever cooked. Before she could answer, Michael said “Dinosaur!” 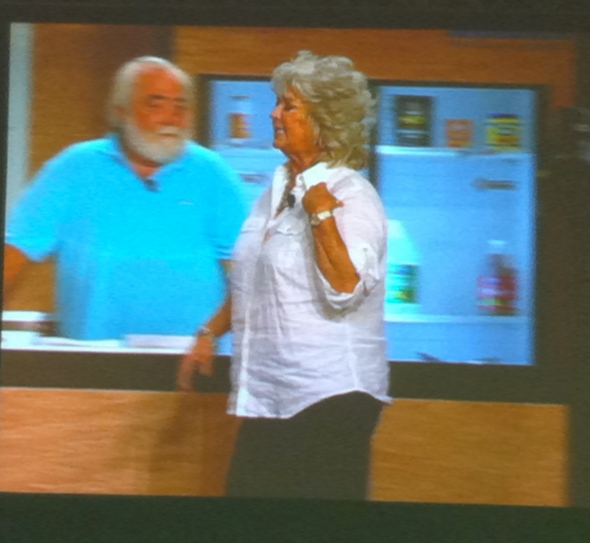 It was hard to get a good shot of her, even though we had good seats; this will have to do. If you’re a foodie like me and are wondering what she cooked, the answer may surprise you. She didn’t cook anything. The guys did all the cooking so she could visit. They made bacon-wrapped chicken thighs, macaroni & cheese, and apple cake. The food wasn’t the highlight: Paula was. It was like an evening at the Improv, and she had the audience roaring with laughter.

She reiterated that she’s not a classically trained chef, saying, “I ain’t a chef, I’m a cook, baby!” Talking about the food the guys were cooking, she said it was “so good it’ll make your tongue want to slap your brains out.” And she said she loves Texas girls because we have “the biggest hearts, the spirits, and the biggest hair.”

Paula Deen is one smart cookie. And that was one fun, but tiring, weekend.