← Happy New Year!
Another BC casualty →

It was a most excellent Christmas at our house this year. So good that I’ve been rather busy doing all things festive and haven’t blogged in several days. I have a good reason, though, for my lack of blogs. A very good reason. 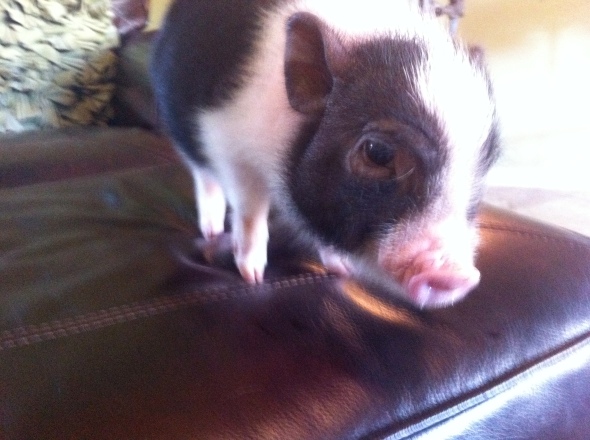 She’s Macy’s big Christmas gift this year. If you’re inclined to tell me I’m crazy for letting my 9-year-old have a pet pig, don’t bother. I already know it.

But spend just one second peeking at the look on Macy’s face and you’ll understand the craziness. The insanity. The absolute lunacy.

Here’s the thing: we need another animal in this house like we need a hole in the head. But Macy’s BFF is moving to Corpus Christi in the next couple of months, and my girl needed a distraction from the heartbreak that is losing your best friend because of a job relocation. My BFF moved to Dallas when I was a kid, and I’m still not over it.

Plus, my girl has loved pigs her entire life.

When most little girls were enamored with horses or kittens, my girl was attracted to piggies. She’s always thought the swine is fine. We have every piggie gadget on the market: flashlights, key chains, tiny frying pans, magnets, bookmarks, sink stoppers, ink pens, Pez dispensers, spatulas, egg timers, egg cups, mugs…the list goes on. If there’s a pig-related product out there, my girl has it. People who know and love her see a pig-themed item and buy it for her.

For her 3rd and 4th birthdays, she had pig-themed parties. 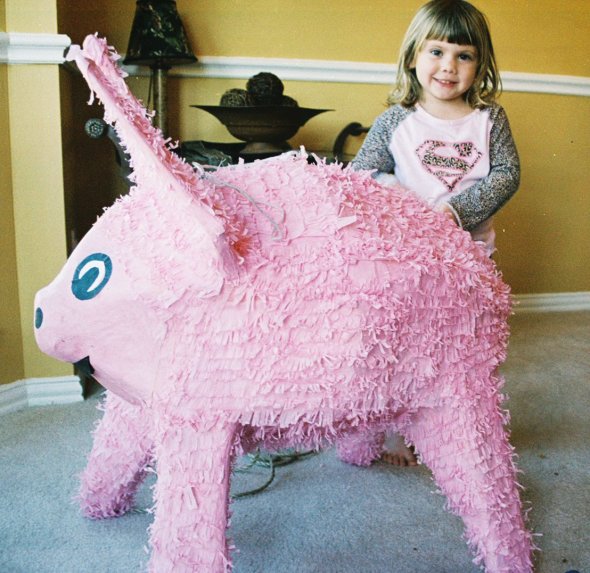 One year we had a pig pinata, straight from Mexico.

This girl has always loved pigs.

She’s wanted a teacup pig as long as I can remember. We always said, someday.

And now, someday is here.

My girl did her research. She looked online for weeks to find photos of teacup pigs for sale. She emailed breeders and called farmers to see if there was a pig that matched her criteria, just in case we said yes to the pig. She made a list of all the reasons she wanted a teacup pig. I admire her thoroughness and tenacity, but we really need to work on her spelling.

This is the breeder’s photo that made her heart go pitter-patter:

Who wouldn’t want that little piggie?

See, the piggie my girl wanted was in Ohio. The breeder has a farm there and a farm in a small town about 75 miles from Houston. The piggie was going to fly from Ohio to Houston, and the breeder would pick her up then meet me to hand her over. Simple, right?

I was at the assigned meeting place on time and ready to take possession of the pig. I had a blanket, a beach towel, and Macy’s bathrobe, so the piggie could get used to her smell. The breeder had a drained phone battery and no sense of direction. None. Not even a teeny bit.

She texted me to say the plane was a little late but that she’d be at our appointed meeting place 30 minutes late, and that her phone was dying. She’d told me that she was driving a black Ram truck. I waited somewhat patiently in the Long John Silver’s parking lot next to the pawn shop and the Parrot Cove lounge with my bud Christy. Who knew that pawn shop was such a happening place 3 days before Christmas? A steady stream of cars, including 5 black Ram trucks, turned into the parking lot, only to head straight to the pawn shop. Not one of those trucks has a teacup pig in it. Two and a half hours later, the breeder finally called. She had no idea where she was and even less idea how to find me.

Long story short, our simple exchange took 5 and a half hours to conduct. Once we finally found each other and exchanged the pig, we had an hour’s drive to get her home. Poor little piggie had been yanked away from her mama and siblings, put on a plane, driven around in a truck with a directionally-challenged driver, then dropped into another car for another long car ride. Poor little piggie.

The stress of the exchange was quickly snuffed by two bottles of champagne shared round with great friends who turned out to meet the new addition. And the look on Macy’s face when I walked into the house with that little black & white bundle in my arms was priceless. At first she thought the pig was a stuffed animal and that I was “pranking her.” Once she realized that it was not only the real deal but also the pig she wanted most, she was overjoyed.

The champagne drained and the friends departed, it was time to put the little piggie to bed. Her first night was a breeze and she slept soundly. The next day was a bit chaotic, though, with a trip to the feed store to buy piggie supplies as well as all the last-minute Christmas preparations, baking, and wrapping. Out of all the research Macy did on teacup pigs, it never clicked with me that it’s rather like having a baby in the house at first. Piper was needy, hungry, scared, and poopy. Several times a day. Thankfully the little zookeeper cared for Piper while I made the Christmas magic happen, and before the end of the second day, Piper had learned how to use the litter box. She’s a smart little piggie.

She sleeps in Macy’s bed and prefers to be snuggled under the covers. That’s her backside and one rear foot poking out of the sheets.

Piggies get along with all animals, and will walk on a leash like a dog. They love to snuggle and be part of “the pack” and be involved with the family. Our little piggie makes lots of different noises, from grunts and snuffles to sighs and chirps. She comes when we call her, and follows us around the house. She’s not the least bit shy about jumping right into our laps, and this morning when Macy was taking a bath, Piper jumped right into the tub! Teacup piggies don’t need baths, but they do need a little baby lotion once a week. Their skin gets dry from being inside. They don’t stink or shed (which is more than I can say for our dogs), they will use the bathroom outside, and they don’t need vaccinations. 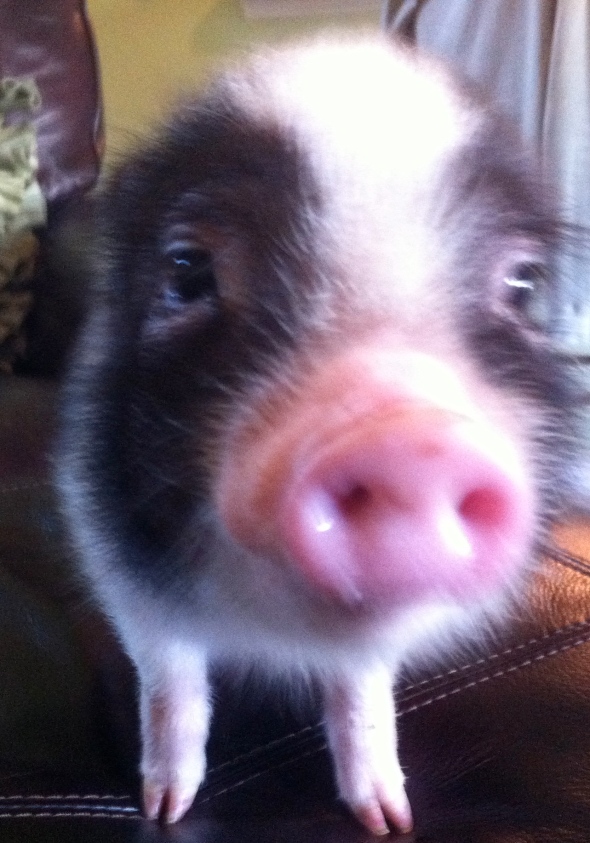